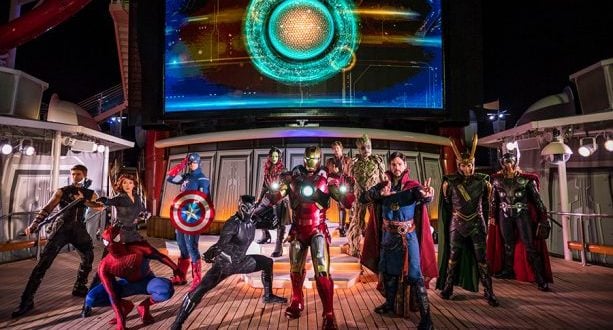 Is there anything funnier than imagining the Avengers at Walt Disney World? Picture Thor on the Monorail! If these amazing superheros were to take a well-deserved trip to the most magical place on earth (and space), we think these are some of the rides and attractions they would love:

We think Doctor Strange would get a kick out of Spaceship Earth. Not to say he wouldn’t knit pick every tiny little detail, but he’d at least have fun. He would think it’s funny how the Imagineers portrayed time travel, but appreciate that it’s something we value, even at a theme park.

Come on, wouldn’t Quill just love this one? Astro Orbiter in Magic Kingdom’s Tomorrowland is such a fun ride, but especially for someone who knows all about actual spaceships! We can totally see him singing something from his mixtape at the top of his lungs, while moving the joystick like crazy – probably annoying Gamora to no end.

We imagine Cap just sort of geeking out in The American Adventure. Picture it with us: he stands at attention in the back of the lobby, listening intently to the Voices of Liberty, with his hand on his heart. In the attraction he is riveted, nodding emphatically, and welling up at the finale. He’d probably spend a good couple of hours there.

Honestly, we think Iron Man would have liked Innoventions (RIP) best, but since that’s no longer an option, Test Track is a good second. Tony would have so much fun fiddling with the car design feature before the ride. We can just see him trying to tell Cast Members how to make it better and Pepper pulling him through the queue.

We can hear it now: “Hey Mr. Stark, you wanna go on this ride with me? It’s based off a really old TV show, I don’t know if you’ve heard of it, called the Twilight Zone or something.” Peter would love Tower of Terror for the retro factor but also because he loves big thrills and the ability to scream really loudly.

We thought long and hard about what Nat might truly enjoy at Walt Disney World. While we think she’d have a perfectly good time hanging out with Clint and his family, she would also think Rockin’ Rollercoaster is pretty fun. Nat is all about high action, fast speeds, and intensity. This ride has all of those things for her. Plus a killer soundtrack.

This one is pretty simple: Rocket gets to shoot stuff. To be honest, he’d probably be pretty obnoxious and yell un-park-friendly things to the little green aliens. In fact, he might even try to jump out of the car and just attack things. But he’d have a lot of fun. We’re almost positive he’d be a Galactic Hero!

8. Thor – Rise of the Resistance

Thor would be all over this Galaxy’s Edge ride. Rebellions are worthy causes, and one must be worthy to be a rebel, so Thor would definitely approve. Plus it’s in space so he’d feel right at home. He would get so into the story. As he entered each scene, he’d be shouting at the Storm Troopers and cheering with Rey. He’d probably scare a few guests, to be honest.

You don’t have to speak Groot to know he would love Tough To Be a Bug. Groot would be so happy to get to go inside a tree and watch a fun show! He’d probably want to spend a lot of time walking around the Tree of Life after the show to point out all the animals or just hang out with the bark. Ant-Man would just love to be with other ants.

How cool would it be to have Sam on your left riding Soarin’? We think Sam would have a blast on this ride because it’s what he gets to experience as the Falcon every day – without a bunch of stuff blowing up all the time. We imagine he’d love to take Cap and Bucky to show them what flying is like.