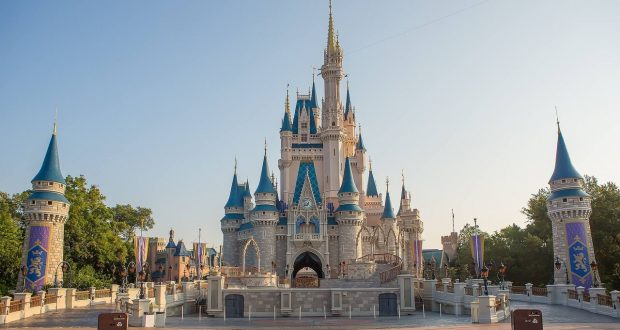 How Well Do You Know Walt Disney World’s Magic Kingdom?

Magic Kingdom is the theme park that Walt Disney World is known for throughout the world. The iconic castle makes it easily one of the most recognized places in the United States.  How well do you know Magic Kingdom? The rides? The shows? The history? See if you know the answers to these questions below.

1. How fast do you go on Space Mountain?

Riders travel at top speeds of around 23 mph while traveling through space.  Space Mountain continues to be one of the most popular attractions in Magic Kingdom.  Opening in 1975 with fireworks, astronauts and a party like only Disney can do, this ride decades later continues to draw high crowds.  Although it isn’t as fast as Rock n’ Roller Coaster and Expedition Everest, this space flight takes riders through the galaxy like no other ride in Disney. 2. How many countries are displayed in “it’s a Small World?”

This happiest cruise that ever sailed around the world can be found in Fantasyland at the Magic Kingdom.  Originally created for the 1964 New York World’s Fair and then making its debut in Disneyland at Children of the World, this ride is a classic Disney attraction.  Guests travel through Europe, Asia, Africa, South America and the South Pacific on this joyous boat ride.  During the boat ride, guests are able to see figurines representing children from around 34 different countries from around the world.

3. How much water is used on Splash Mountain?

Splash Mountain is one of the favorites in Magic Kingdom.  Guests are taken on an 11-minute ride as they follow the story of Brer Rabbit, Brer Fox and Brer Bear.  Opening in 1992, Splash Mountain has become a must do ride for most visiting Magic Kingdom.  With top speed reaching 40 mph and the final drop being 52.5 feet, guests can scream their way through the fun.  It takes approximately 965,000 gallons of water to keep Splash Mountain moving along. 4. What rivers does the Jungle Cruise travel through?  Bonus Question:  How many boats are there?

If guests are ready for an adventure, they will want to board a boat on the Jungle Cruise.  This 10-minute ride will take guests on a 10,000 miles long journey through the rivers of the Amazon, Congo, Nile and Mekong.  Along the way guests will experience laughs, dangers and excitement like only Disney can bring to an experience.  Watch out for hungry hippos, backsides of waterfalls and angry headhunters looking to add to their collection.  There are 15 different ride vehicles that take guests along this journey all with unique names such as Amazon Annie, Nile Nellie and Congo Connie.

5. What are the names of the four trains used for the Walt Disney World Railroad?

Walt Disney was a passionate train enthusiast.  This passion brought steam powered engines to Magic Kingdom for opening day in 1971.  There are currently four trains originated from 1916-1928 that were refurbished to use in the Magic Kingdom.  When running, guests can take the train around the Magic Kingdom on the 1.5 miles trip with stops in Frontierland and Fantasyland.  The names of the four trains are Walter E. Disney, Lilly Belle (named after Walt’s wife), Roy O. Disney (named after his brother) and Roger E. Broggle (the Imaginer who designed the Disneyland and Disney World Railroads).  An iconic part of Magic Kingdom, the Walt Disney World Railroad is a must do for guests visiting the Magic Kingdom. 6. How many elephants are used in the Dumbo ride?

Dumbo the Flying Elephant is one of the classic rides in Magic Kingdom.  Opening along with the park in 1971, this ride became a fast favorite of little ones causing the ride wait times to be hours long.  With the opening of Storybook Circus in 2012, Dumbo saw some great improvements.  Doubling in size and adding in a play area were the major updates brought to this ride.  Doing this brought a total of 32 elephants for guests to ride and has drastically helped with wait times.  If this is still a must do, guests can take advantage of the play area as they wait to board their flying elephant.  It will be exciting to see what happens when the new movie comes to theatres.  Will this increase the popularity of this classic ride?

7. What does the city display seen on Tomorrowland Transit Authority PeopleMover represent?

This is one of the best hidden secrets in the Magic Kingdom.  This slow-moving elevated train track takes guests throughout Tomorrowland.  Opening in 1975 at Walt Disney World this 10-minute ride allows guests to sit back and relax.  While on this ride, guests will see the inside of Space Mountain, hear jokes from Monster’s Inc and experience great views of the Magic Kingdom.  This unique ride is actually a look back at Walt Disney’s vision of a utopian city.  Guests can see a small display of Walt’s Progress City (EPCOT) as they enter one of the tunnels on the PeopleMover.  Even though Walt’s dream of a progressive city never came to be after his death, guests can see a display of what it might have been while relaxing on the PeopleMover. 8. What is the original name of the fort on Tom Sawyer Island?

Tom Sawyer Island is an often-missed attraction at Walt Disney World.  As it is out of the way, many guests skip over this unique playground.  Opening in 1973 and designed to bring to life aspects of Mark Twain’s stories of Tom Sawyer and Huckleberry Finn, guests can explore caves, cross bridges and discover new adventures at every turn.  Harper’s Mill and Potter’s Mill (named after Tom and Huck’s friend Muff Potter) are two areas that guests can explore.  Fort Langhorn, originally called Fort Sam Clemens after Mark Twain, is another unique area that young guests can explore and create their own adventures.

9. How many steps are in the Swiss Family Treehouse?

The Swiss Family Treehouse is another attraction that many guests choose to pass over while visiting the Magic Kingdom.  Opening in 1971 this 15-minute walk through allows guests to see parts of the Swiss Family Robinson story up-close.  One example of this is a pulley system that shows guests how water and other items reached the top of the treehouse.  This unique tree in the middle of Adventureland is 90 feet tall, 60 feet wide and has around 1,400 limbs and 330,00 leaves.  Guests will have to climb 116 steps in order to experience it all. 10. How tall is Cinderella’s Castle?

The most iconic part of Walt Disney World is Cinderella’s Castle in the Magic Kingdom.  This fairytale castle is based on castles of French royals from the 12th and 13th century as well as the movie Cinderella.  Although it is nearly impossible to stay in the famous Cinderella’s Suite, guests can dine in the castle.  Cinderella’s Royal Table is a great dining option for families with princesses.  Here they can meet a variety of princesses including Cinderella herself.  The castle itself is made up of steel beams, plaster, concrete and fiberglass allowing it to stand up to hurricane strength winds.  It is also designed to look bigger than it actually is.  The castle itself comes in at a magical 189 feet tall and continues to be the most famous icon of Walt Disney World.

Did you know all of these little facts about the Magic Kingdom?  Hopefully you were able to learn a little more about Magic Kingdom and the rides that make it special and unique.