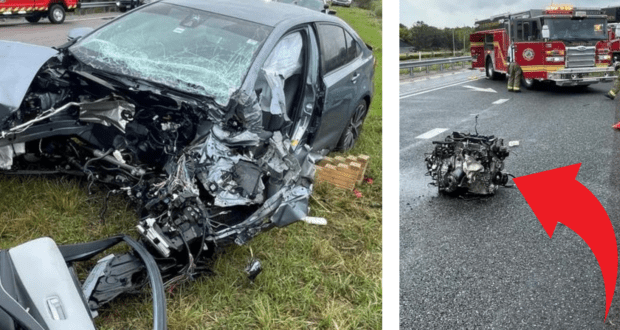 A driver of a sedan was hospitalized Thursday after a head-on collision with a semi-truck along Florida State Road 429, and the impact from the collision dislodged the sedan’s engine, sending it hurtling through the air into oncoming traffic before landing in the road.

According to ClickOrlando, and the Florida Highway Patrol, the crash happened around 12:20 p.m. on Thursday along State Road 429 near mile marker 19 in Winter Garden, about 10 to 12 miles from the Walt Disney World Resort. The driver of the sedan lost control of the vehicle on a northbound lane of State Road 429 before crossing the grass median and striking a semi-truck head-on, according to the Florida Highway Patrol. The semi-truck was traveling in a southbound lane along SR 429. The collision resulted in the temporary closure of all southbound lanes of the state road, according to FHP troopers.

According to the Florida Highway Patrol, the collision also resulted in the sedan’s engine becoming dislodged and flying into oncoming traffic, striking a sport utility vehicle in a northbound lane before landing in the middle of the roadway. The collision caused the driver of the semi-truck to hit a guardrail. ALSO READ: Trip to Disney World for the 50th anniversary celebration ends in horrific tragedy for this East Coast family

The driver of the sedan was transported by paramedics to the hospital with critical injuries.

The driver of the semi-truck was uninjured, as were the occupants of the sport utility vehicle that was struck by the dislodged engine.

It is not clear at this time what caused the driver of the sedan to lose control of the vehicle and cross the grass median, ultimately striking the semi-truck head-on. At this time, there has been no mention of alcohol or weather involved in the collision.

2022-03-25
+Becky Burkett
Previous: Disney Ignored Pleas From Parks, Experiences and Products Leaders to Speak Up Against Florida Bill
Next: Expensive Disney Merchandise Ruined After Being Cleaned The Way It Was Supposed To Be