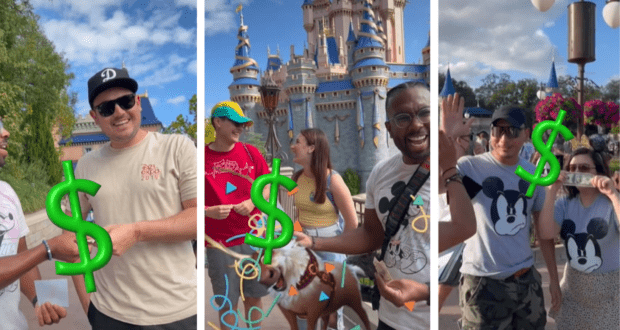 A pair of internet influencers and Disney superfans gave away loads of cash to other Guests at the Walt Disney World Resort. All the Guests had to do was know their Disney trivia and answer a Disney trivia question correctly. 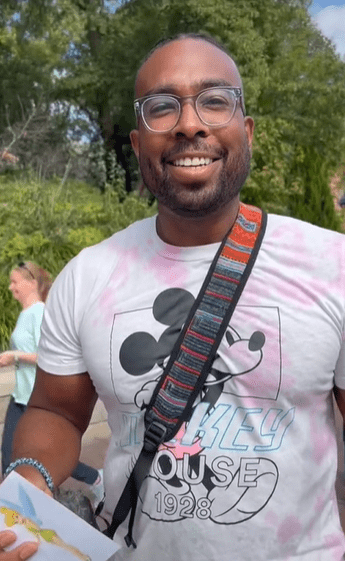 Cullen Griffin and Alyssa Griffin, better known as “Griff and Alyssa” on YouTube and TikTok, are influencers, Disney fans, and vacation experts from the Sunshine State. On a recent visit to the Magic Kingdom theme park, the Disney duo doled out the cash to other Disney fans who really know their Disney trivia.

Why do they do it?

Well, according to Insider.com, Griff and Alyssa say they just wanted to have fun and inspire people at the parks to start conversations and engage with each other.

RELATED: Wife is determined to set sail with Mickey, but her husband has a few hoops for her to jump through first 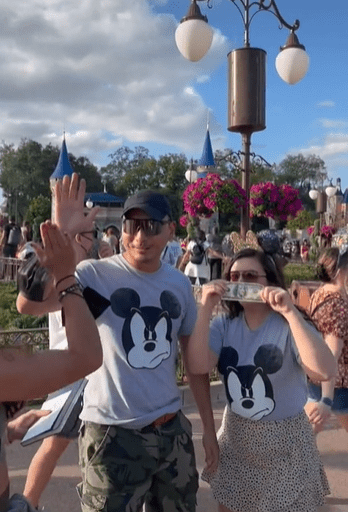 It’s not something you see every day on a Disney vacation, after all. Most Guests in the parks at Walt Disney World are looking for ways to save their money–to stretch those vacation dollars, so when Griff and Alyssa stormed the parks, cash in hand, just looking for other Guests to give it to, some were skeptical.

The couple was inspired by another YouTuber, who goes by “Mr. Beast,” who randomly gives money away to strangers, but Griff says it wasn’t as easy as you might think.

“Mr. Beast makes it look so easy, but when you ask someone if they want to answer [a] trivia question for money, a lot of them are like ‘No thank you,'” Cullen Griffin said. “People thought it was a trick.”

Alyssa says it took a little time, but after several attempts at engaging other Guests and “picking random people” who seemed like they might be open to the prospect of playing a Disney trivia question game at the parks for cash, the couple was finally able to find several willing participants. 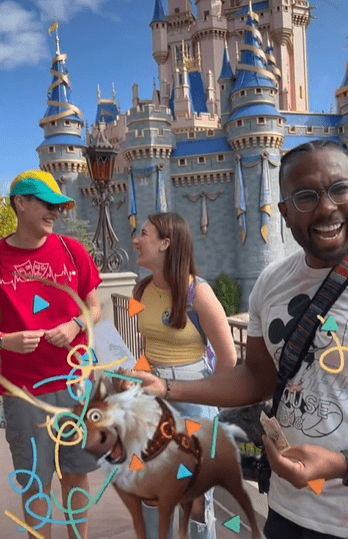 The Disney duo filmed their fun Disney trivia game in the parks earlier this year, and in that video, the couple gave away $1,500 to other Guests at Magic Kingdom. They later created a compilation video of all the Guests who participated in the game and posted the video on YouTube, where they have more than 50,000 subscribers. Then they began sharing shorter clips from the compilation video on TikTok, where they have close to 120,000 followers.

Griff and Alyssa post travel content on their YouTube and TikTok channels through their blog called “Trapped in Paradise TV,” and they operate an apparel company called Paradise Adventure Co. The company sells hats, sunglasses, and other accessories vacation-goers take on their trips. They have a small marketing budget for their company, and when there was a little leftover, the couple decided to give it to others.

They thought “it would be fun to just give it away.”

In one video, a Guest at Magic Kingdom correctly named all seven of Snow White’s dwarfs, netting the Guest $100.

Thanks for playing, @Madison Riggins ! Could you guess them all?? Full video on YouTube. #disneycreator #disneyworld #trivia #fypage

Another Guest won $50 after he correctly identified a picture of Tinker Bell.

Two more Guests were up for the challenge, and they won $50 for knowing Sven’s name from Disney’s Frozen.

Another couple knew exactly who Pegasus is in Disney’s Hercules, and when they named him correctly, Alyssa presented them with a $100 bill for their Disney trivia question prowess.

The couple looks for Guests enjoying a Disney vacation who seem approachable and who could use a little magic in their day, thanks to cash earned by answering a Disney trivia question correctly.
“There’s nothing better than scoping out people and choosing that stressed-out dad who’s pushing strollers and carrying a hot dog in his hand,” said Griff, who shared that one participant teared up after winning the cash.

“One couple went straight to buy Dole Whip,” Griff explained. “It was their first time at Disney and they were wearing matching T-shirts. Another guy went to buy his family lunch, and a family said they were going to buy souvenirs. It’s so great to see people’s reactions.”

And if all their questions seem too easy, Alyssa says that’s not always the case.

“We asked quite a few families and couples who the princesses were, and a lot of them did not get it right,” Alyssa said. “I would like to ask some harder questions, but we wanted to find some success as well.”

Guests who didn’t answer the trivia questions correctly weren’t sent off empty-handed, however. Even though they didn’t win the cash, Griff and Alyssa handed out sunglasses from their company, Paradise Adventure.

“We did this all in one day. But we go to Disney frequently, and we plan on doing it again,” Alyssa said.

In their compilation video on YouTube, Griff says the couple will give away $10,000 if their video got more than 70,000 likes.  They’re not there yet, but they have amassed almost 6,000 more YouTube subscribers since posting the clips of their Magic Kingdom trivia games.

“The pandemic has been awful; we didn’t get to socialize with anyone,” Griff said. “I think fast-forwarding to seeing laughter and people communicating again, that’s so cool. It feels really good.”

2022-04-07
+Becky Burkett
Previous: D23 Gold Members to Get EARLY ACCESS to Guardians of the Galaxy: Cosmic Rewind!
Next: The Most Unique Snacks at Disney Resorts