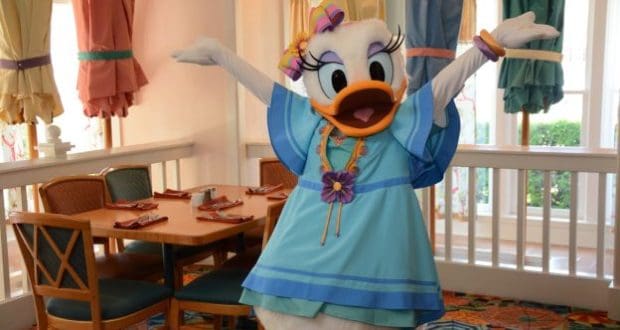 Daisy Duck is one of the lesser-known Disney characters. She tends to keep a lower profile than her Fab Five pals, and because of this, there are several things that most Disney fans don’t know about her, unless she happens to be their most favorite character. So as not to leave anyone out, we wanted to do our best to let you in on a few fun facts and secrets about Donald’s favorite girl, so without further ado, here are eight things you probably didn’t know about Daisy Duck, but that you’ll be glad you found out!

8. She’s younger than most of her closest pals.

7. She has an extensive family within the Disney empire.

We know that Daisy has at least one sibling because she has three nieces—April, May and June. Fans learned this in the February 1953 edition of Walt Disney’s Comics & Stories, no. 149. She also has an aunt named Drusilla, a cousin named Almanda de Quack and a grandmother who goes by the name of Lilly. Disney’s D23 official fan club site says that Daisy is the sister of Huey, Dewey and Louie’s father, which would make the trio her nephews.

6. Her character has been voiced by many people.

She was first voiced by Clarence Nash in her 1940 debut featurette, Mr. Duck Steps Out. From 1945 to 1950, she was voiced by the beautiful Gloria Blondell, except for once in 1948, when she was voiced by Ruth Clifford. In the 1980s and 1990s, she was given a voice by Kath Soucie, Tony Anselmo, Diane Michelle, Russi Taylor and Tress MacNeille. Ms. MacNeille is still behind the voice of the lovely Daisy to this day.

When Donald’s best girl first came into the limelight, she wasn’t called Daisy. Her name was Donna Duck in the 1937 featurette titled Don Donald, but later that year, the beautiful damsel duck made her debut as Daisy in Disney’s short, titled Mr. Duck Steps Out.

4. Friendship and girl time are especially important to her.

Daisy is very close friends with Disney’s Clarabelle Cow, who first appeared in Disney’s Steamboat Willie and was created in 1928 by Walt Disney and Ub Iwerks. Daisy and Clarabelle both wear a trademark large bow on their heads, and both seem to really love high heels. Daisy’s other best friend is none other than Minnie Mouse herself. Is it any wonder? Minnie also loves those bows and heels. When she’s not filming a short or direct-to-video special, Daisy loves to shop—often with her two best gal pals.

3. She’s got many productions under her proverbial belt.

Though she mostly plays a supporting character role in Disney’s productions that feature her, Daisy Duck has enjoyed a significant amount of screen time. In addition to several Disney shorts, Daisy is also featured in Quack Pack, which debuted in September of 1996, Mickey Mouse Works, Disney’s House of Mouse and Mickey Mouse Clubhouse. Inn 2017, she was even cast in an episode of Disney’s revamped DuckTales. Daisy also has roles in Disney’s video games, Kingdom Hearts and Kingdom Hearts II.

2. Notable quotables from Daisy Duck are too many to, well, quote!

1. She’s not ready for commitment. Not yet anyway.

Either that, or Donald isn’t. That’s because unlike their best pals Mickey and Minnie Mouse, Donald Duck and Daisy Duck are still in the dating phase of their relationship. He hasn’t put a ring on it yet, but we aren’t completely surprised. Daisy’s got a lot going for her as a single girl! After all, fashionistas can’t be tied down for too long!