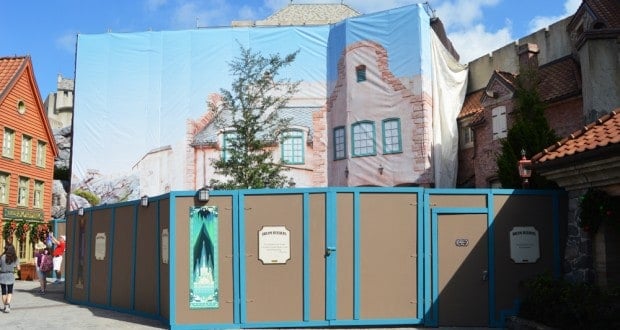 Refurbishments are necessary at Walt Disney World. Since the parks are open 365 days of the year, maintenance work will need to be done to keep them working properly. Rides also need a fresh coat of paint and a thorough cleaning from time to time. Small changes are often added to a ride when it’s closed to keep it fresh and exciting. Sometimes a refurbishment will last only a few days. Other times, major changes will take place and the refurbishment will last much longer. Occasionally the updates take place overnight, and the ride never has to officially close. Here are five refurbishments to look forward to. The annual water park closures and refurbishments are not included.

Downtown Disney has officially become Disney Springs, but that does not mean that the work is even close to being finished. New shops and restaurants are still planned, and one old favorite is about to undergo a major refurbishment. Planet Hollywood’s last day will be January 5, 2016. It will then be transformed into Planet Hollywood Observatory. There is not yet an official date set for reopening, but it is expected to happen sometime between July and September of 2016. The new restaurant will have a new menu, a new theme, and, unfortunately, a new staff. It has already been announced that the restaurant’s current employees will be laid off, but they will be given first priority to reapply if they so choose.

Toy Story Midway Mania! is one of the most popular rides at Disney’s Hollywood Studios. It is fun for the entire family. You’ll play carnival style games, with the help of characters from the Toy Story movies. Your 3D glasses add to the experience. Guests flock to the ride when the park first opens, and it doesn’t take long for the lines to grow. Disney is working on a solution to that problem, they are adding another track to the ride. That will up the ride’s capacity, and keep the lines under control. The new track is already under construction and is expected to be operational by late 2016. It has not yet been announced whether or not the ride will actually close to get things up and running.

Another extremely popular family ride is also getting an overhaul. Soarin’ opened in 2005 as part of the Happiest Celebration on Earth. Guests hang glide over the state of California. You’ll fly with hot air balloons, head over a golf course, and get close to kayaks while taking in some of California’s most beautiful scenery. The ride ends over Disneyland Park at Christmastime. Soarin’ is incredible, but it feels dated. That is about to change. Soarin’ is set to close on January 4, 2016. The ride will reopen sometime in the summer with a new film that will feature natural and man made wonders from around the world. A third theater will be added at the same time to increase the ride’s capacity. While it will be hard to not have Soarin’ for several months, the new experience should be worth the wait.

In October, 2014, Maelstrom closed at the Norway Pavilion. The Viking ship ride through “the spirit of Norway” is being replaced by something much more commercial. The new ride will be Frozen Ever After, and it will take guests into Arendelle from Frozen. Riders will climb into the same boats that were used for Maelstrom, and sail into a musical adventure. Plenty of characters from the popular movie Frozen will be seen to join in the fun. Frozen Ever After is expected to open in the spring of 2016, and it will be an instant hit. Also expected at the Norway Pavilion is a new meet and greet area featuring Anna and Elsa. Expect long lines at the pavilion and a hard to obtain FastPass+.

In many ways you can say that all of Disney’s Hollywood Studios is under refurbishment. In early 2015 the park’s icon was removed, rides and attractions have closed with little warning, and plans have been announced for a Star Wars Land and a Toy Story Land. Even the name of the park is going to change sometime in the future, the new name has not yet been announced. Work on the new lands is set to begin early in 2016, and no further timetable has been given. There are plenty of rumors floating around about what might have to be done to remake the park. Streets of America is expected to close, there are rumors of a parking garage, and even the front gate could be moved. There will also be more closures. While it is sad to say goodbye to old favorites, the new lands promise to be amazing.

2015-11-30
PaulaK
Previous: Is Club 33 in Disneyland Resort about to open to the public?
Next: 8 Things No One Tells You About Visiting Disney’s Animal Kingdom