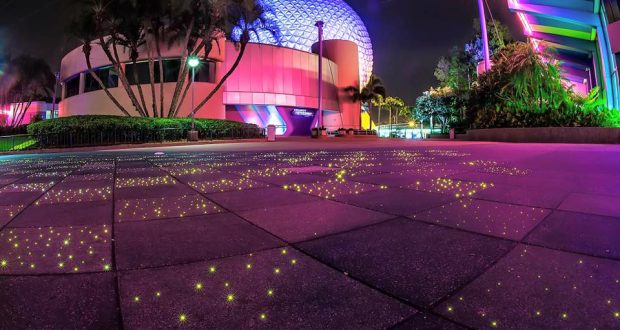 Walt Disney World’s Epcot is one of our favorite Disney parks.  There’s no other park where you can travel the world AND travel to the future, all from the comfort of Orlando!  We think Epcot is Disney’s most under-rated park, and it deserves to be at the top of your Disney vacation list!  There’s plenty here to keep kids and adults of all ages and interests enthralled.  So, if you’ve never been to Disney’s Epcot, or if you’re interested in rediscovering it, here is the low-down on WDW’s Epcot.

Two Parks in One

With Epcot, guests get not one, but two parks.  The acronym “Epcot” stands for “Experimental Prototype Community of Tomorrow”, for the futuristic working community Walt Disney envisioned, which sadly never materialized.  Years later, Imagineers were torn between a futuristic Disney theme park, and a World’s Fair theme park.  They decided to use both, combining them into one theme park – and voila!  The Epcot we know today was born.

Because certain attractions are very popular with guests, Disney limits the number of FastPasses+ you can get for these rides in a given day, using a tier system – you can only choose one Tier 1 FastPass+ per day, and chose Tier 2 rides for the rest of your FastPasses+.  In Epcot, Tier 1 attractions are Frozen Ever After, Soarin’, Test Track and IllumiNations: Reflections of Earth.  Tier 2 rides are Disney & Pixar Short Film Festival, Journey Into Imagination with Figment, Living with the Land, Meet Disney Pals at the Epcot Character Spot, Mission: SPACE, Spaceship Earth, The Seas with Nemo & Friends and Turtle Talk with Crush.  Our recommendation?  Get your Tier 1 FastPass+ for Frozen Ever After; then, arrive first thing in the morning to do Test Track before the lines get bad, and wait in line for Soarin’, which has increased capacity and lower wait times since its renovation.  For your Tier 2 FastPasses+, Spaceship Earth, The Seas with Nemo & Friends, and Mission: SPACE are all great options!

The sky’s the limit when it comes to food in Walt Disney World’s Epcot!  Whether you’re looking for a variety of tasty global cuisine, or a yummy caramel treat, or a meal among majestic sea creatures, there’s something here for you.  A great option for a quick service meal in Future World is the massive food court Sunshine Seasons, where you can select a meal that’s grown right on Epcot property (take a leisurely boat ride through Disney’s greenhouses on Living With the Land to learn more!).  For table service, a unique option is Coral Reef, where your dinner entertainment consists of the more than 4000 sea creatures in the enormous Nemo and Friends aquarium – and you’ll have a panoramic view!  The World Showcase has its own delights; we recommend sampling the tantalizing caramel menu at Karamell-Kuche in Germany, or the hand-made ice cream at France’s L’Artisan des Glaces.  The School Bread at Kringla Bakeri og Cafe in Norway is a guest favorite (though personally not ours).  And for a table service meal, we love the gorgeous atmosphere (all the tiles were hand-made by actual Moroccan artisans!), delicious food, and authentic entertainment at Restaurant Marrakesh.  But go ahead, experiment – you’ll find your own favorite foods at Disney’s Epcot!

So, hopefully by now you’re hooked!  If you want to do Walt Disney World’s Epcot right, here are a few insider tips that will make your day that much better.  First, make sure you arrive at the World Showcase right when it opens (typically 11:00 am), to beat the crowds; you can always return to Future World later in the afternoon to complete any attractions you haven’t done.  Next, avoid the temptation to fill up at any one venue in Epcot – instead, snack around the worlds, and grab a quick bite at a variety of pavilions to try as much of the fantastic international cuisine as you can!  If you’re looking for an attraction with short lines, know that you’ll rarely wait longer than 10-15 minutes for Turtle Talk with Crush, and if you’re short on time but want to ride Mission: SPACE, opt for the “Green” version (the gentler option with no spinning), as it has shorter lines than the “Orange” version.  And to beat the crowds leaving the park at the end of IllumiNations, opt for a lovely post-fireworks stroll around the lagoon, where the shops will still be open – once you’re finished, the transportation lines will be much shorter, and your stress levels will be lower!