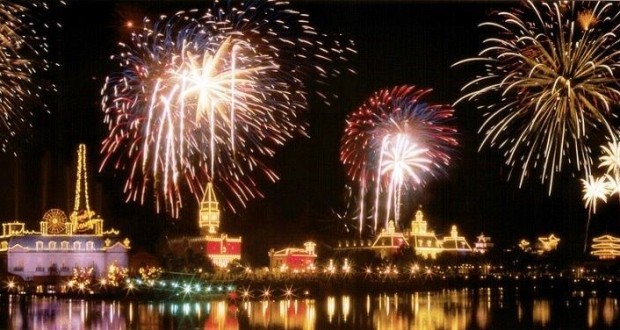 One of the best ways to end a day at Walt Disney World is with fireworks. Happily Ever After takes place at the Magic Kingdom, and it is arguably one of the best fireworks displays on the planet. While IllumiNations at Epcot is not all fireworks, they are certainly an important element of the show. Star Wars Galactic Spectacular at Hollywood Studios is winning over fans whether you are or are not a Star Wars fan. Plus, there are also some fireworks in Fantasmic! which is also located at Hollywood Studios. You are going to want to get the most out of the fireworks, and so are thousands of other guests. Here are eight tips to help make your firework viewing a little more sane.

8) Be Patient When Leaving

When the fireworks are over, a mass crowd will leave the park. It can get crazy, so please be patient. Give yourself some extra time at the end of the night. Don’t assume that you’ll be back at your hotel at 9:30 if Happily Ever After started at 9:00. Pushing, cutting through the crowd, and other bad behaviors are not going to get you out of the park any faster. Plan some extra time.

Walt Disney World fireworks are loud. They can be heard miles away. If your kids aren’t used to loud noises, warn them ahead of time. You might want to pack a few pairs of earplugs, just in case.

6) Be Prepared to Wait

Some spots for viewing fireworks are better than others. If you plan to watch from a preferred area, claim your spot early and be ready to wait. If the prime spots are filling up around you, don’t send your family to ride something while you try to hold a large area. That isn’t fair to other guests.

The time for IllumiNations doesn’t change too often. Most evenings it takes place at 9:00pm, and during the holidays it’s 9:30. (There are a few random days when it strays from that schedule, but those are all big holidays.) You don’t want to miss out on a good viewing spot because you had the wrong time. There are also a few days when the Magic Kingdom doesn’t have fireworks due to special fireworks such as for Mickey’s Not-So-Scary Halloween Party or Mickey’s Very Merry Christmas Party. Pick up a Times Guide when you enter the park, just to be sure.

One of the best ways to take the stress out of the fireworks is to watch them from outside the park. There are some great IllumiNations viewing areas on the bridges along Crescent Lake in the Epcot Resort Area. Just leave through International Gateway. If it’s Happily Ever After that you want to see, head to any of the Magic Kingdom resorts. You can also catch the fireworks from the Transportation & Ticket Center, which will get you back to your car much sooner. When you leave a park to watch the fireworks, you won’t get caught in the end of the night crowd.

What is sweeter than Walt Disney World fireworks? How about the same fireworks with an all you can eat dessert buffet? Dessert parties are becoming quite popular at Walt Disney World. The two choices currently for Happily Ever After – Garden Viewing and Tomorrowland Terrace viewing. IllumiNations now has Frozen Ever After Sparkling Dessert Party which includes Frozen themed desserts and a ride on the popular Frozen Ever After. Star Wars Galactic Spectacular has a great dessert party as well, where you dine in the Star Wars Launch Bay and then move to a view area for fireworks. Plus, don’t forget to check out the Fantasmic! Dessert & VIP Viewing Experience. All of these parties come with delicious desserts, beverages (no alcohol in the Magic Kingdom parties), and prime fireworks viewing. Reservations are highly recommended.

Cast Members have all kinds of inside information, and they are usually more than happy to share. Ask one where he or she would recommend viewing the fireworks. Also ask when the best time to claim a spot will be. The answer might surprise you, and you could end up in a less crowded area.

For a view of Happily Ever After that you will never forget, make a reservation at California Grill restaurant. It’s located in Disney’s Contemporary Resort. You’ll dine on delicious California style cuisine, and enjoy the extensive wine list. When it’s time for the fireworks, you’ll head out onto one of two decks to see the show. California Grill is fifteen stories up, which will give you a different perspective of the nightly show. The soundtrack is piped in, so you can enjoy the music and the story behind the fireworks as well. You don’t have to make your reservation for the exact time of the fireworks. If you dined earlier, just bring your receipt to check in and you will be allowed back into the restaurant.

2015-04-02
PaulaK
Previous: Cinderella’s Castle To Be Renamed For Elsa
Next: 9 Things Disney Fans Never Get Tired Of Hearing