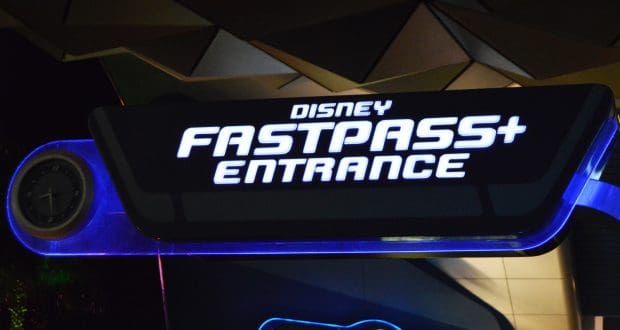 FastPass+ is a system that allows you to skip the standby line, which will get you onto a ride faster. Unlike some other theme parks across the country, the system is free to use at Walt Disney World. Here are eight facts, secrets, and suggestions to help you get the most out of FastPass+.

The other way that you will want to make your reservations early is to make them as early in the day as possible. Make the first one for about an hour after rope drop (see #5 below), and then the other two as close to that as possible. After you’ve used all three in the park, you can make a fourth reservation. That is one less standby line that you’ll have to wait in. After you ride, make another reservation. You can keep making reservations one at a time all day, as long as you keep using them. The selection will eventually grow thin, but you’ll have saved a lot of time.

As stated above, the moment you can make FastPass+ reservations, do it. That said, if there is something that you wanted a reservation for but didn’t get it, keep checking back. Just like dining reservations, sometimes someone will give up a spot and you could be the one to grab it. Just go onto your My Disney Experience account and hit “Modify” for one of your choices. You can check to see if what you wanted is available. If it’s not, you’ll still have your original reservation.

The My Disney Experience App can be a great help when keeping track of your FastPass+ choices while you’re in a park. You can use it to change a time if you realize that you’re running late. Add your fourth FastPass+ through the app once you’ve used the first three, then a 5th and so on until the park closes. One word of warning about the My Disney Experience App, it does tend to be a battery drainer, so you might want to close it when you’re not using it. If you don’t have the app and want to change a FastPass+ reservation or make a fourth one, there are kiosks in each park. Ask a Cast Member where the closest one is.

5. At Rope Drop, Ride Something Else First

Chances are that you’ve heard how important it is to arrive at rope drop. If you take that advice, don’t immediately head to your first FastPass+ attraction. Instead, get in line for the most popular ride that you don’t have a FastPass+ for. The line will be the shortest that you’ll find it all day. Ride that, then get in line for another popular attraction. There’s a good chance that you’ll be able to ride two or three things before your first FastPass+ return time.

The Walt Disney World shows are all unique, fun, and amazing. That said, they are also usually fairly easy to get a seat for. You might want to use your three FastPass+ reservations on other things. That said, if you have an all-things-Frozen kid who thinks that For the First Time in Forever: A Frozen Sing-Along Celebration is the main reason that your family is taking the trip, go ahead and make that reservation. Shows are often a good choice for your fourth FastPass+ selection. That’s not saying that there won’t be lines for shows, but most of the theaters are fairly high capacity, and if you arrive early you should be able to get a good seat.

If you have dining reservations, make sure that you know the times when you make your FastPass+ reservations. The system won’t tell you if they overlap. You also don’t want to ride Tower of Terror ten minutes after you’ve enjoyed an all-you-can-eat buffet at Hollywood & Vine. Enough said.

2. Be Kind to the Cast Members

You have a one hour window for your FastPass+ reservations. Some Cast Members at the ride’s entrance will let you in five minutes early or a few minutes late, but others will stick to the rules. Arrive in the right time frame and it won’t be a problem. If you’re a little early or late, be nice to the Cast Member when you ask if you can still ride. Being rude will not get you on. If he or she says no, just accept it. It’s not the Cast Member’s fault that you weren’t there at the correct time. As a rule of thumb, you should always be nice to Cast Members anyway, not just when you want a favor.

Epcot, Hollywood Studios, and Animal Kingdom have tiers for FastPass+. You will make one selection from Tier One and two from Tier Two. That means that you’ll have to select from the most popular attractions which fall under Tier One. For example, Tier One at Animal Kingdom is Avatar Flight of Passage and Na’vi River Journey. You can only pick one. For the other you’ll want to arrive at park opening and get in line right away. Pick one, and get in line for the other right after rope drop.

2016-07-18
PaulaK
Previous: 10 Facts About Pirates Of The Caribbean In The Magic Kingdom
Next: Breaking: Test Height Balloons Sighted Over Epcot