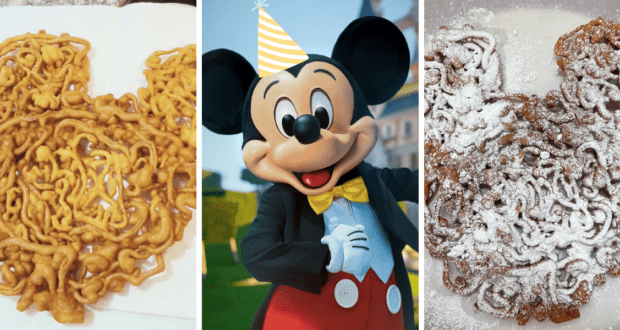 Today we’re celebrating Mickey’s Birthday with an easy funnel cake recipe. This is homemade funnel cake is one recipe that we’d argue is better than at a theme park. No waiting in line. No walking around Walt Disney World with powdered sugar-stained clothes and sticky hands.

Best of all, it costs less than two dollars to make this recipe which beats the nearly ten-dollar price tag on the ones found in Disney theme parks.

Check out our video clip and recipe below:

Where to Find Funnel Cakes in the Parks

If you’d rather celebrate Mickey’s Birthday in person, there are several spots in the Disney theme parks where you can find this sugary treat. Walt Disney World Resort has funnel cakes in EPCOT, Animal Kingdom, and several locations throughout Disney World. Sleepy Hollow in Liberty Square at Magic Kingdom Park has one of the best-rated funnel cakes loaded down with whipped cream and sugar.

Great things stand the test of time, and funnel cake and Mickey Mouse are at the top of the lists of greats.