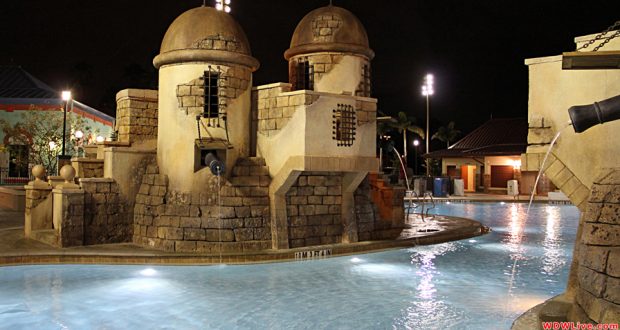 Do You Know These 6 Secrets About Disney’s Caribbean Beach Resort?

Over 200 acres, spread across five distinctly themed “villages,” makeup Disney’s Caribbean Beach Resort. The villages represent islands in the Caribbean Sea: Aruba, Martinique, Barbados, Jamaica, and Trinidad (which has a north and south village). At the center of of these villages sits Barefoot Bay, and each village has little beaches around the lake. Caribbean Beach is a huge resort– so large that it has an internal bus system that makes many stops at various points around the resort to pickup and drop off guests. Looking for more secrets about Disney’s Caribbean Beach? Read on below!

While you can find the Royal Rooms in Port Orleans Riverside, you can book a Pirate themed room in Caribbean Beach. The themed rooms are in the Trinidad South section of the resort. The theming includes pirate ship beds, and a map on the floor. A Pirate Room is an ideal choice for a family of pirate lovers. But, the Pirate Rooms are the farthest from the pool, Customs House, and food options. So if walking around the resort for these things will bother you, maybe a Pirate Room isn’t your best choice.

The non-pirate rooms received a major overhaul in 2015. Furniture, fixtures, and bedding are all new, giving the rooms a completely refreshed feeling. What’s more, Caribbean Beach also got new, bigger beds. So now the rooms have Queen beds instead of the old double beds. And like the refurbishments at the Polynesian Village and elsewhere, the splashy colors in the Caribbean Beach rooms have been replaced with a more refined, understated look that maintains an island feel.

Fuentes del Morro is the main pool at Caribbean Beach, located in the Old Port Royale area of the resort. It’s the only zero-entry pool at a Moderate Resort. Zero-entry pools are popular for families at the Deluxe resorts because they allow the smallest kiddos to splash in the shallow water. It’s great that families have a Moderate price point for that amenity. Fuentes del Morro is a pirate themed pool that’s almost like stepping into the fortress scene in Pirates of the Caribbean. There’s cannons, look out points, and even iron bars on the windows. Plus Fuentes del Morro has two waterslides, a kid-friendly one, and a 102 foot slide for the daring. Toddlers will also love the kiddie water play zone.

As if you couldn’t get enough Pirate-y goodness already, kids can enjoy a Pirate Adventure Cruise. The hotel hosts a Caribbean-specific Pirate Adventure. It sails out of Barefoot Bay Bike Works on select nights. Kids aged 4-12 can set sail on a 2 hour adventure to find pirate treasure. Parents aren’t allowed on this voyage, so it’s a great time for a date night for them. The Pirate Adventure Cruise would be a great activity for a “down day” from the parks!

If you pull up a Google Earth map of Walt Disney World, and zoom in to Disney’s Caribbean Beach (go ahead, I’ll wait here while you do) you’ll notice that really the only thing separating the hotel from the backside of Epcot is Buena Vista Dr. That means areas of the hotel (especially the Aruba Village) are actually very close to to pavilions like Italy and Germany, and also where the firework barges are kept. The plus side to this is it’s possible to watch the fireworks from the beaches along the resort (although you won’t be able to see the globe or fire). The downside to being so close is the firework noise which might scare the kiddos or keep them up past their bedtime. If noise is a concern for your family, request a room farther from Buena Vista Dr to give you more buffer space.

2016-10-26
Robin Swanson
Previous: 7 Things You Should Definitely Do When You Arrive at Disney’s Hollywood Studios
Next: The 4 Magic Kingdom Resorts Never Built