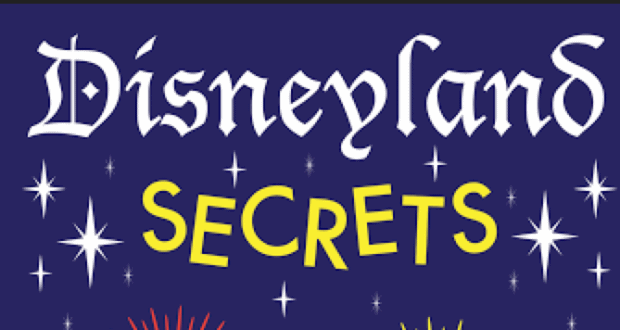 Walt Disney’s original Magic Kingdom, Disneyland in California, turns 60 years old this year. This original park holds hundreds of secrets and stories just waiting to be unlocked. In the new book by Gavin Doyle, Disneyland Secrets: A Grand Tour of Disneyland’s Hidden Details, you can dive head first into over 150 stories of the secrets and details of this original park.

Below we share twelve secrets from the new book.

#12 Many backstage buildings around the resort are painted “no-see-um-green”.

Varying hues of green are used based on the surrounding paint. The goal of this “no-see-um-green” is to cause the object to fade into your color spectrum so that your eye will miss it completely. The best example can be found on the outdoor lift hill of Big Thunder Mountain, where you can easily see backstage by turn- ing your head to the right. Most guests simply don’t see this backstage area as everything is covered in Disney’s spe- cial green-colored paint. Other examples include the door into the private Club 33, the show building for Indiana Jones, and the buildings lining the railroad tracks.

#11 The landmarks throughout the parks are called “weenies” as they draw people toward different areas.

According to Disney historian Jim Korkis, Walt Disney would often return home from long days of work at the Studio and in Disneyland and walk into the kitchen. He would grab two hot dogs or “wieners”. Using these he found that he could make the family dog, Lady, perform all sorts of tricks and lead her about. Perhaps he referenced this practice to an Imagineer working on Disneyland and the name stuck.

#10 All Cast Members, from top executives to street sweeper, go through a training program called Traditions before beginning work.

The program focuses on bringing new hires into the fold and teaching them about the culture and heritage of the Walt Disney Company while featur- ing the past, present, and future. The goal of the class is to remind every Cast Member that they each play an import- ant role in providing quality and magic to the guests who visit the park. At the conclusion of the ceremony, Mickey Mouse presents each new hire with their official Disneyland name tag.

In 1954, just one year before Disneyland had opened, the Fujishige family pur- chased 56 acres of strawberry fields across from Disneyland park for $10,000. For years Disney pursued the property. When the Fujishige’s finally sold in 1998, 52.5 of the acres sold for $99.9 million dollars. The family still owns 3.5 acres.

#8 The ground when you first enter the park is red brick. Walt Disney wanted it to feel like you were walking in on a red carpet.

Each part of Disneyland was con- structed with great thought for the guest experience. In addition to the red brick/red carpet device, the tun- nels entering the park are meant to represent the curtains opening on the stage. Once you step through them, you have entered a new world.

#7 Under the Candy Palace & Candy Kitchen window on Main Street there’s a small vent. This vent shoots the fan- tastic candy smells into the streets.

The Smellitzer was named after the famous WWI shell launcher, the how- itzer. Instead of launching deadly shells, it launches glorious aromas.

#6 The Partners statue, unveiled in the cen- tral hub in 1993, and which portrays Walt Disney holding hands with Mickey Mouse looking out toward the future, has several easily missed references to Walt.

On Walt’s tie there is a small insignia for the Smoke Tree Ranch in Palm Springs, CA. Disney had a house there and had the logo stitched into many of his ties. On Walt’s right hand there’s a Claddagh ring in honor of his Irish heritage. Both Walt and his wife, Lillian, purchased Claddagh rings during their 1948 trip to Ireland and wore them often.

#5 Nothing is better than the sounds of Main Street, U.S.A. when the parks open.

One of the most notable sounds is the clopping of the hooves of the horses. The horseshoes have a special poly- urethane coating to give them better traction and to increase the clip-clop sound as they walk the streets.

#4 When Fantasyland initially opened, the star characters from the films Peter Pan, Snow White, and The Adventure’s of Ichabod and Mr. Toad made no appear- ance in their respective attractions.

The thought was that guests would play the part of the hero in a first-per- son experience. Almost no one understood this concept, and the characters were eventually added.

#3 The queue of Buzz Lightyear Astro Blasters is lined with big battery boxes.

Many of these props are labeled Glendale, California, USA. The batteries pay tribute to the home of Walt Disney Imagineering, the creative team of people behind everything in the Disney parks.

#2 Originally, the Tiki Room was designed as a restaurant. Only later was it turned into a show.

The Tiki Room is one of two attrac- tions in Disneyland that has a dedicated restroom. Not only is it a cool secret, but also a great thing to know when there is a long line at the main Adventureland restroom just across the path.

#1 When the Jungle Cruise originally opened, live alligators were kept in pens near the queue to entertain guests.

The problem was that many guests believed these animals were fake, just like the animals on the ride, and threw pop- corn at the animals to test their theory. Occasionally, the gators would get out of their cages and escape into the Jungle Cruise lagoon. Trainers would have to be called from the nearby Buena Park Gator Farm to retrieve the animals.

These secrets just scratch the surface of what is inside of the new Disneyland Secrets: A Grand Tour of Disneyland’s Hidden Details by Gavin Doyle. This book is a must for any Disney fan visiting Disneyland or Walt Disney World, as it gives back stories and secrets that will improve every trip to the Disney Parks.