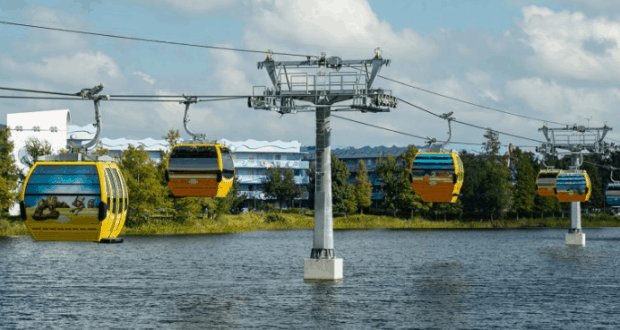 The Disney Skyliner is the newest form of transportation at Walt Disney World. It uses gondolas to take guests from some of the resorts to either Epcot or Disney’s Hollywood Studios. The Disney Skyliner opens to the public on September 29. On September 27, I attended a media event that included the dedication, plus a chance to ride.

If you would like to watch the dedication ceremony, we carried it live on the Disney Dining Facebook page (Click here to view!). We also had a chance to see the new Skyliner merchandise for sale, and we learned a little bit more about the system. I have been following the Skyliner progress since it was first announced and they started clearing land. I still learned quite a bit. We also were able to sample Joffrey’s Toffee Flight Latte. You can order it from the Joffrey’s kiosk at Disney’s Caribbean Beach Resort. It comes in either hot or iced. It was a hot day, so I opted for iced. If you like sweet coffee drinks, you will definitely enjoy this one.

The dedication was held at Disney’s Caribbean Beach Resort, because that is the main hub for the Skyliner. There are three different lines, and you can get on any of the three from the resort. (The Joffrey’s kiosk is right outside of the station, so you can grab your Toffee Flight Latte and a donut before you board.) There are signs that clearly mark which way to go for each line of the Disney Skyliner. If you’re still confused, just ask a Cast Member. Since this is brand new there should be plenty of people around to make sure that everyone heads in the right direction.

The Disney Skyliner runs continuously, kind of like Spaceship Earth or Haunted Mansion. On those rides, everything stops when someone needs to transfer from a wheelchair or scooter. With the Disney Skyliner, you won’t end up stopped on a line because someone is boarding. This was one of my favorite parts of the new system. At the stops there is at least one gondola that is off of the main track. This is for wheelchairs, scooters, and kids in strollers. You can take all the time that you need to load, and when everyone is ready the operator will get the gondola in a spot. There is no waiting or stopping for anyone else.

As you might have guessed from what I just said, strollers, wheelchairs, and scooters are all allowed on the Disney Skyliner. Kids can ride in their strollers, you do not need to fold them up. You are asked to make sure that the wheels are locked. This is for everyone’s safety.

There has been a lot of talk about the fact that there is no air conditioning in the gondolas. People who haven’t ridden have assumed that they will be sweat boxes. This simply is not the case. Our last ride was at noon, the sun was blaring down on us. It was also 90 degrees out, I checked. The temperature in the gondola was not uncomfortable. There was a nice cross breeze. I did not find the gondolas to be stuffy at all. The ride was also smooth.

My other favorite part of the Disney Skyliner is the view. If you look carefully you will be able to see all four theme parks, plus Disney’s Blizzard Beach. You can see into some of the backstage areas, including where they are building Remy’s Ratatouille Adventure. There was a real thrill going over Hourglass Lake on the line from Disney’s Art of Animation and Pop Century Resorts. It’s a fun experience that is perfect for the whole family.

Some of the gondolas on the Disney Skyliner are a solid color, and some of them are wrapped with Disney characters. While the automatic thought is that it is more fun to ride in one with characters, don’t complain if you end up in a solid colored gondola. The wrap impairs the view a bit. You can still see, but I preferred to ride in a gondola without the wrap. Then again, I never rode in one of the Star Wars themed gondolas. That would be a different story for me.

Each gondola seats up to ten people. I was a bit weary of that fact when I first heard it, I didn’t think that it would be possible to have ten people in one. Even though we never had ten on one of our rides, we did have six people and there was plenty of extra room. I now believe that ten people can comfortably ride in one. There is no standing in the gondolas, and because of the type of ride they will not be cramming extra people into a gondola. They will stay with the ten person limit.

As already mentioned, the Disney Skyliner’s main hub is at Disney’s Caribbean Beach Resort. Disney’s Art of Animation and Pop Century Resorts share a station. That line will take you to Caribbean Beach, and from there you will transfer to either Epcot or Disney’s Hollywood Studios. The line to Epcot also stops at Disney’s Riviera Resort, which is expected to open in December.

The Disney Skyliner does not officially stop at Disney’s Boardwalk, Beach, or Yacht Clubs. That said, the Epcot station is at the International Gateway entrance to the park. That makes it easy for people staying at those resorts, as well as those at the Swan and Dolphin, to hop on. The Disney Skyliner is going to make resort hopping a whole lot easier. Staying at the Boardwalk, but have a craving for Tie-Dye Cheesecake? Spent the day relaxing by Stormalong Bay, but want to enjoy the fireworks from Topolino’s Terrace? The Disney Skyliner makes all this and more possible, without having to try to figure out the bus routes.

My main piece of advice if riding the Disney Skyliner is to watch your step when you are getting in and out. As I already mentioned, they move continuously. It is slightly jarring when you take that first step. Even though they are constantly moving, you do not have to worry that someone in your party will be left behind. A Cast Member can slow down the process if need be, so that everyone will have time to board.

Transportation is an important part of a Walt Disney World vacation, and the Disney Skyliner has taken transportation to a new height, literally. The best part of all is that it is a lot of fun! I would like to thank Disney for inviting me to the media event and dedication. I can’t wait to ride again.