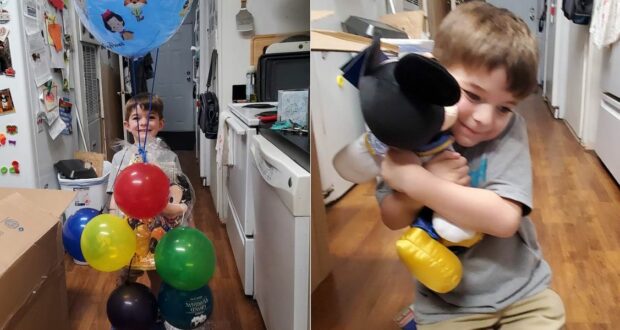 If you’ve been following along with Jack’s viral balloon, we have some excellent news that will have you reaching for the tissues. Disney has provided the sweet 4-year-old with an extra special dose of Disney magic!

We previously shared the story of Jack and his family, who decided to visit Disney’s Grand Floridian Resort and Spa on Tuesday, November 22, 2022.

While Jack, a four-year-old boy, and his family were checking out the massive gingerbread house in the middle of the Deluxe Resort lobby, Jack’s Mickey and Minnie balloon detached from its string and floated to the top of the towering lobby ceiling.

The devasted child thankfully has a fast-thinking mom, Laurie, who decided to turn it into a positive experience for Jack.

Laurie remembers, “I told him that his Mickey balloon wanted to escape and become a new “hidden” Mickey for other people to find.” That eased Jack’s disappointment as he looked up at his runaway balloon.

RELATED: YouTubers Buy EVERY Balloon at Magic Kingdom & Give Them Away!

Jack’s mom, Laurie, then decided to put a photo of #JacksMickeyBalloon on social media, asking Disney fans to share if they saw the balloon and, if so, send a picture of it along with where they were visiting Disney from, for a scrapbook she was putting together for Jack of his new “Hidden Mickey.”

We shared the story at the height of the Disney fandom sharing photos and sweet messages of the balloon for Jack. But, as expected, at the end of the November, reports were being shared that Jack’s balloon was slowly coming down from the Grand Floridian ceiling.

Laurie shared, “I’m hoping that once Mickey comes down that we can receive the original balloon so I can frame it for him. We also plan on printing all the Facebook pictures and posts along with the comments and making him a memory book of #jacksmickeyballoon!”

RELATED: Don’t Pop It! The Trick to Flying Home WITH a Disney Balloon

Sure enough, Disney sent the balloon home to be returned to Jack!

PLUS, more pixie dust arrived in the mail as Disney showered the child with extra gifts like a Mickey Mouse plush, suckers, and a pop-up book.

Way to go, Disney, for going the extra mile to create pure magic! This will surely be a magical moment Jack, Laurie, and the rest of the family will never forget.