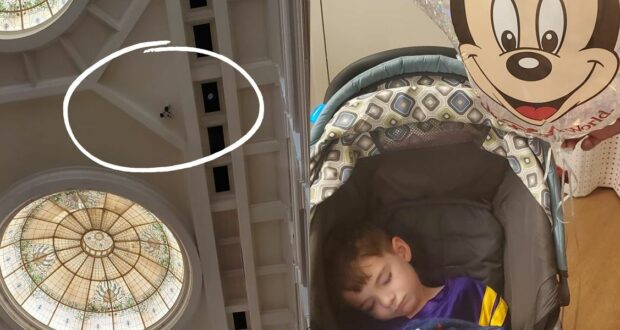 You’ve dreamed, planned, and saved for the Walt Disney World Resort vacation of a lifetime. Whether you’re eagerly awaiting to share the experience with family and friends, excited to see your children beam with excitement, or are treating yourself to a solo trip… a Disney vacation is a magical getaway!

While we like to dream that every moment of a Disney trip is a perfect one, the truth is hiccups happen… and sweet, four-year-old Jack recently discovered this on his own.

But, what could have been a sad childhood memory has been turned into an incredible story supporting Jack and bringing together the Disney fandom in the greatest way.

Jack and his family arrived at Walt Disney World Resort on Monday, November 21, 2022, and set off to explore Disney Springs, where the family purchased a Mickey and Minnie Mouse balloon for Jack.

Not only is a balloon a perfect Disney gift for a child, but it is also useful. Jack’s mother, Laurie, notes, “We remember how these balloons helped us find our stroller in the sea of stroller parking, so we wanted to get the balloon early in on our trip.”

The next day, Tuesday, November 22, 2022, the family decided to ride the Resort Monorail to one of Disney’s most popular Resort Hotels, Disney’s Grand Floridian Resort and Spa.

The Resort is an especially popular location this time of year as Guests arrive to see the stunning Christmas tree, holiday decorations, and Gingerbread house.

Jack’s family took pictures of the beautiful Resort lobby, all decked out for the holidays. As the family turned the corner to grab some delicious treats from the Gingerbread shop, Jack’s Mickey balloon escaped from its string.

Laurie recalls, “There was nothing I could do but stand there and watch Mickey float away, all the way to the top of the Grand Floridian!”

This moment is practically every child’s worst nightmare! We can likely all recall a moment of losing a balloon with that utterly helpless feeling as it floats away.

RELATED: Don’t Pop It! The Trick to Flying Home WITH a Disney Balloon

Laurie goes on to share, “The minute Jack noticed the string hanging from his stroller, he put two and two together and realized it was his Mickey balloon floating away. His little heart shattered, and he and I both stood there and shed some tears.”

But, what could have been a difficult moment for Jack was instead rescued by his brilliant mother!

When the balloon finally rested at the top of the Grand Floridian lobby and was looking down at Jack, Laurie notes, “I told him that his Mickey balloon wanted to escape and become a new “hidden” Mickey for other people to find!”

Laurie put Jack’s balloon story out on social media within Disney fan groups. She asked if anyone sees it to please use #JacksMickeyBalloon and let them know where they are visiting Disney from. She would be compiling a memory book for Jack.

Now, a full week later, #JacksMickeyBalloon is trending on social media! Disney fans are sharing images throughout Laurie’s post for Jack to see his balloon still surviving as a hidden Mickey.

Jack’s mom, Laurie, adds, “I never realized his balloon would become so famous and that people would want to go to the Grand Floridian to find #jacksmickeyballoon. The Facebook comments and posts of his balloon pictures have really become a highlight of our trip! His little face lights up every time I read him a new message!”

As of November 28, 2022, the balloon remains up on the lobby ceiling. Laurie has shared, “I’m hoping that once Mickey comes down that we can receive the original balloon so I can frame it for him. We also plan on printing all the Facebook pictures and posts along with the comments and making him a memory book of #jacksmickeyballoon!”

RELATED: YouTubers Buy EVERY Balloon at Magic Kingdom & Give Them Away!

And, no worries, Disney was exceptional about Jack losing his balloon. The family took the balloon string and weight to another balloon location, where Cast Members were happy to replace the balloon.

We’re pretty sure Winnie-the-Pooh (A.A. Milne) said it best, “Nobody can be uncheered with a balloon.” Thank you to Jack and his mom, Laurie, for sharing their sweet story and spreading cheer with a single Mickey balloon.

2022-11-28
Jamie Sylvester
Previous: Is Disney’s Park Reservation System Going Away? Bob Iger Isn’t Sure
Next: Disney to Stay Out of Politics but Not Reversing Course on “Woke” Policies According to Iger