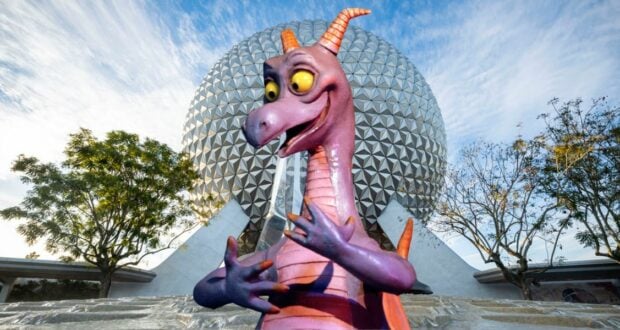 Walt Disney World Resort is rolling out all things FIGMENT! The iconic purple dragon from EPCOT is once again in the spotlight as Disney reveals he will be getting a piece of his own nighttime show in the Disney Park as he takes over EPCOT’s iconic Spaceship Earth.

Figment, the extremely popular purple dragon from the EPCOT attraction Journey Into Imagination With Figment, is the center of attention as Disney launches its 2023 EPCOT International Festival of the Arts. The EPCOT Festival officially began on January 13, 2023, and will run through February 20, 2023.

RELATED: Orlando Airport Celebrates the Return of Figment to EPCOT

The EPCOT International Festival of the Arts features plenty of Figment with exciting new merchandise, the return of the notoriously popular Figment Popcorn Bucket, the debut of a new food booth called “Figment’s Inspiration Station at the Odyssey: Art, Food, and Little Sparks of Magic,” as well as Figment Waffles being sold at the Park!

Additionally, Disney has previously revealed that soon Figment will be available for a meet and greet, plus, get this… a Figment movie is in the works.

@BrookeGMcDonald took to social media to share, “On Jan. 13, a new Beacon of Magic celebrating Figment will debut on Spaceship Earth for the 2023 EPCOT International Festival of the Arts. “This technicolor tribute features music that is bound to spark your imagination, along with a spectacle of dazzling light.” #disneyworld”

Additionally, it is confirmed that Figment’s Beacon of Magic segment will include “Rainbow Connection” during the nightly show.

Be sure to visit EPCOT during the International Festival of the Arts (January 13 – February 20, 2023) to see Figment take over Spaceship Earth in this new segment!