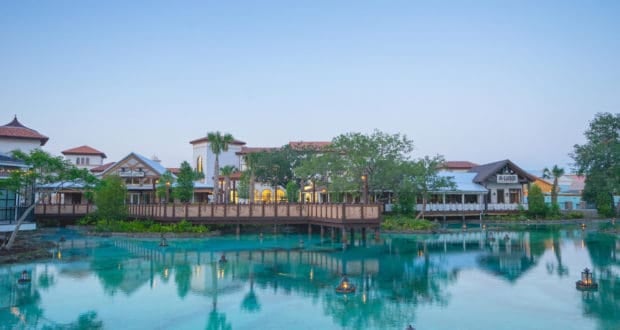 It’s been about two months since Walt Disney World shut down. We still have no idea when the theme parks and hotels will reopen, but today (May 20) guests were able to return to Disney Springs! Currently only third-party places are open, on May 27 World of Disney and two other Disney owned establishments will open once again. Disney is taking things slowly, and this was the first step.

The official opening time was 10:00, and my daughter and I arrived maybe 15 minutes before that. Disney has stated that parking will be allowed only in the Orange and Lime garages. When we arrived, Lime was still closed. The ramp for Orange that is right past Typhoon Lagoon was also closed. Instead, we followed the signs to the first level entrance, which is usually blocked off to the general public. Many people were parking on the first level. We drove up to the second level, because that’s where the entrance to Disney Springs is. (The Lime Garage is the same way.) There were no parking attendants, you could park where you wanted. There were no cones up to keep people apart when parking, but since you could pick where you parked they weren’t really needed.

There were plenty of Purell dispensers throughout the shopping and dining district. There were also a few handwashing stations. It was hard to go too far without seeing a sign with reminders of what to do to stay safe. There were markers on the ground outside of the stores and restaurants to keep groups six feet apart. Some of the markers were a simple line that said “please stand here”. There were also larger markers that said “for your safety please do not stand here”. Those are similar to the ones that I’ve seen pictures of from Shanghai Disneyland, they’ve been using them in the lines for the rides. There were also arrows in some areas to keep people walking in the same direction.

Face coverings are required for anyone three years old or older if they plan to visit Disney Springs. For the most part, people were following this rule. I did see more people trying to get around it than when CityWalk reopened last week. Cast Members were also enforcing the rule, we saw one remind a guest that the face mask needed to be worn correctly. Please do not debate whether or not masks or other face coverings should be required. Disney is closely monitoring what happens at Disney Springs, and that includes the face covering rule. The more people who disobey this rule that Disney has made, the longer it will take to reopen the theme parks.

While Disney Springs was not crowded, that doesn’t mean that there were no lines. The two longest lines that we saw were for The BOATHOUSE and Chicken Guy!. Restaurants can currently run at 50% indoor capacity in the state of Florida, which means limited seating. The lines for both places went past the number of markers on the ground. People still did their best to keep apart.

We didn’t go into any of the stores. We did go into Erin McKenna’s Bakery NYC, they have the best Pineapple Upside Down Cake. The small bakery was allowing only four people inside at a time. We did have to wait outside, but it wasn’t for very long.

Josh D’Amaro, who is the newly appointed Chairman of Disney Parks, Experiences, and Products, was at Disney Springs for the reopening. I also spotted Disney Ambassador Stephen, who is such a nice guy. I ran into some friends who I haven’t seen since before the parks shut down. It can be hard to not give a friend a hug, but the guidelines are in place for a reason.

There is one thing that I would change. At Universal Orlando Resort’s CityWalk, there are social distancing markers even in the restrooms. Some sinks there are blocked off so that people will not stand too close to each other. Disney has not taken this precaution. People are encouraged to wash their hands often, but we still shouldn’t get too close. That was the only problem that I saw when I was at Disney Springs. I know that people should use common sense, but not everyone does.

One thing I noticed is that many places that are not yet open are still getting ready. There are social distancing markers outside of many stores that are closed. These stores also have “entrance only” and “exit only” signs on the doors. Once it is time for them to reopen, they will be ready. We walked down to the Cirque du Soleil building. There have been rumors that “Drawn to Life” will never open, and I wanted to see if there was a hint from Disney. There is still a sign on the construction wall that features the new show. That was encouraging to me. Disney had two months to take down that sign if they did not plan to move ahead with the show.

When we left, there was still plenty of parking in the Orange Garage. There is a divider down the middle so that people walking to or from the cars will enter one way and exit the other. Disney was still having cars pull into the garage on the street level, and there was a line of cars waiting to get in. The crowd level had picked up by the time we left, but it still was not crowded. It was strange to see so many open spaces at Disney Springs. Most people are being careful, and Disney is as well. Disney Springs is open daily from 10:00am until 10:00pm for the foreseeable future. It was nice to be able to visit at least part of Walt Disney World again.