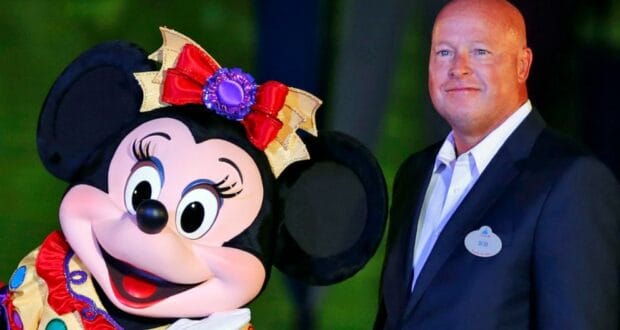 Just about one week ago, The Walt Disney Company’s Board of Directors voted unanimously to extend Disney CEO Bob Chapek’s contract by three years. Chapek’s contract was set to expire this coming February but, with the extension, it will now run through July 1, 2025. The decision to extend Chapek’s contract was a controversial one, as Chapek has struggled to find his footing as CEO since taking over the position from Bob Iger in February 2020. While fans may not have been thrilled with the extension, Disney’s Chairman of the Board, Susan Arnold, released a statement saying that the Disney Board has complete confidence in Chapek and the direction he is taking the Company in.

Now, we are learning some of the details that are a part of Chapek’s new contract — including a $20 million annual bonus. The following was revealed in a recent SEC (Securities and Exchange Commission) filing:

On June 28, 2022, the Board of Directors of The Walt Disney Company (the “Company”) and Robert A. Chapek, the Company’s Chief Executive Officer, agreed to extend the term of Mr. Chapek’s employment agreement with the Company to three years, beginning from July 1, 2022. The employment agreement will be amended to provide that Mr. Chapek will be granted a long-term incentive award having a target value of not less than $20 million annually. The proportion of his long-term incentive award comprised of performance-based restricted stock units will be increased to 60%. These awards do not guarantee Mr. Chapek any minimum amount of compensation. The actual amounts payable to Mr. Chapek in respect of such opportunities will be determined based on the extent to which any performance conditions and/or service conditions applicable to such awards are satisfied and on the value of the Company’s stock. Accordingly, Mr. Chapek may receive compensation in respect of any such award that is greater or less than the stated target value, depending on whether, and to what extent, the applicable performance and other conditions are satisfied, and on the value of the Company’s stock. No agreement has been made to amend any other terms of Mr. Chapek’s existing employment agreement, including his base salary.

It should be noted that this $20 million annual bonus is not IN ADDITION to the $32 million that we reported Chapek made last year. As stated in the SEC filing, Chapek’s base pay is only $2.5 million, with the rest of his income coming from the bonus and stock prices. After his contract was extended, Chapek called working for Disney for more than 30 years “a privilege.” With the launch of Disney’s newest cruise ship, the Disney Wish, Chapek hopes to “reset the narrative” and gain people’s trust in his leadership abilities.