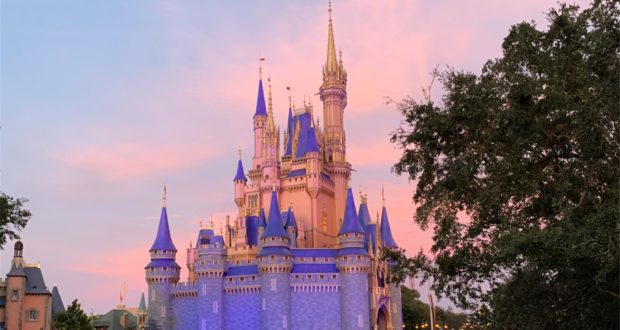 One of the main things that people talk about lately when it comes to Walt Disney World is the crowds. Even though Bob Chapek recently admitted that the crowds are capped at 25% capacity, many believe that the actual figure is higher. The parks are the busiest on weekends, including Fridays. On Friday, October 16, my daughter and I decided to see for ourselves.

We did not arrive at Magic Kingdom when it opened. Instead, we headed that way in the middle of the afternoon. The park closed at 8:00 that evening, and I was excited to once again see Cinderella Castle after dark.

When we arrived, Main Street, U.S.A. was not overly busy. It was busier than back in July, but there were still plenty of open spaces. I checked Wait Times on the My Disney Experience App. They were long, but not Christmas Day long.

One thing that has been fairly common since the parks reopened is that posted Wait Times do not match the actual Wait Times. We made the sacrifice and rode several different rides. Wait Times were honestly pretty accurate. They were a minute or two over or under, but it wasn’t the “posted 60 minutes, actual wait 30 minutes” that I’ve experienced several times in the past couple of months.

The Magic Kingdom was definitely more crowded than I’ve seen it in a while. What was good, though, was that most of the people there were still making an effort to social distance. It was easy enough to maneuver away from others if they got too close.

A large part of the problem right now is the lines. This isn’t because they are long, it is because Disney is trying to keep people outside as long as possible. The lines are now winding around in ways that we never imagined before. Space Mountain is a good example. When we got in line, it wound around past the restrooms, then headed down into the area that used to be for smoking. There were almost as many twists and turns in the line as on the ride! Most of the wait was outdoors. After we finally entered the building, it was only another ten minutes or so until boarding.

We were not the only people in the park who wanted to see it after dark. There was an excitement in the air as the final hour of the day grew near. The sunset was magnificent, and the colors in the sky seemed to match the new colors of Cinderella Castle.

Through October 31, adults are allowed to dress in costume at the Magic Kingdom, as long as they follow Disney’s guidelines. Just because it is allowed does not mean that people are doing it. I saw one family dressed in costume, and that was it. I’m sure that the number will grow as it gets closer to Halloween.

I was happy to see that the Mickey pumpkins that are up and down Main Street, U.S.A. do light up and “dance” to the music after dark. Part of me thought that since the park closes so early most days, that would not be a thing this year.

Since many people had stayed to see Cinderella Castle after dark, I worried a bit about the crowd at the end of the night. It was always a sea of people after Happily Ever After, and I thought that this might be something similar. Since I don’t like to be crowded in right now, we decided to make the sacrifice one more time and we got in line for Big Thunder Mountain Railroad. If the Wait Time was close (which it was) we would get off after the parked closed for the night. After the ride, Frontierland and Liberty Square were mostly quiet. Once we arrived on  Main Street, U.S.A., though, it was a different story. It was packed! People were trying to get pictures in front of the lighted Cinderella Castle. Many of them were removing their masks for the pictures, which of course is strictly prohibited. The rest of the crowd was slowly making their way towards the exit.

We chose to hang back a little bit, because I didn’t want to be in the mass of people. It was better once everyone was outside of the park and heading in different directions. It was also nice to be able to turn around and see the Main Street Train Station lit up. I’ve missed seeing Walt Disney World after dark.

If you’re looking for smaller crowds, I’d recommend visiting on a weekday. Even though staying open an extra two hours in theory should cut down on the crowds, I think that it did the opposite. Cinderella Castle is always so beautiful after dark, and the people who were there on October 16 wanted to see it. If you want to ride as many rides as possible, arrive early and hit your favorites first. Capacity is limited to 25%, but 25% is still a lot of people. If people follow the rules and pay attention to those around them, it is still a safe environment.