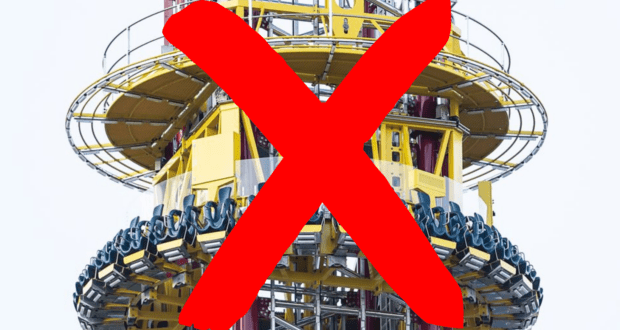 The Orlando FreeFall drop tower attraction at ICON Park on International Drive in Orlando will be taken down, following the death of a teenager in March 2022.

Operators for the Orlando Free Fall attraction at ICON Park in Orlando announced on Thursday that the attraction will be taken down. The fate of the new attraction was uncertain following the death of 14-year-old Tyre Sampson in March of this year.

JUST IN: The Orlando Free Fall, the drop tower attraction on International Drive, will be taken down, according to the ride's operators. The ride was closed indefinitely after 14-year-old Tyre Sampson fell to his death in March. pic.twitter.com/TiyIa4PzJs

Sampson and his friends visited ICON Park during Spring Break this year, and as the group made its way around the park, Sampson was reportedly denied access to more than one ride on the site, as personnel said he exceeded parameters for guests on the attractions. However, Sampson was permitted to ride the Orlando Free Fall, a drop tower attraction operated by Slingshot Group, LLC, that lifts riders more than 400 feet above the ground before “dropping” them in a freefall before large, strong magnet “brakes” stop the freefall and gently lower riders to the ground. Sampson and his friends boarded the attraction, and shortly after they were lifted to the highest point on the attraction–more than 40 stories above the ground, the seats on the ride tilted forward, as they were designed to do, and Sampson reportedly fell from his seat at that time to the ground below. He was pronounced deceased at a local hospital shortly thereafter. Per Sampson’s autopsy report, the teen was more than 100 pounds over the weight limit for the ride. It was reported that ride operators manually changed sensors on the ride that would have kept the ride from functioning with someone of Sampson’s size in a seat without the restraint adequately applied.

The manual modifications to the attraction rendered it unsafe to operate and played a role in Sampson’s fall, per the Florida Department of Agriculture and Consumer Services (FDACS) report, written by Quest Engineering and Failure Analysis. FDACS is the state entity that regulates rides and attractions.

In the report, the engineering firm states that the manual changes made by the operator allowed the safety harnesses on those seats to open to “almost double” the normal range, according to FDACS Commissioner Nikki Fried. In a statement on Thursday, Slingshot Group’s CEO Ritchie Armstrong announced that the company decided to take down the ride after hearing about multiple calls for the attraction to be removed.

“We are devastated by Tyre’s death. We have listened to the wishes of Tyre’s family and the community and have made the decision to take down the FreeFall,” Armstrong said in a statement. “In addition, Orlando Slingshot will honor Tyre and his legacy in the classroom and on the football field by creating a scholarship in his name.”

An unsigned statement from ICON Park details the park’s agreement with the decision.

“Tyre’s death is a tragedy that we will never forget,” the statement reads. “As the landlord, ICON Park welcomes and appreciates Orlando Slingshot’s decision to take down the ride.”

No date for the dismantling of the attraction was given, and details about the scholarship were not shared.