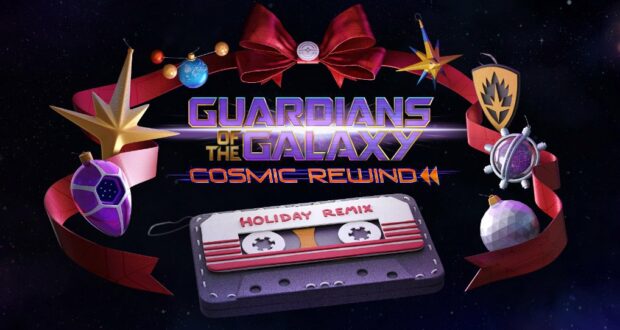 Disney World has just made another announcement about the 2022 holiday season at the parks, and this time, it involves one of EPCOT’s newest attractions!

The 2022 holiday season at Disney World is the first one since EPCOT’s long-awaited Guardians of the Galaxy: COSMIC REWIND attraction opened at the park in late May, following an unauthorized, leaked announcement about the attraction’s projected opening date by a Disney exec over Corporate Affairs.

Sadly, the exec was fired shortly after the leak.

On Friday morning, however, an announcement about a brand-new holiday treatment for the new Guardians-themed attraction was made (and this one was authorized).

Journalist Scott Gustin shared the news in a tweet that reads, “NEW: Disney released new artwork for Guardians of the Galaxy: Cosmic Rewind “Holiday Remix” coming to EPCOT later this year. The holiday overlay will feature a “new song” that will feature a “mash-up of seasonal jams.”

The holiday overlay will feature a "new song" that will feature "a mash-up of seasonal jams." pic.twitter.com/L0igHEZvaG

Like many of the attractions at Disney Parks, EPCOT’s Guardians of the Galaxy: COSMIC REWIND attraction will get a holiday overlay that will be part of the season at the Walt Disney World Resort, which begins in early November and goes to the end of the year.

More information from Walt Disney Imagineering Senior Producer Wyatt Winter was shared about the new “Holiday Remix” for the attraction as well:

In the announcement on Friday, Disney Parks made no mention of the date on which the holiday overlay will debut at the popular new EPCOT attraction, but most of the holiday decor and overlays are in place by the date set by the Walt Disney World Resort as the kickoff to the holiday season, which is November 11 this year, so it’s fairly safe to assume the new Guardians holiday treatments will be installed by then as well.

2022-10-07
+Becky Burkett
Previous: EPCOT’s “Future World Hotel”: New Permit Filed May Give Clues about Disney’s Next Resort Hotel Annoucement
Next: Night Of A Million Lights WILL Return This Year!