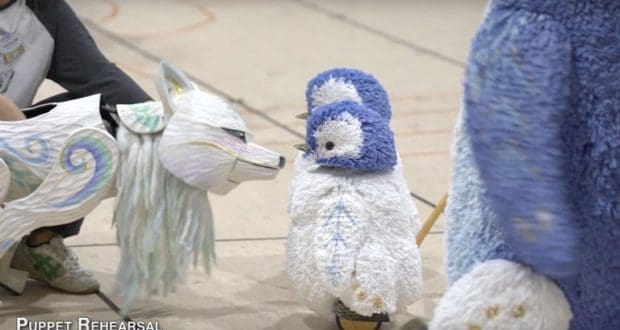 Behind the Scenes: The Holidays at Walt Disney World’s Animal Kingdom

A few days ago I was part of a hosted media group that learned a bit of information about some of the behind the scenes tricks at Disney’s Animal Kingdom. In the past, there were a few holiday decorations at the park, but this year that is not the case. There are special holiday touches both during the day and after dark throughout the park. The results do not disappoint.

I’ve already written about the basics of the new Disney’s Animal Kingdom options (click here to read!), so I thought instead I’d share with you some of the tidbits of information that we learned. We started by learning about the animal puppets that are now found during the day at Discovery Island. The official name is Merry Menagerie. It features puppets of cold weather animals such as polar bears and penguins. The animals want to play with guests, so go ahead and engage with them. There are several different types of animals represented. Not all species will be out at once, so you will want to return to Discovery Island. The animals that you see when you first arrive might not be the same animals that are there the next time you enter the land.

I need to mention the puppeteers who are controlling the animals. They all seem to be having a wonderful time! At one point during our event there was a Cast Member who was controlling a bird. She was unaware that anyone from the media group was watching her. There was a joy on her face as she made that bird soar that I will not soon forget. A few moments later, some children saw the bird, so she interacted with them. I watched magic being made.

One of my favorite things that we learned about the decorations in Discovery Island is something that many people will never notice. If you visit Disney’s Animal Kingdom, look at the snowflakes that are part of the garland that is over Discovery Trading Company. These beautiful snowflakes were handcrafted at Augusta Training Shop. This company employs adults who are physically or mentally challenged. The snowflakes are beautiful! If you are interested in purchasing one for your tree or your home, they are for sale on the Augusta Training Shop website: https://augustatrainingshop.com.

We learned a little bit about Diwali, which is being commemorated in Asia this year. Diwali is the Hindu Festival of Lights, and there are colorful lanterns in the land to celebrate. You need to see them both during the day and again at night. In Africa, there are authentic decorations to represent the season. Even the expats in Pandora are celebrating this year. There are some hidden items, including a Na’vi nutcracker and Santa’s sleigh pulled by two banshees. You might have to look hard to find them.

One place that I am not surprised has a lot of decorations this year is DinoLand U.S.A. Donald’s Dino-Bash is still going strong, but that doesn’t mean that the holidays haven’t arrived. The backstory is that Daisy decided that she wanted to decorate, so all of her friends decided that they wanted to as well. Each character area has plenty of extra touches. The “tower” has over 2,600 lights. Take a look at the snowman. He may have been around in past years, but there is something different about him this time. Instead of a carrot nose like most snowmen, he has a beak.

For the holidays there are extra food items for sale. You can purchase a pumpkin flavored pretzel or a cupcake that is decorated like a turkey. If you love character dining, make a reservation at Tusker House Restaurant. You’ll find holiday accessories and also music.

The best way to end your day at Disney’s Animal Kingdom is with the Tree of Life Awakenings. For the Christmas Season there are three different stories that you can see on the tree. The stories are called First Snow, Gift Giver, and Seasons of Light. They take place often, so you don’t have to watch too long in order to see all three.

The holiday offerings at Disney’s Animal Kingdom are something that you need to see for yourself. Pay attention to the small details, such as the dog cone at the top of one of Russell and Dug’s trees. The details that most people will never notice make the holidays even more fun. Disney has taken a park that was missing holiday cheer, and made it delightful this year.