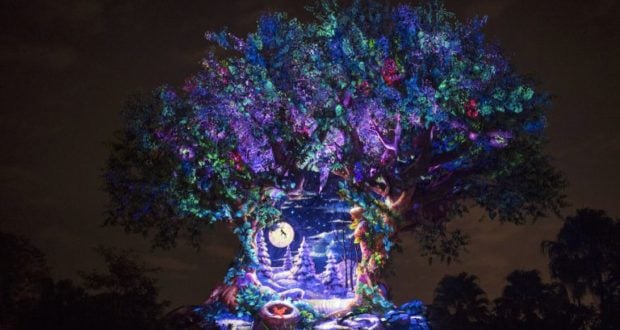 The Holidays Have Arrived at Walt Disney World’s Animal Kingdom

In the past, Disney’s Animal Kingdom did not live up to the other three Walt Disney World theme parks when it came to celebrating the holidays. Mickey’s Jingle, Jungle Parade ended years ago, and since then there were just a few extra decorations. There was of course the spectacular tree at the park’s entrance, but you didn’t even need to enter to see that. Compared to the other parks and the Deluxe Resorts, the Christmas Season at Disney’s Animal Kingdom was always missing something.

I am pleased to say that 2019 is the year that all of that has changed. I was invited to be part of a hosted group for a family media day on November 9, which is the day after the season officially began at the park. I happily accepted the offer.

The majestic animal-themed tree still greets visitors outside of the park. It is as beautiful as ever. There were lines to take pictures near the tree both when we arrived and when we left. The decorations over the ticket windows at the main entrance have returned as well.

It is once you enter the park that you will notice the improvements. Discovery Island is now more than just a few decorations. There are “winter” animal puppets and puppeteers all throughout the main part of the land. The puppets are of animals such as reindeer, baby seals, and penguins. The puppets will interact with the guests throughout the area, and with each other as well. I was impressed by the number of puppets that were out and about. The puppets are in the area each day until 5:00, weather permitting.

Since my family and I are Annual Passholders who don’t live far from Walt Disney World, we decided to focus on the holiday additions. After we left Discovery Island, we went to Pandora – The World of Avatar. The largest change for the holidays here is next to Pongu Pongu. There’s a display that the expats who live there decided to put up to make the place feel a little more like Christmas back on Earth. It’s unique, and fits in perfectly with Pandora’s theme.

There are small Christmas additions throughout the park, but if you want to really get into the holiday spirit, head to DinoLand USA. There are extra decorations everywhere! The character areas are all decorated, and there are special touches throughout the land. My favorite extra was on the bone that serves as the sign for The Boneyard. It has a bow on it, as well as a tag that said “To: Pluto, From: Donald”. Most people won’t even notice little things like that, but it was a nice bonus. You need to stop by DinoLand, U.S.A. twice if you visit during the holidays, it is beautifully lit up after dark. Even the dinosaur at the entrance gets in on the fun.

Disney’s Animal Kingdom has plenty of opportunities to meet characters. Not only have the characters in DinoLand U.S.A. decided to go all out for the holidays, there are enhancements at other meet and greets. Mickey and Minnie are still ready to head out on safari, but they have added a bit of festive cheer to their outfits. Russell and Dug decided that it would be fun to decorate their clubhouse. If you love characters, you’ll want to include the meet and greets in your holiday plans.

In Asia, there are lanterns to celebrate Diwali, which is India’s festival of lights. These were beautiful during the day, but even more spectacular after dark. We didn’t make it too far into Africa because there was quite a crowd, but there is a holiday presentation there as well.

Once the sun went down we headed back to Discovery Island. This is what I was looking forward to the most. The Tree of Life Awakenings is one of my favorite things at Disney’s Animal Kingdom, and for the holiday season a winter theme has taken over. Seeing the Tree of Life covered with “snow” was surreal. I grew up in New England, and this reminded me of a Norman Rockwell painting. The Tree still comes to life, with fun scenes that include animals associated with winter. The scenes run often, so you won’t have to wait long to see something whimsical. I really enjoyed this, and I will soon be back to watch again.

The other addition to Discovery Island is luminaries of various animals. They line the tops of the buildings all throughout the land. Unfortunately, most of the luminaries weren’t working last night. There was once section that was on, and the lights twinkled and danced to the land’s music. Most of them, though, were dark. I don’t know what was going on. I hope that they will all be working the next time I visit, because from the descriptions that I’ve heard it sounds like this is going to be magical.

One other extra touch that I really enjoyed is the snowflake design that is being used this year with the Disney’s Animal Kingdom logo. At first glance it just seems like a snowflake, but if you look closer it is made out of animal pictures. If you want to see the design close up, look for a banner near the tree outside of the park. It’s very well done.

We had a fantastic time at the family media day, and I’d like to thank Disney for inviting us. It is nice to see so many holiday offerings at Disney’s Animal Kingdom. My two favorite additions are the puppets when we arrived, and the winter projections on the Tree of Life. It’s nice to have a “feel” of winter, without feeling those winter temperatures!