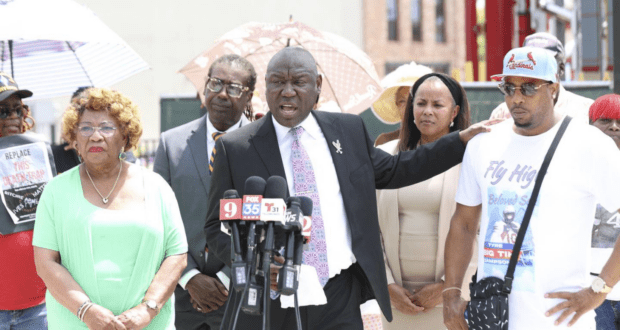 Attorneys, parents of Tyre Sampson say his death at drop tower ride is being swept “under the rug”

The father of the 14-year-old who died after falling hundreds of feet from the Orlando FreeFall drop tower attraction in March says the young boy’s death is being swept “under the rug.”

According to the Orlando Sentinel, Yarnell Sampson, the father of 14-year-old Tyre Sampson, visited the Orlando FreeFall ride at ICON Park just before Father’s Day.

But the mourning father was shocked to discover that the flowers, balloons, photographs, and messages that had formed a makeshift memorial at ICON Park had all been cleared away. Nothing remained of the memories of his son. “I just wanted to know, did the people know that a young man actually died right here?” he said. “It blew my mind that eight out of 10 I asked didn’t know. They had no clue.”

Earlier this week, Yarnell Sampson and members of his family renewed their demand for the FreeFall attraction to be torn down at ICON Park, alongside civil rights attorney Benjamin Crump, State Representative Geraldine Thompson, and local activists.

In April, members of Tyre Sampson’s family files suit against the ride’s owner, SlingShot Group, its landlord ICON Park, and the ride’s manufacturers and installers, alleging negligence on their part.

“These companies cannot be allowed to get away with this,” attorney Benjamin Crump said. “To Slingshot Group, to ICON Park, executives, you all cannot simply sweep this under the rug as if Tyre Sampson’s death doesn’t matter.” According to State Representative Geraldine Thompson, the “Tyre Sampson Bill” is to be filed on the first day of the state’s next legislative session, which will be on March 7, 2023. Accorrding to Thompson, the bill will look at the “safety record” of any company that wants to operate an attraction similar to the FreeFall tower.

But regardless of Sampson’s death in March at the Orlando FreeFall drop tower ride, Thompson said that the Slingshot Group currently has a lease with ICON Park to host a second ride, a move that Thompson says shows the entity is “tone-deaf.” But Trevor Arnold, attorney for the Orlando Slingshot, said in a statement that the company supports “the concepts outlined” in Geraldine Thompson’s proposed bill, and that they are not planning to open a new ride at ICON Park. Rather, he says, hopes to reopen the same ride where Tyre Sampson fell to his death–the Orlando FreeFall–as soon as they receive approval to do so from the state of Florida.

Arnold also said in the statement that the Slingshot company is working to return pieces from the makeshift memorial to Tyre Sampson at ICON Park to his family.

2022-06-23
+Becky Burkett
Previous: Avoid the Crowds with These Attractions & Experiences in Walt Disney World
Next: Celebrate Halfway to the Holidays With This Sneak Peek of Some Very Merry Merchandise