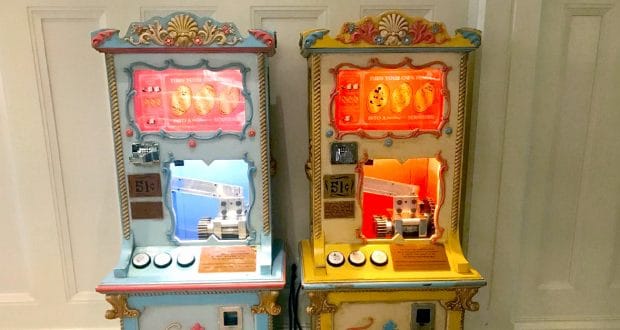 9 Reasons You Should Collect Pressed Pennies At Walt Disney World

You may be wondering how these machines came to be. After the introduction of the railroad in the United States people would place pennies on the track, wait for the train to come by and roll over them, creating the elongated smooth oval we are familiar with, then scribe the name of the place the penny was squished. The more modern way of penny pressing actually began in 1818 when a jeweler’s machine was modified to press the coin and emboss a design onto it.

The penny is run between two rolling curved plates with up to 2500 pounds of pressure. One plate is smooth and helps to make an elongated coin and the other plate presses a die embossed with an image into the now smooth elongated coin. Placing the design on the roller was left for artisans who used a variety of method putting the design on by hand. It took artisans around two days to create by hand the pressing plate image. The first machines located in the United States were found at the World’s Columbian Exposition held in Chicago in the 1890’s. These became popular souvenirs at the various World’s Fairs that followed. In the mid 1960’s individual artists began making and selling their own designs on rollers. By 1985 the current coin-operated machine designs were flooding the market and the elongated coins were finding new popularity at places like theme parks, such as Disney, museums, zoos, sports arenas, and other landmarks. There were now machines featuring historical events and celebrations such as weddings, new baby, etc. Even corporations have commissioned special designs unique to them.  There is an Elongated Coin Museum in Olympia, Washington if you would like to learn more about this unique souvenir form. There have been several books published featuring the pressed pennies, just Google “Elongateds”. This collecting of Elongateds is popular in the United States, United Kingdom, Spain, Japan, China, Germany and France.

9. The machines at Walt Disney World press pennies, dimes and quarters. It is a relatively inexpensive way to acquire Disney souvenirs. You can decide ahead of time how many you will collect on your next trip keeping that part of your budget certain. These are great collector items for yourself, and even family and friends who are not able to go to Disney themselves.

8. The machines are present in/near every Walt Disney World Park attraction, in the resorts, at Disney Springs and even at the Disney Cruise Line terminals. To see a list of all the pressed coin machines at WDW, visit The Unofficial Walt Disney World Pressed Coin Guide here: http://www.presscoins.com/   you can search by design, location or type(s) of coins. Since the machines are often moved around and the designs change this is the best way to keep up with the most current designs available. There are always a lot of new designs coming out to keep your collecting fresh. There are a number of sites that attempt to keep track of all the coin pressing machines, but it is challenging to keep up since they are often replaced with new dies, or moved around the whole resort. Disney has not published an Official list of the designs/machines, so collectors have to rely on each other to learn about any changes/additions.

7. They are a flat item that fits in an official Walt Disney World collector’s album, or can be used in scrapbooking. If you don’t want to fork out the dough to store your pressed coins in the album you can coat them with clear nail polish to keep them from tarnishing. Those collector books are made specifically to hold the coins with little to no air, cutting down on the tarnishing. They are easy to carry with you while enjoying the park, easier than the additional coins you were carrying prior to making the elongated coin.

6. You can collect new penny designs each time you come. Some machines are are now pre-loaded with circulated pennies, not your choice of penny you want to use. Expect the pennies to have a lot of zinc in them leading to the silvery streaking in the design. Some of the machines have shown the columns of the Lincoln Memorial when pressed with the design but collectors will have no way of ensuring it is the “head” side of the penny receiving the image. The only advantage to using these machines is that you can easily use paper money or even your credit card to pay for the pennies, which means you will not have to carry around as much weight in coins. Disney excels at making it easy for us to spend our money at the resort and now it has entered the coin pressing machines.

5. It may be the only way to get a souvenir from a number of attractions. Some attractions, such as the Liberty Belle Riverboat in Magic Kingdom has a penny presser image in a machine found near the exit of The Hall of Presidents. There is no other Liberty Belle merchandise in the parks

4. It is a way to collect designs featuring your favorite Disney character(s). You may find a machine that combines your favorite character(s) and a favorite attraction, such as one that featured Chip & Dale riding Splash Mountain.

3. You don’t have to go into the Parks to collect them. The resorts also have pressed penny machines, and there are more in Disney Springs. (Even the water parks have a collection of machines now. But you will have to pay to get in there too.)  Once you start collecting you will find your skill at spotting the machines very effective. Not having to pay the admission price means you can afford more of the pressed coins in these locations.

2. They become a piece of Walt Disney World history. There are many dies that have already been retired so those early pennies you squished may have a good return on investment if you choose to sell your collection in the future.

1. It is fun to search for them. It becomes a bit of a scavenger hunt for kids (of all ages) to search for and be the first in the family to spot the coin pressing machines. There may even be more than one at each attraction/resort/shop. You could conduct a family scavenger hunt for each park to see who can collect the most of a particular character/theme, if you are looking for a new way to experience the park.

TIPS: Choose older pennies, pre 1982, when the U.S. Mint used copper only to make the pennies. Otherwise you will see streaks of zinc in the penny when it is pressed. Canadian pennies actually produce a better image. When placing the penny in the machine, face the head side away from the quarters and you will still be able to read the year of the penny on the smooth side. Many collectors use a specific year special to them for some reason, or one that corresponds to a specific event.  If you have a less than shiny penny you can use small amount of ketchup, rubbing it in with a small brush, rinse, then make a paste with baking soda and small amount of water. Rub this over the penny using your fingers and when rinsing it away you should see a shiny penny.  Another tried and true method is using a commercial product named Brasso, or NevrDull that leads to a brilliant shine. IF there is something gooey on your coin use Goo-Gone. If you are feeling lazy just place your penny in a small amount of Coca-Cola and let it sit for a few minutes.