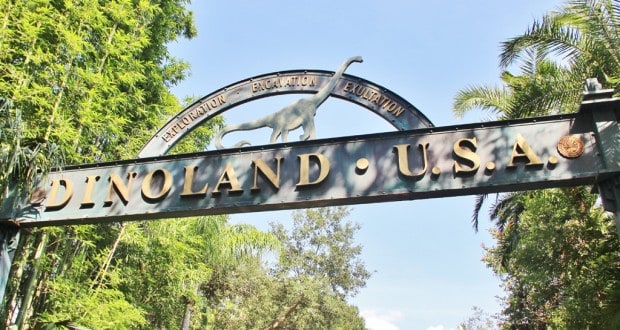 Disney’s Animal Kingdom is the largest of the four theme parks in Walt Disney World and it allows guests to tap into their wild and adventurous sides. Featuring a beautiful message of the preservation of nature and planet Earth, the park emphasizes conservation and is home to many entertaining attractions and shows. One of the most enjoyable areas of the park is Dinoland which is home to a series of zany and thrilling attractions, games, stores, and dining. With so many features to be enjoyed in Dinoland, there is no surprise that the area has a rich history and is full of interesting facts and details. Here are ten fantastic facts about Dinoland in Disney’s Animal Kingdom.

9. Dinosaur’s Pipes – The most thrilling attraction in Dinoland is Dinosaur which takes guests into the Dino Institute where scientists have discovered the technology to send guest back in time. Instead of a serene tour with the dinosaurs, guests are transported back perilously close to the meteor impact to try and bring one particular dinosaur back to present day. Before the load platform, guests descend down a flight of stairs and pass underneath an interesting set of pipes that pay homage to the original sponsor of the attraction. The pipes are red, yellow, and white and each feature a complicated formula. The pipes are actually meant to represent ketchup, mustard, and mayonnaise and are left over from the days when McDonalds was the attraction’s main sponsor.

8. Dinosaur’s Sign – When Dinosaur first opened, its name was Countdown to Extinction. This title lasted from opening in 1998 to 2000 when Disney released the feature film Dinosaur and the attraction’s name was changed to match. A detail from the original version of the attraction exists today as a tribute to its history. Just before boarding the Time Rovers, guests should look for a series of letters and numbers spray painted onto a wall near the loading zone. The sequence reads “SECTOR CTX-WDW-AK98” with CTX standing for Countdown to Extinction, WDW standing for Walt Disney World, and AK98 paying tribute to the initials of the park and its opening year of 1998.

7. A Tribute Highway – Many of the pathways in Dinoland have been made to look like winding highway roads and scattered throughout the area are road signs for the fictional highway. The signs read US 498 and upon closer inspection pay tribute to the opening date of the park in April of 1998.

6. Chester & Hester – A large portion of Dinoland features Chester & Hester’s Din-O-Rama which is filled with midway games, quirky signs and props, and a pretty awesome shopping location full of dinosaur merchandise. While many guests recognize their names, they might not know the backstory of Chester and Hester. The duo originally ran a gas station in the area (some pumps can still be found), but when dinosaur bones were discovered and the Dino Institute set up shop, Chester and Hester realized they could make more money selling dinosaur trinkets and souvenirs. So they closed up the gas station and created the interactive and fun setting guests can enjoy today.

5. Fake Asphalt – As mentioned before, many of the walkways throughout Dinoland resemble highway roads and look as though they are made out of real asphalt. IMagineers knew that to combine asphalt with the beating Central Florida sun guests would find themselves constantly sticking to the melting road! So Imagineers actually designed the road to be composed of concrete made to look like asphalt so that they could have the effect they were looking for without the melting mess.

4. A Corny Doctor – Guests who experience Dinosaur are thrown into peril on the adventure by one scientist in the Dino Institute. Dr. Grant Seeker (groan!) is the man set on bringing a dinosaur back to present day and he has a pretty corny name to live up to!

3. Time Rover’s History – Part of what makes Dinosaur such an amazing attraction is the bumpy and jostling experience riding in a Time Rover. The vehicles are called Enhanced Motion Vehicles and feature a regular base with wheels that run smoothly throughout the entire attraction and a top that moves freely in motions that make guests feel as though the entire Rover is bumping along. The technology for these vehicles was originally developed in Disneyland for the Indiana Jones Adventure and enhances the experience back in time for guests.

2. Boneyard Sign – Guests who stop to dig in the Boneyard might notice something interesting about the shape of its sign. When turned on its side and oriented to point North, the Boneyard sign represents the shape of the original version of Disney’s Animal Kingdom. Currently the shape of the park is different thanks to a side section that was previously Camp Minnie-Mickey that is currently under construction for the new Pandora themed area based on the world of Avatar.

1. Sue’s Twin – Outside of Dinosaur in a small plaza is a massive skeleton of a Tyrannosaurus Rex. This particular skeleton is a reproduction of Sue, a forty foot long dinosaur who is more famously known as the most complete T-Rex skeleton ever discovered. Guests should definitely take a few moments to stop and enjoy taking some photos with Sue’s twin!

2015-07-31
Caitlin Kane
Previous: 5 Things Insiders Don’t Want You To Know About Walt Disney World
Next: Can You Match Each Disney Movie with It’s Background? Quiz