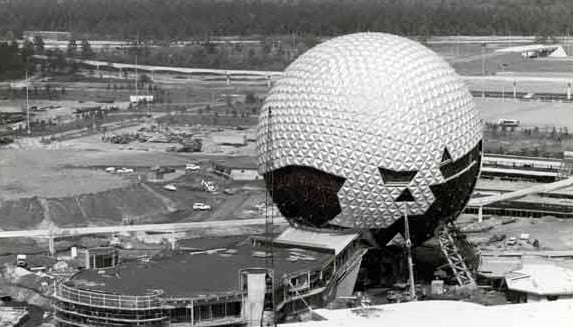 8 Totally True Facts About The Construction Of Walt Disney World

When Walt Disney World opened in 1971, Imagineers had completed one of the most ambitious construction projects ever designed. Since then, the addition of new parks and resorts have allowed Imagineers to continue to push the boundaries in landscape design, architecture and ride construction, completing some truly incredible feats along the way. Always looking for the new and creative ways to bring the stories of Disney to life, new materials and technologies have put Disney at the forefront of innovation. For the trivia buffs, here are 8 totally true facts about the construction of Walt Disney World.

As the iconic image of Animal Kingdom, the Tree of Life is a wonderful mixture of design and technology. At a distance, it appears to be an enormous tree, but as you get closer, you begin to realize just how large and intricate it is. In order to hold the weight of 8,000 branches and over 102,000 man-made leaves, while also withstanding the force of a hurricane, Disney Imagineers decided to use an oil rig as the base of the tree. Over top of that sits a formed layer of rebar and metal lath, over which concrete was poured. Sculptors were then brought in to meticulously hand-carve the animals using a special cement that acts like plaster. In the end, over 300 animals were carved into the trunk.

While thunderstorms can be common during certain months of the year, they usually pass quickly and guests can get back to enjoying their day in the parks. In order to help ensure the safety of guests during the storms, Imagineers have strategically placed lighting rods throughout the parks in order to direct lightning strikes directly into the ground. One of the most unique lightning rods can be found at the entrance to Hollywood Studios. A 5’6″ Statue of Mickey Mouse sits atop the Crossroads of the World structure. What you can’t tell from down below is the fact that Mickey’s right ear is made of copper and acts as a lightning rod, dissipating a lightning strike directly into the ground.

As you walk down Main Street U.S.A., Cinderella Castle greets you with its golden colored spires and beautifully blue rooftops with intricate brickwork below. One of the surprising facts about the construction of Cinderella Castle is the fact that no bricks are used at all. Instead, the entire structure was created using steel beams, concrete, plaster and fiberglass and the brick detail was added as a finishing touch.

Federal Aviation Administration regulations mandate that any structure that is 200 feet tall must have a flashing red light on top as a warning to any low flying aircraft. Not wanting to ruin the illusion and the magic, the tallest structures in Walt Disney World are all designed to be 199 feet tall (up to 199.5 feet in some cases) in order to maximize height without putting a bright glaringly red bulb on top.

With only 199 feet to use, it can be difficult to give guests the perception that the structures in Walt Disney World are enormous. In order to give some of the buildings the illusion of height, Imagineers use a design technique called forced perspective. This is where the features like windows and other design elements are normal sized at the bottom, but get subsequently smaller the higher you go. This makes it appear as if the building is much larger than it actually is. This technique is used on buildings like Cinderella Castle, the buildings of Main Street U.S.A., the American Adventure Pavilion in Epcot as well as the Eiffel Tower in the France Pavilion.

As the tallest mountain in the parks, Expedition Everest was an incredibly ambitious construction project. It was the single most expensive attraction to be built in the world with a total price tag of $100 million. One of the main challenges came from the fact that the mountain had to be built around the track as it was assembled. Also inside the mountain would be the most advanced audio animatronic that Disney had ever created. While a crack in the concrete foundation under the yeti has kept him motionless for the past few years, Imagineers have said he will be fixed to allow him to move again.

Spaceship Earth is the central icon of Epcot and stands at 180 feet tall. This geodesic sphere weighs in at a whopping 15.5 million pounds and is covered by 11,324 alucabond panels to give it the signature silver/grey color. The attraction is actually two spheres in one with the inner sphere housing the frame and holding the ride while the outer sphere sits 2 feet further outside to accommodate the rain collection system. Guests standing underneath won’t get wet as it rains since the water is collected through a series of gutters and redirected into the World Showcase Lagoon.

When Walt Disney was walking through Disneyland, he noticed a cast member in a cowboy costume walking through Tomorrowland on his way to Frontierland. To avoid this problem, when it came time to design Disney World, Imagineers found a simple and effective solution – putting utilidors underneath the park. Utilidors (utility corridors) were a great way to allow cast members to get to different areas of the park without passing through the crowds and thereby maintaining the magic in each land. The only problem with the concept was the fact that the land in Florida had a high water table, so digging down was not an option. Instead, the utilidors were constructed on ground level and the entirety of the Magic Kingdom was built on top, this means that the park is actually on the second floor, with the utilidors hidden underneath on the first floor.