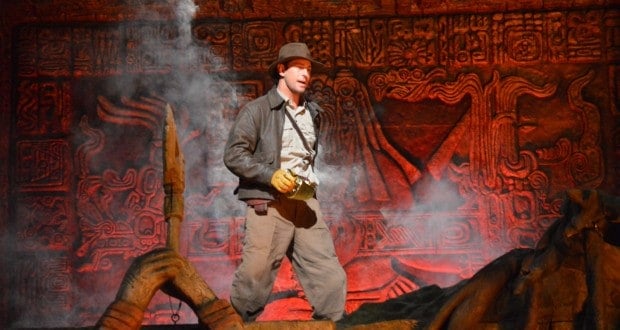 8. Your Chance in the Spotlight

For anyone who’s ever dreamed of being in an Indiana Jones film, the best part of this attraction will certainly be the “casting call”.  If you want to be chosen to participate in the show as an extra (you’ll even wear a costume) for the street scene in Cairo, your best bet is to sit as close to the front of the theater as you can.  When the casting director asks for volunteers (18 years of age or older), make sure you raise your hand enthusiastically.  As we’ve discovered, waving your arms crazily and shouting excitedly doesn’t hurt either!

Flying bullets, flaming vehicles, exhilarating stunts, and explosions galore await guests at Indiana Jones Epic Stunt Spectacular.  The show features scenes that recreate favorite moments from Raiders of the Lost Ark, using sets inspired by the movie.  Look closely at the gold idol that Indiana Jones tries to steal in the opening scene of the attraction – it’s actually a replica of the idol that was used in this exact scene from the movie.  Every effort was made to ensure that the show would look authentic for fans of the movie.

On your way to/from the theater, keep an eye out for an area just outside of the attraction featuring a well and a sign saying: “Warning: Do Not Pull Rope”.  We hardly need to say it, but – pull the rope!  You’ll be rewarded with the sounds of a worker at the bottom of the well, whom you’ve apparently stranded there.  This small area is often overlooked, so keep your eyes peeled!

Indiana Jones had some heavy hitters in attendance when it opened at Hollywood Studios.  Michael Eisner and George Lucas both attended the very first show in August of 1989, and they even hung around after the show ended to take some media and publicity shots.  Nowadays, guests wishing to interact with the show’s stars themselves can wait until the show has ended and the crowds have disappeared; sometimes, it’s possible to get an autograph or two from the performers.

Despite widespread rumours a few years ago that Disney would be closing the Indiana Jones Stunt Spectacular as part of the revamping of Hollywood Studios, the attraction has thankfully NOT closed, to the relief of Indy fans!  The show did close back in 2000 so that it could be updated for FastPass+ use, and for other necessary renovations to the queue and sets.  But the show itself hasn’t really changed at all since its debut in 1989, and remains popular to this day.

So popular is Indiana Jones Epic Stunt Spectacular, that it was even spoofed on Saturday Night Live back in 2014.  The show’s host, Drake, took on the role of a Disney World cast member in SNL’s sketch, and did a hilarious job of showing what actual cast members must have to do when interacting with audience volunteers doesn’t go smoothly!

If you’ve ever wondered about the stats for the impressive sets used in the show, look no further!  Each of the sets weights about 100 tons, which is impressive considering the sets are constantly moved and repositioned during the show.  And that huge, iconic, rolling boulder?  It weighs in at over 400 pounds, with a diameter of a dozen feet.  It’s been claimed that these are the heaviest moving sets ever made.  Understandably, there are very few attractions anywhere on property with more mechanical parts and special effects than Indiana Jones!

1. A Piece of the Indy Action

Even if you weren’t chosen to participate in the show as an extra, you can still bring home your own piece of the Indiana Jones action.  Head to the Indiana Jones Adventure Outpost Store near the theatre entrance; here, you’ll find all the Indy merchandise you could ever want.  Perhaps even more exciting are the props and setting of the shop itself.  There’s a replica WWII tank, thought to be one of the tanks used in “The Last Crusade”, as well as authentic-looking machine guns, excavation equipment and old crates, trunks and exotic artifacts.