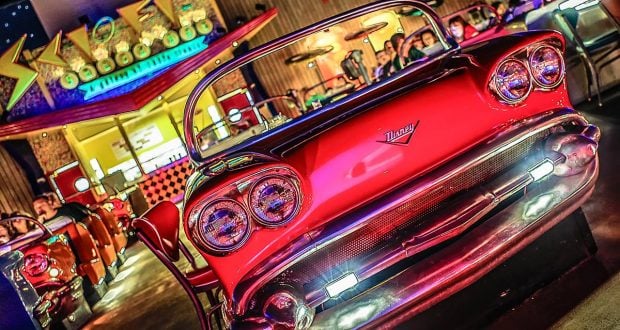 The menu at Sci-Fi Dine-In Theater Restaurant features American classics. Some of them have names that fit with the theme, such as Sci-Fi Wedge Salad and Dine-In BBQ Burger. You’ll find steak, burgers, pasta, salads, sandwiches, and other choices. Make sure that you save room for something sweet. What dessert says 1950’s better than a Hot Fudge Sundae? You might want to consider the House-made Sci-Fi Candy Bar instead. The food at Sci-Fi Dine-In Theater may not be overly fancy, but that fits in nicely with the theme.

If you have a food allergy or follow a special diet such as vegan, dining at Sci-Fi Dine-In Theater Restaurant should not be a problem. Make a note of an allergy when you make your reservation, and let your server know about any special dietary requests that you need to make. The chef and the staff are more than accommodating.

There have been times when Sci-Fi Dine-In Theater Restaurant has served breakfast. Both regular and character breakfasts have been held within the restaurant. Whether or not Walt Disney World will decide to serve breakfast there again is anyone’s guess, but with all the changes taking place at Disney’s Hollywood Studios there is always a possibility.

Milkshakes are a classic treat from the 1950’s, and the ones served at Sci-Fi Dine-In Theater Restaurant do not disappoint. You can order chocolate, vanilla, Oreo, or Sci-Fi Specialty Shake. If you are vegan or allergic to dairy, let your server know, or call ahead of time. If they have the ingredients on hand they can make a dairy-free milkshake that is just as tasty.

At Sci-Fi Dine-In Theater Restaurant, you’re supposed to be enjoying dinner at an old fashioned drive in theater. There is a screen at the front of the restaurant, and old movie trailers play while you eat. You might see trailers from Plan 9 From Outer Space  or Attack of the 50 Foot Woman. These are films that went on to become classics, but not because of their quality. The trailers add to the appeal of the restaurant. There are also short clips that will invite you to go to the concession stand. It’s a lot of fun.

3) An Appearance By Walt Disney

Keep your eyes open and on the screen at the front, because at one point you might see a clip starring the man who started it all. If you want to make sure that you don’t miss the Walt Disney video, ask your server when it is about to be on so that you can watch for it.

At Sci-Fi Dine-In Theater Restaurant, it is always twilight. That makes for a beautiful atmosphere to dine in. It also makes it a little bit hard to read the menu, you might want to have a small flashlight or your cell phone on hand so that you will be able to see what is available.

If your parents would not let you eat in your car while growing up, then you’ll feel like a rebel at Sci-Fi Dine-In Theater. Most of the tables are cars. You’ll sit two across, and there are three rows per car. If you hear your mother’s voice scolding you for eating in the car and feel guilty about it, don’t worry. There are a limited number of picnic tables as well.