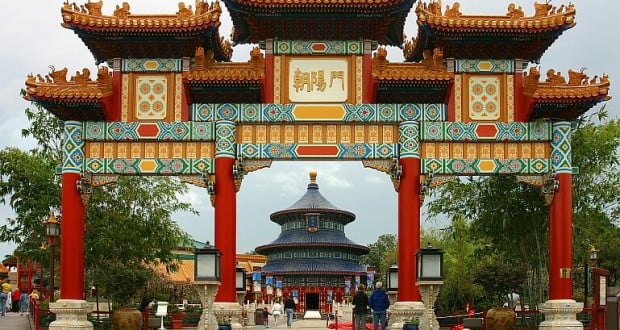 Slow down your pace and take in all the sights, sounds, smells, and tastes of this beautiful pavilion in Epcot’s World Showcase.

You will notice the largest building in the pavilion is a Disney-sized, or half-sized replica of The Hall of Prayer for Good Harvest. The original building is found in Beijing, China, built in 1420 and is known as The Temple of Heaven. The Emperor used to perform a very significant ceremony once a year in this temple. He would enter, wearing special clothing, and perform a specific prayer to the Heaven asking for good harvests for his people. If he deviated at all from the ceremony bad luck would come upon the farmers so it was very important to the nation that the Emperor do it exactly as written. The Hall of Payer for Good Harvest is the round building set back from the front, on the right hand side. When entering make sure to go stand in the center of the room and speak something in your normal voice while looking up at the gold medallion in the center of the ceiling. Notice there are 12 exterior columns, representing the 12 months of the year and the Chinese 12-year cycle. Inside are four columns representing the four seasons of the year. Heaven is represented by round things, and you will see plenty of that shape in here.

How landscape created in China is beautiful and quiet, subdued. Gardens in China tend to be more subtle than those in Japan where everything is carefully planned out and displayed more boldly. There were Koi fish in the pond, just like there are today in the pond of the Japan pavilion. The Koi became easy victims for birds of prey because the pond is directly open to the sky. The fish in the Japan pond are safer from those birds because Japan has buildings, multiple levels, bridges, etc, around the pond offering the necessary layer of protection. The gardens, pond, rock formations are all beautiful and offer a retreat from the hustle and bustle of World Showcase.

The smell of the food! The table service restaurant Nine Dragons is at the front of the pavilion and has very good food. But what you will probably center on with your nose is the Lotus Blossom Café that serves up a small but tasty menu that smells like Heaven, especially if you are hungry. You may find yourself eating here even if you aren’t hungry just because it smells so good. What many people don’t realize is that it is a great value for the money. You can choose appetizers or for a more filling meal the combo meals. The Shrimp Fried Rice with Egg Roll is especially filling. It can easily be shared also. The frozen fruit smoothies come in Strawberry or Mango flavors are quite refreshing.

The very large variety of merchandise. Entering the Bountiful Harvest Shop you will find apparel, home goods, incense, jewelry, hats, handbags, wallets, Chinese Zodiac items, chopstick sets, tea sets, shoes, hair accessories, dolls, plush, toys, snacks, beverages, personalized items, fans, books, and so much more. Surely with all the shopping in this pavilion you will find that special souvenir you were looking for.

The film Reflections of China is often overlooked by guests but the 2003 circle-vision film brings the viewer to nine Chinese cities and many beautiful landmarks and places of historical importance. You will get a view of the people of China and that is worth your time. There are no seats in the theater but there are “resting bars” you can lean on while taking in the 360-degree screen.

Don’t miss the Live Entertainment in this pavilion. See the Jeweled Dragon Acrobats that are youthful, strong, balanced, and very entertaining. They have multiple performances just past the Gate entrance. They are very popular and it is worth showing up early to get a seat on a couple of benches or on the concrete patio area.

The House of the Whispering Willows museum houses a display of Tomb Warriors– you will see replicas of the Tomb Warriors that were discovered in 1974 near the tomb of the first Emperor of China, dating back to 210BC. Keep in mind that these replicas are 1/3 the size of the originals which are life-size. It was typical for Emperors to have these stone armies to protect them in the afterlife. One emperor even had a mess hall for his warriors to be fed in. Don’t bypass the opportunity to learn more about the country of China.

Architectural details are everywhere in the China pavilion. The predominant red color signifies Happiness. The gold details represent the Emperor and the blue color on the roofs is pretty typical of Taos temples. The dragons portrayed on the roofs, inside on walls and ceilings, represents Power and the Phoenix, also very predominant in the pavilion, represents Prosperity and Marriage. There are many levels of roof lines and structures as you enter through the Gate of the Golden Sun. The Gate is similar to the one at the entrance to the Emperor’s Summer Palace. Don’t miss the “story” on the roof of Nine Dragons Restaurant near the World Showcase Promenade.

2015-05-11
Cassie
Previous: 11 Characters We Want To See More Of At Walt Disney World
Next: 7 Amazing Features of the Liberty Square Riverboat