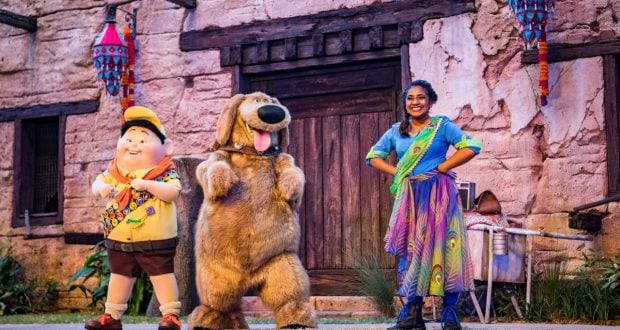 8 Things to Know About Up! A Great Bird Adventure at Walt Disney World

Disney’s Animal Kingdom has offered an array of experiences that feature wildlife, nature and thrills for more than 20 years. Whether you’re hoping to see beautiful and exotic animals, eager to go on a safari in the African savanna or ready to learn how to handle a mountain banshee, Disney’s Animal Kingdom has something for you and every member of your family. One of the most popular attractions enjoyed by families in the park is the new Up! A Great Bird Adventure show in the Caravan Theater, just outside the fictional Anandapur Village. This impressive presentation is one of the best in the park, so don’t let the opportunity to see it fly past you! Here are 8 interesting things about the show that make it well worth a visit.

8. It’s only the second production to be shown at the Caravan Theater.

7. More than 15 species of birds take part in the show.

Up! A Great Bird Adventure is no boring sideshow. Rather, it showcases over 15 different species of exotic birds from around the globe. Feathered and flying friends from South America, North America, India and other African countries make daily appearances as part of the production. Guests are delighted by the beauty and wonder of birds like toucans, parrots, macaws, an African fish eagle and a marabou stork with an amazing 10-foot wingspan, among others.

6. There’s a lot going on behind the scenes.

Twenty—yes, twenty—animal trainers were involved in the development of, preparation for and rehearsals before the new bird adventure show. It took the hard work and expertise of these trainers to ready the birds and the hosts for the daily presentations. Four trainers work with the birds and the show’s hosts during each of the daily performances.

5. Lovable PIXAR characters take the stage in the show.

Everybody loves a good PIXAR film, but the real love is for the characters that set the film into motion. There were no characters in the previous Flights of Wonder show, but a big part of the fun of Up! A Great Bird Adventure is the interaction between the host and Russell and Dug the Dog from Disney/PIXAR’s UP! If you’re a fan of the lovable Wilderness Explorer and his squirrel-seeking canine companion, don’t miss this show. It’s the first time the two have ever shared the stage together!

4. The theater itself is impressive.

Throughout the Walt Disney World Resort, Imagineers have gone to great lengths to add intricate details to buildings, attractions, ride queues—virtually any spot in the parks where there’s room for a story to be told. Imagineers are experts in storytelling—but they don’t limit themselves to using only words to do so. For example, the Caravan Theater isn’t simply a stage with a backdrop and seating for Guests. Instead, it was designed to tell a story of times long ago. As you enter the theater, look around you, and you’ll notice that the theater was designed to look like ruins of buildings in the Himalayan Highlands.

3. You’re not shy? Great! You’re just who they’re looking for!

Have you ever wanted to be part of a live show at Walt Disney World? You might just get that chance when you enjoy Up! A Great Bird Adventure. During one part of the presentation, the hosts ask for a Guest volunteer to help showcase some of the birds’ amazing talents! Think you have what it takes? Be sure and raise your hands high in the sky!

2. The show will take a break in September of this year.

Disney is always working to make sure that Guest experiences offer the very best in family entertainment, which means that from time to time, attractions will close temporarily so they can be updated, refurbished, etc. This year, from September 8 through September 14, Up! A Great Bird Adventure will take a brief sabbatical while updates are made to the show. Barring any unforeseen issues, Russell, Dug and all their feathered friends will be back on the stage on September 15.

There are a few more things we want you to know about this fascinating show. First, FastPass+ service is available for the experience, but you may not need a FastPass+ since there is seating available for a large number of Guests during each performance. Also, know that the show lasts about 25 minutes, and you’ll want to get there before it begins so you aren’t scrambling for a place to sit. Oh—one more thing—you know that the show takes place in the Caravan theater, but if you’ve not yet enjoyed this experience, you need to know that the theater is a covered, open-air venue with no air conditioning. If you’re visiting in the warmer months, it can be helpful to bring along a fan (or an Animal Kingdom guide map to use as a fan).