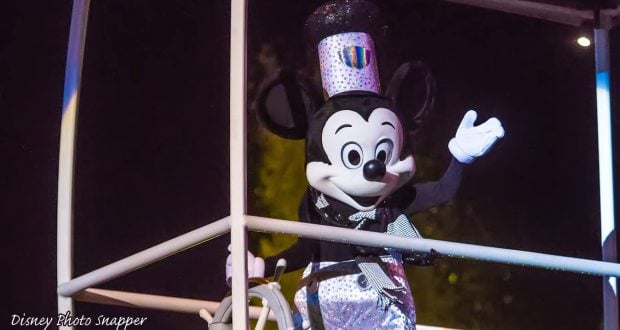 8 Facts And Secrets About Fantasmic! in Disney’s Hollywood Studios

Fantasmic! is 26 minutes of Disney characters on stages, water screens, and boats. The show is primarily about Mickey’s fight against nightmares, but features dozens of other beloved characters along the way. Fantasmic! is shown in the Hollywood Hills Amphitheater, tucked into the back corner of the park, with Tower of Terror. Disneyland and Tokyo Disneyland have similar shows with the same name, but this article discusses the show in Walt Disney World. Want to know more about Fantasmic!? Here are eight tips and secrets you might not know.

While Disneyland, Walt Disney World, and Tokyo Disneyland all show Fantasmic, the shows are different in each park. Fantasmic in Tokyo is a 360 degree show, with entirely different set pieces, and much more watercraft. In Disneyland, the Pocahontas scene is swapped out for Peter Pan, and the characters appear on the Mark Twain Riverboat at the end, rather than the boat from Steamboat Willie. The Walt Disney World version of Fantasmic! is the longest of the three versions, since it has longer bubble and villain montages.

Guests can book a dinner package to get reserved seating for Fantasmic!. The package is available at Hollywood and Vine, Hollywood Brown Derby, and Mama Melrose. At the end of your meal, you’ll get a voucher for your assigned section in the Hollywood Hills Amphitheater. For those on the Dining Plan, the credits at each restaurant are the same as if you weren’t doing the dinner package. Otherwise, you’ll be on a prix fixe menu. To book the dinner package, make sure you choose the package on the website, or designate that to a Cast Member if you call to make reservations. The caveat to the Fantasmic! Dinner package is that the times can book up fast, just like with the Candlelight Processional over at Epcot, so you will definitely need to make reservations at the 180 day mark.

During peak seasons, there will be two showings of Fantasmic! If that’s the case, try to plan on seeing the second show. It will be significantly less crowded than the first showing, allowing you a greater chance at a killer view, and a shorter line to boot.

Originally, Fantasmic! was called Imagination!. This name for the show went pretty far into the development process. Ultimately, Imagineers went with “Fantasmic,” a made-up word that had more trademark potential. The show’s history can be heard though, in the opening song.

When weather prevents characters or puppets on stage, there is a four minute long version of Fantasmic! that fans call the “taste of Fantasmic!.” This shortened version some of the projections and pyrotechnics in a condensed story. Preloaded fireworks still burst in the rain show, because the fireworks are more dangerous to unload than to set off during rain.

The Hollywood Hills Amphitheater was built specifically for Fantasmic!. It can seat 6,900 people, and has room for additional 3,00 standing guests. The stage features a man-made 50 foot mountain, where various performers appear. The moat around the island stage can hold 1,900,000 gallons of water.

Mickey Mouse performs in various costumes throughout the show, but notably wears three costumes from classic Disney movies: Steamboat Willie (1928), Brave Little Tailor (1938), and Fantasia (1940). Mickey appears near the end of the show in his Sorcerer’s Apprentice attire; he battles Maleficent dressed as the tailor, and steers the boat in the show’s conclusion as the black and white Steamboat Willie. Fantasmic! is the only way to see Mickey in these old school costumes. The show celebrates decades of Disney animations, and it’s really nice to see that even the pieces that Walt had a hand in are still being used and entertaining us.

Since the Hollywood Hills Amphitheater is an outdoor venue, you are able to eat in your seat. Take the time while you wait for the show to start to grab some snacks. My personal favorites are the candied nuts, popcorn, and Mickey pretzels. There is a snack stand in the rear of the amphitheater, near the bathrooms. Kick it up a notch by getting enough food to have dinner while you wait in line. Anything to fit in more rides, right?

Do you have any other tips or secrets about Fantasmic!? Let us know!