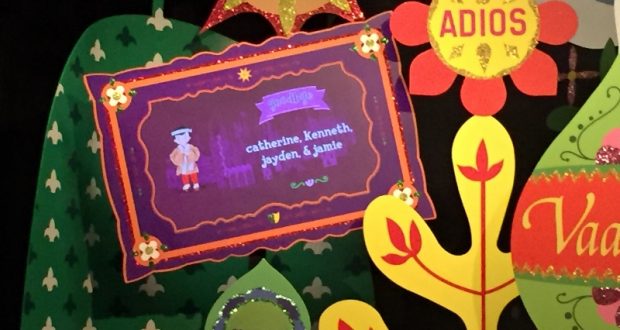 I know, many of you out there think “it’s a small world” is totally lame and “skippable” on your Walt Disney World vacation, but I am here to tell you that it is one of my favorite attractions and a must-do on every visit. Here are 7 things that are wonderful thing about “it’s a small world”:

“it’s a small world” is all about friendship and extending that feeling of hospitality and “we are all in this together” to your neighbors.  Why not demonstrate that as soon as you board the ride by waving not only to the cast member launching your boat in the booth overhead, but also to the people dining at Pinocchio’s Village Haus. Recently, they’ve gotten in on the fun with signs and other fun props at the tables by the windows to entertain riders on it’s a small world.  So go ahead, do the chicken dance, it’s cool trust me!

As part of the enhanced features with My Disney Experience and Magic Bands, your ride may end with a very cool personalized surprise.  I don’t want to give it completely away, but a google search will quickly reveal this fun ending.  Note that the feature doesn’t always work, and you do need to have a Magic Band to have a chance at seeing the surprise.  I just love the features that Disney has rolled out using this technology and I hope that they add more to attractions as they do routine refurbishments on them.

The beauty of “it’s a small world” is showing how similar all of us are across the world, but in the attraction I love the differentiation of the homelands for each group.  It is fun to go through and point out the various countries represented.  This article by Frank Jacobs features some great “maps” outlining exactly which countries and regions are represented. Study up and you can be the cool kid who can correctly identify every country along the way.

Aside from the backdrops representing the various countries and regions, the costumes worn by the dolls help define their location and groups represented.  The detailing on these doll-sized garments is really impressive including shoes, headwear and more. And so many embellishments on each one to keep them true to that culture.  The original costumes were designed for the opening of the attraction over 50 years ago by Disney Legend Alice Davis, and of course they have had to be refurbished and replaced over the years for wear & tear (both at Disneyland and Walt Disney World).  The recreations are faithful to the original, and Disney Parks Blog featured a video about how they are made to celebrate the attractions 50th anniversary in 2014 here.

While the clock at Walt Disney World is not quite as impressive as the original outdoor version at Disneyland, it is a treat to time your visit right to watch it at work. My favorite is when we are finishing up the ride just as it springs into action so we can watch it from the boat.  With its whimsical design by famous Imagineer Rolly Crump and smiling face, the clock makes you smile too.  When it strikes the time with the toy soldiers coming out it is really special (and cool).

I know many of you complain about that song getting stuck in your head after riding “it’s a small world” (try being a travel agent and being on hold with that in the loop for 5 hours) . . . but this piece written by Robert & Richard Sherman is a beautiful sentiment.  Whether played slowly as more of a ballad or with the upbeat cheerful tempo of the attraction, the words to it’s a small world resonate with everyone and have a lot of meaning in our world today.  I love the way different cultural music rhythms, instruments and tones are used to play the same melody throughout the attraction (I can’t decide on my favorite, but I really like the South Pacific drumming version).  And the song in native languages is great for the theming.  I will always love it’s a small world the song—no matter how pervasive of an earworm it is!

“it’s a small world” was one of Walt Disney contributions to the 1964 World’s Fair. At the fair it was part of the UNICEF pavilion that was sponsored by Pepsi. Due to some procrastination on the sponsor’s part WED Enterprises came up with the concept and executed construction on it’s a small world in only 11 months. After the fair it was reconstructed at Disneyland and has subsequently been recreated at Disney parks around the world . . . it truly is a small world. So many legends in Disney Imagineering worked on this project that it really contributes to the history of the attraction as a classic.  It is cool to ride the attraction and think of all of the hands that were involved in its design and how many families have enjoyed riding it together over the past 50+ years.

The coolest thing about “it’s a small world” is the design influence of Mary Blair.  Mary Blair was an American artist known for her work with the Disney Company, but also outside of it, most notably with Golden Books.  She worked on many projects with Disney and introduced her own style of color use and patterns that gave a bit of a modern feeling to what she influenced. For “it’s a small world” Blair’s style shows up in the overall whimsical design along with the colors and patterns used throughout.  Thinking about it’s a small world in a totally different way as an art museum of Mary Blair is a cool way to ride the attraction. Try riding it and paying close attention to the style, colors and design and appreciating the ride in a whole new way. Of course, I think any way you look at it, “it’s a small world” is a very cool attraction!

Do you love “it’s a small world”?  What do you think are the coolest parts?