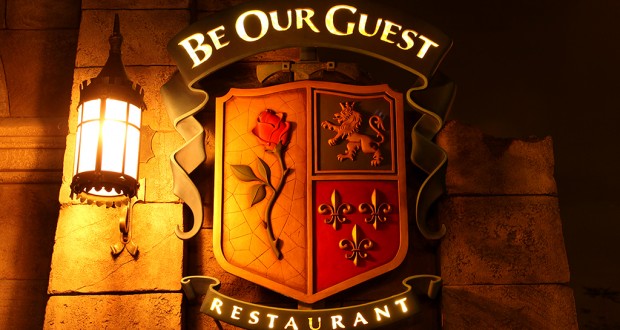 Be Our Guest Restaurant has been taking Magic Kingdom by storm since it opened in late 2012! It has been incredibly popular and rather difficult to score a reservation for dinner even though it’s been open for quite a while! When describing the experience with friends and family, I describe it as magical, but that doesn’t give enough information! So, here are 7 reasons I love Be Our Guest.

Something about dining in a castle is extremely appealing; Be Our Guest and Cinderella’s Royal Table are the only two restaurants at Disney World that allow you to do this. Part of the appeal is the feeling that you are actually in the movie, rubbing elbows with Cinderella and the Prince and Beauty and the Beast. It’s also popular and a hard reservation to get, so it is exciting when you feel like you are invited to a hard to go spot. But, more than anything: it’s special, cool, romantic and gorgeous and allows you to feel like you are a Prince or Princess, too!

I love that Be Our Guest is a quick service location for breakfast and lunch and then a table service for dinner. It allows you to experience Be Our Guest for less money during the breakfast and lunch hours, with an increase for dinner. I think Disney restaurants will continue this trend in other locations. It is also really, really cool that you can make a reservation for breakfast or lunch at a quick service spot and you can actually order your food in advance for those two meal periods, so your food is ready for you when you sit down! In 2018, Be Our Guest changed their dinner to a prix fixe, 3-course menu which replaced the À la carte dinner options. Still a great meal, but now dinner comes with one set price.

I am not a fan of having alcohol at Magic Kingdom, as it was against Walt Disney’s vision for the park, but I am also not vehemently against it. Be Our Guest serves wine and beer, though I’ve been told they limit each guest to 2. Imagineers have commented that beer and wine add to the experience of French food and that is why it is allowed. I agree and let’s face it…after a long day at Magic Kingdom, a glass or two of wine or beer is sometimes much needed!

A tough character to find around Disney World for photo ops, the Beast is part of the allure of having dinner at Be Our Guest. It’s his castle, after all! He’ll pose for pictures but doesn’t sign autographs. He is also out most of the dinner hours and is introduced with fanfare, as he wouldn’t want to miss out on meeting all of his guests! To see the Beast, though, you’ll have to come to dinner, as he is not available during the day.

You can eat in 3 different rooms at Be Our Guest: The Grand Ballroom, The Castle Gallery, and The West Wing. The beautiful mural and animated window which features snow will draw you to the Grand Ballroom, where Beauty and the Beast danced to their namesake song. In the Castle Gallery, you’ll love looking at pictures of Beauty and the Beast together and the incredibly beautiful and huge music box playing your favorite songs while Beauty and the Beast dance for you. My favorite room was the super dark, West Wing. In it, you’ll experience the thunderstorm, the Rose and ripping of the Prince’s painting by the Beast. You’ll even see a surprise if you keep your eyes on the painting. It’s so dark inside that servers need flashlights and it tends to be quieter than the other two rooms. I’m not sure little kids would love it, but my party of 2 asks for the West Wing every time. Of course, Disney tries to seat you where you ask for, but sometimes it is just better to ask for first available seating, as the dinner sit time is usually more than Disney projects it to be, frequently creating a wait even if you have a reservation.

The Rose deserves a special nod, as it is so impressive and it is the only item I have my heart truly set on seeing each time I go. Located in the West Wing, the Rose is a wonder; a true triumph of Disney Imagineers.   It is really hard to capture its essence, but I assure you that the Rose will amaze you. As it loses its petals, the “show” begins. And, we all know that if all the petals fall before the Beast can find true love, he’ll be cursed forever. Luckily, we know the last petal will never fall! Roses are also featured in the design of Be Our Guest, from the doors to the chairs and murals; see how many roses you can find throughout Beast’s castle.

I love that you can feel like you are part of the story, being able to order an item that Lumiere asks you to! The Grey Stuff is featured differently for lunch and dinner. The lunch dessert menu includes the Grey Stuff as a The Master’s Cupcake which is a chocolate sponge cake topped with Lumiere’s special “Grey Stuff”. The dinner dessert menu has “The Grey Stuff” which is a chocolate shell, cookie crème topped with Lumiere’s special “Grey Stuff”. I only have one thing to say about this… Try the Grey Stuff, it’s delicious! Don’t believe me, ask the dishes!