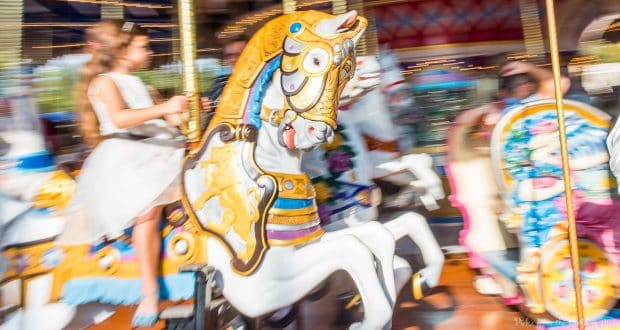 Magic Kingdom is full of splendor, surprise and magic. It is the pièce de résistance of the entire Walt Disney World resort! There are many hidden elements throughout Magic Kingdom that have been purposely placed by the Imagineers and some were the design of Walt Disney himself. If you do not take a moment to really search, many details can be overlooked! Here are my favorite “hidden” gems; I hope you have fun discovering them if you haven’t already!

While many know about this hidden gem, when was the last time you took a real good look at the windows? They pay respect to important contributors to the Walt Disney Company or to the park itself.  Of course, you can find Walt and his brother Roy and the rest of the Disney family and other legends like Marty Sklar and Ub Iwerks! From what I understand, there is still space for more! Upon retirement and with a career is considered to be of the highest service …and if you are willing to agree with your design, maybe one day your name could be up there!

If you enter the Chapeau store on Main Street and take a look at the wall to the right. Find the antique looking phone and pick up for some great gossip between a mom and daughter. I know that eavesdropping is not polite, but this is one adorable conversation!

5. Sounds and Smells of Main Street

To keep with the theme of overhearing some magic, find the windows on Main Street that are labeled “Singing Lessons” and “School of Dance” and wait for some sounds that prove that there are people singing and dancing up there! Also, part of the Disney magic is the smell of Main Street! During the hot months (which, let’s face it, it is Florida) you will smell vanilla in the air, though it smells like cookies to me! During the holiday season, peppermint is also pumped into the air. And, keep in mind that if the candy and popcorn smells really good, that is also partly artificial. It’s all part of the magic. Now, some cast members swear this is not still done today, but take a whiff and decide for yourself!

4. Lady and the Tramps Love print

Take a look outside of Tony’s Town Square restaurant and you’ll see the paw prints of the two love birds, well love dogs. My hubby and I put our hands over the print and took a picture that we have framed in our home. Call me sentimental, but this is a great hidden gem. There is also a beautiful fountain inside the restaurant of Lady and the Tramp.

On the right side of the castle as you approach from Fantasy Land, there is a gorgeous fountain with Cinderella appearing as she did before she became a princess and is accompanied, of course, by Jacques and GusGus. Behind her, there is a mural. Part of this magic is that if you kneel down and look up at Cinderella, it appears that she is wearing a crown. Imagineers did this for the children and what an amazing way to do so!

Well, it is Cinderella’s castle that is the iconic, focal point of Magic Kingdom, so it is only natural that there is more hidden magic for Cinderella! Go to Prince Charming Regal Carousel and find the only horse with a golden bow on its tail and you have found Cinderella’s horse! For great photo ops and for a little romance, couples can sit side by side because Cinderella’s Prince’s horse is always beside hers!

Years ago, Disney World removed a turnstile from the Haunted Mansion which left a pipe visible to the general public that oddly resembled an engagement ring. Enthusiasts and cast members started buzzing about Master Gracey throwing the ring from the balcony due to anger of his cheating would be bride. A more grisly tale tells of the young woman who jumped to her death, leaving the ring indentation upon her landing. When the area was paved over, fans cried out for their beloved story and in 2011, when the queue was redone, Imagineers put a proper diamond ring back in the pavement. It’s a little hard to spot, so don’t feel embarrassed to ask for help!

2014-09-27
Lauren Wallis
Previous: I Am Leaving For Disney, I Can’t Forget BLANK
Next: A Tour of The Villas at Disney’s Grand Floridian Tour – Disney Vacation Club