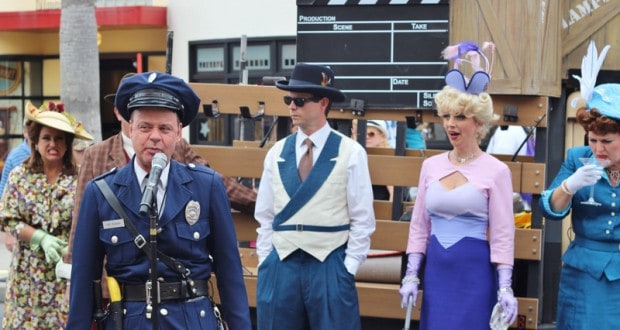 Lights, Camera, Action! You’ve just step foot into Disney’s Hollywood Studios. This park is home to the fabulous celebrities, classic music, and great entertainment. Here are a few of the hidden gems that make this park one to come back to again and again.

If your young padwan is between the ages of 4 and 12, they have the chance to participate in the Jedi Training Academy, a 20 minute class where they will learn how to fight like a real Jedi. In order to reserve your child’s spot for the class, you can sign them up at the ABC Sound Studio early in the day. They get a chance to fight the Dark Side with their “classmates” in the park! But listen to this bit of encouragement young padwans: may the force be with you.

This is no ordinary Walt Disney World street band. Mulch, Sweat & Shears is a one-of-a-kind band that will have you putting your hands together for more. Every day they perform covers of classic rock songs in front of the Sorcerer Hat. The band’s theme is landscaping, so if you see a truck driving around the park that looks like one for maintenance, you may just want to follow it to the show!

If you’re looking for a quiet getaway from the hustle and bustle of the glamorous Hollywood Studios, head over to the Writer’s Stop Bookstore. Here you can snuggle up with a good book and a nice, warm cup of coffee. While you’re at it, why not enjoy a pastry or two with it? I love coming to this “secret spot” and spending time looking through the Disney cookbooks and books about Walt Disney to take a break from the park.

This event is a one-night, annual event held at Disney’s Hollywood Studios park at the end of each summer. On this special night, Villains run amuck singing, dancing, and stirring up mischief throughout the park. For this separate admission cost event, guests can dress up as their favorite villain and party with the best of them, for a night sure to be a blast.

So many times park guests rush through the park trying to get in line for big-time rides like Toy Story Mania and Tower of Terror, making it easy to pass over some of the amazing entertainment Disney’s Hollywood Studios has to offer. Every morning, (check the times guide for specific times), various mini-shows are performed for guests on Sunset and Hollywood Boulevard. Although they’re always coming up with new ideas, a few shows I have seen include a bachelorette show, director and crew show, and more. Audience participation is allowed and encouraged, making Walt Disney World a perfect place to make priceless memories.

In between Pixar Place and the Animation Courtyard is a one-of-a-kind memoir to Walt Disney, the big man himself. The legacy Walt left behind is captured and displayed here in a timeline of his life, beginning to end. Drawings, early animations, vintage movie posters, and even Walt’s desk are on display for guests to see. To learn the story of the man who started it all, I definitely recommend taking a walk through One Man’s Dream.