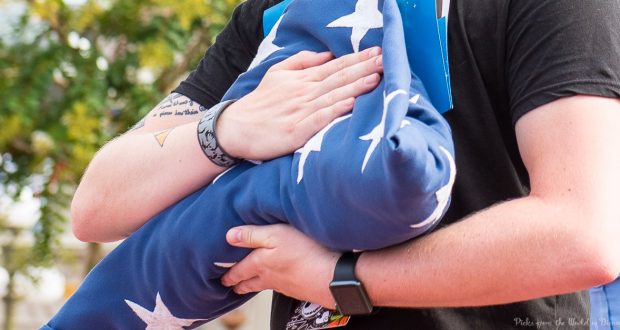 7 Facts You May Not Know About Main Street U.S.A. In Walt Disney World

Main Street U.S.A. was Walt’s way to recreate his beloved home town, Marceline, Missouri. The Disney family moved there when Walt was only four years old, and they only stayed there for four years before moving again, but it became the perfect home town in Walt’s mind and he carried those fond memories of Marceline with him throughout the rest of his life. This was also where Walt’s fondness of railroads developed, and why there is a Walt Disney World Railroad station here in Main Street U.S.A. Walt wanted his guests transformed back in time to the early 1900’s here on Main Street USA.

7. There is an abundance of Live Entertainment

Such as Citizens of Main Street who perform multiple times from morning to mid-afternoon daily. These hilarious 19th-century citizens interact with guests along Main Street U.S.A. with comical exchanges and sometimes are known to break out in song while mingling. There is a Main Street Trolley Show that is 20 minutes long, appearing multiple times between park opening and noon. These are citizens that board the horse-drawn trolley car and then pour out onto the street to welcome you to Magic Kingdom. They sing and dance then reboard the trolley traveling to a different section of Main Street U.S.A. They travel as far as Cinderella Castle where they perform and turn around to head back down Main Street. They are very talented performers and present an enjoyable, happy, show. It is a wonderful welcome to Magic Kingdom. Main Street Philharmonic is a band of horn players that march and play popular tunes from Disney movies, swing music and even some ragtime. They are dressed in classic marching band uniforms. They perform a couple of times in the afternoon, so check your Times Guide to make sure you don’t miss them.

The Dapper Dans are a very talented barbershop quartet that appears several times during the day. They not only sign well a Capella, they tap dance, play Deagan Organ Chimes, and use vaudeville humor to entertain the whole family. Their shows are about 20 minutes long and provide real entertainment when sitting along Main Street waiting for the 3 o’clock Festival of Fantasy parade to come through. They sing songs like “Cruella de Vil”, “Yankee Doodle Dandy”, “Somebody Stole My Gal”, “Mr. Sandman”, “If You’re Happy and You Know It” and “Zip –a-Dee Doo Dah”. During Mickey’s Not So Scary Halloween Party the Dapper Dans get transformed from their colorful pin-striped outfits with straw hats into “The Cadaver Dans” in ghostly makeup performing in Frontierland. Casey’s Corner quick-service location also has a Pianist performing. Check the Time Guide for all the show times. Did you know about Harmony Barber Shop located in the corner of Town Square? Children can get a haircut for $18 (age 9 and under), and adults for $19. There is a special First Haircut package ($25) that comes with a certificate and special commemorative Mickey Ears. The Barbers are not only experience stylists they also entertain with props, songs, and are sometimes joined by the Dapper Dans. Guests are asked to come with clean, dry hair as they do not do shampooing. Guests under 17 years of age must be accompanied by an adult, which is someone 18 years of age or older. Reservations are recommended. Walk-ins are also welcome.

There are so many eating establishments that are a part of Main Street U.S.A. The first would be Tony’s Town Square Restaurant, then the Main Street Bakery and Confectionary, Casey’s Corner, The Plaza Ice Cream Parlor, The Plaza Restaurant, and The Crystal Palace. You can have all of your merchandise purchases taken to the Chamber of Commerce in Town Square where you can pick them up at the end of the day. If you are a Disney resort guest staying at least two more days you can have those purchases shipped to the gift shop of your resort where you can pick them up the following day. If you choose to, you can also have your purchases packed and shipped directly to your home address. Lost & Found is located at City Hall where you will also find Guest Relations.

This is a moving ceremony performed each day at 5PM to take down the official USA flag from the flagpole that stands in the center of Town Square. A special guest, a Veteran, is selected to participate in this ceremony. The Dapper Dans are there to share a patriotic song, the flag is lowered, folded, and presented to the Veteran of the day.

You may be drawn down Main Street U.S.A. by Cinderella Castle and not necessarily notice there are Disney character meet and greets right at the front of the park. You can meet Mickey in his Magician outfit at Town Square Theater. Tinker Bell is also located in this position. Seasonally there may be characters appearing in the Rose Garden that is between City Hall and the Chamber of Commerce. 1. The Main Street U.S.A. windows –Take the time to look up, to the levels above the street and take note of some of the names painted up there. If you pause under the sign indicating Piano Lessons you may be able to hear the keys being played, or singing lessons taking place. Walt wanted you to be engaged in the idea that this is a living town. He purposely made the sidewalk level shop windows lower so that children could look in the windows too. He wanted children to experience every aspect of the park. You may have caught on to Walt’s idea of recreating the theater where his films have been so successful, into the park opening. You enter at the ticket taker, walk under the railroad station, just as you would enter into a movie theater, the first thing you see coming out of the tunnel are snack carts that serve as the refreshment stand, like in the theaters.

You are now in the park and all the employees are Cast Members who are there to tell the “story”. Walt had the ability to thank people in the credits of his films, and being the clever man that he was, he figured out how to thank people who helped build his dream, the park, by putting their names on the windows above Main Street. Look up at the Train Station where you see a window above and center for Walter E. Disney, he is listed as the Chief Engineer, who keeps “the dreams on track”. Walt’s brother Roy who had been with him from the beginning of the studios had planned on retiring, but then Walt passed away and Roy realized his brother’s dream for this “Florida Project” would not happen if he did not stay.

Roy pushed himself to see this project through, ultimately changing the name to Walt Disney World, to keep his brother’s name and dream alive. Roy O. Disney’s window is adjacent to two similar sized windows one that says “Dreamers and Doers” which is very fitting to Roy. To honor his father a window for Elias Disney “Contractor” due to his willingness to do all kinds of odd jobs over the years to provide for his family and a nod to a failed contract business Elias made an attempt at in Chicago, 1895. Roy actually has another trio of windows that say “Sail Maker” and “Sailing Lessons” the center window has “Roy O. Disney-The Gentlemanly Sport of Racing at Sea” because Roy loved competitive sailing. Can you spot “M. T .Lott Co., Real Estate Investments” (snicker) “Donn Tatum” who was the first president and chairman of the board for Walt Disney Productions and the first president of Walt Disney World. Another humorous one is “Pseudonym Real Estate Development Company” with one of the names listed being “Roy Davis” which is the pseudonym Walt gave his brother Roy when he met with real estate agents when looking in Florida for land for Walt Disney World. “General Joe’s Building Permits” is in honor of Walt’s first Florida Project Disney employee Major General William ‘Joe’ Potter who would oversee the changing of 300 acres into Magic Kingdom.

That sign for the music school I hinted at earlier, is the “Plaza School of Music, B. Baker, B. Jackman, G. Bruns” These men composed some of the most popular songs for the Disney movies and Disney parks, such as “Grim Grinning Ghosts” for Haunted Mansion, and “Yo Ho(A Pirates Life for Me)” for Pirates of the Caribbean. There is another window honoring Walt’s original Costuming Department, a former president and COO, and appropriately there is another window for Walt Disney that faces Cinderella Castle and the rest of his dream park. If you would like to know more about the windows, there are many more than I mentioned, you can purchase a Disney published book entitled “Windows on Main Street”, published in 2009 and is available at Amazon.com. It contains the story behind the windows in both Disneyland where there are 63 windows and the 86 at Walt Disney World.

If you want to know more about Marceline and Walt’s inspirations you may want to take the Walt Disney: Marceline to Magic Kingdom Tour. It is intended for teens (who must be accompanied by an adult) and adults. (407)WDW-TOUR for reservations. It begins at 8:15AM in the Magic Kingdom. That early start time means you gain entrance to the park before other guests. You get some special photo ops on Main Street that you can’t get any other time of the day.

2014-08-25
Cassie
Previous: 7 Awesome Tips For A Last Minute Trip To Walt Disney World
Next: Top 7 Places to Get Coffee in WDW