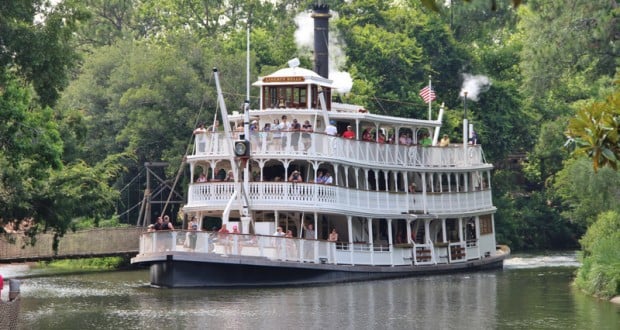 1. The Liberty Belle Riverboat actually is steam-powered: it really is powered by the boiler, pistons and steam engine found on the lower deck. The steam powers the paddle-wheel which enables the river boat to move, forward or backward if necessary. “When they say Full Steam Ahead!” they mean it! You will hear the boat Captain, Horace Bixby, make announcements prior to leaving the dock. Bixby actually was a steamboat captain that sailed often with Mark Twain on the Mississippi. The Liberty Belle is 113-feet long, 25-feet wide and 44-feet tall and weighs 100 tons. The lights on the boat are also powered by the steam engine.

2. You will marvel at the beautiful design details on this ship. The wood decks and railings are just beautiful. There are four decks which include the top deck which holds the Pilothouse where the boat Pilot “steers” the boat from his wheelhouse and his quarters, which are private. The Pilot is also responsible for watching other vessels on the river, such as the rafts that take guests over to Tom Sawyer’s Island. He uses a whistle and horn to signal their location. Then we have the Texas Deck (or Sun Deck) where you will have a sunny journey, or a wet one if it is raining as it is mostly open.

The Promenade Deck holds what is known as a Salon, a room with photos and maps from the time period of the boat, which is open for guests to visit. The Salon has a few padded benches if you prefer to sit rather than explore the boat. The lower deck is referred to as the Main Deck and that is where you will find the boiler, steam engines and engineer as well as the paddlewheel. The engineer is who controls both the direction of the ship, both the forward and reverse directions, and the speed with which it moves. Feel free to wander among the lower three levels, there are staircases on both sides of the ship.  There is limited seating on the Main Deck and also in the Salon. Do not sit on the stairs or the railings. Parents, especially be careful to not sit your children on the rails.

3. This is the longest boat ride in Magic Kingdom. You will embark on a 17-20 minute, half-mile journey around Tom Sawyer Island, gliding along the Rivers of America. The boat holds up to 450 people at a time. It is the ride that many groups like to enjoy together. Dapper Day is one of the groups that fills up the boat and they create a beautiful historical-look once a year. This attraction is open to all ages and has no height restrictions. It departs on the hour and half-hour. It does not run during the fireworks. Also remember if there is dangerous weather in the area it will close as it is an outside ride. The queue is large and covered. The riverboat goes slow enough that you can get some of your best photos of Magic Kingdom. Riding at night, with the running lights on, is a special treat. Children may get bored and would rather play on Tom Sawyer’s Island rather than go on a slow ride around it. There are no bathrooms on board so make sure to visit one before entering the queue for this attraction. No strollers are allowed on board, but ECV’s/Wheelchairs may board on the lower level. Food and drinks are permitted on board.

4. The boat has a history. It is actually a working replica of the original which is over a century old. That original vessel would have been used to transport people along the Mississippi River. The name of it was changed in 1996 to the Liberty Belle. It was formerly known as the Richard Irvine. The Irvine sternwheeler began service May 20, 1973 and was named after the former VP, Director of Design for WED. Along with the name change in 1996 the vessel was stripped down to its hull, boiler, steam engine and the rest was rebuilt by Walt Disney World Central Shops. If you visit around the 4th of July you will see her decorated with patriotic banners. If you rode across the lake to Magic Kingdom one of the ferries you may have crossed on could have been the Joe Fowler or Richard Irvine.

5. This boat takes you on a historical journey.  Moving from Liberty Square you begin your journey past historical style buildings from the Colonial American design pushing into the Frontier just as early Americans may have done. Along the way you pass a settlement reminiscent of early America, animals in the woods that early settlers would have made good use of, then a Native American tent settlement and burial site. You have nice views of Harper’s Mill and Fort Langhorn and of course attractions in Frontierland such as Country Bear Jamboree, Splash Mountain, Big Thunder Mountain and then Haunted Mansion as you pull back into dock at Liberty Square. As you enjoy your journey you will have a narration of sorts telling the story of adventure and the role transportation played in discovery of early America. The narrator is the voice of an actor portraying Mark Twain. Put yourself in the early 1800’s on this quiet ride in the midst of activity, it will refresh you!

6. Walt loved these boats. When the money for putting this attraction in Disneyland dried up, Walt paid for it out of his own pocket. It was the first functional riverboat to be built in the United States since 1900. It opened with Disneyland in 1955. He and Lillian took it on its first voyage with invited guests as they celebrated their 30th wedding anniversary. It is easy to fall in love with this riverboat experience, just as Walt Disney himself.

7. There was another boat. Magic Kingdom was also home to the Admiral Joe Fowler which had a sidewheel and it was named after a man who served as a construction supervisor for Disneyland. It was in the park from October 2, 1971 until Fall, 1980. The vessel sustained unrepairable damage when it fell from the crane attempting to put it onto the dry dock for refurbishment. It operated for less than 10 years which is a very short time period compared to the other riverboats in Disney parks around the world. The steam engine was shipped to Tokyo Disneyland and the bell was put on Roy O. Disney’s WDW Railroad engine.

There, sadly, is not park merchandise based on this attraction. The shop that used to feature Hall of Presidents merchandise, Heritage House, has been closed. There are some quaint shops in the colonial buildings: Ye Olde Christmas Shop offers hundreds of Disney Christmas Ornaments and decorations. There is an outdoor areas for personalized umbrellas, Liberty Square Portrait Gallery offers caricatures and silhouettes. The Yankee Trader was redesigned an reopened as Memento Mori: Relics from Regions Beyond, a Haunted Mansion themed shop offering new HM merchandise of all kinds.

The only character in the area is Tiana in the garden area just beyond Ye Olde Christmas Shoppe. There is also a location to enlist in the Sorcerers’ of the Magic Kingdom interactive game.

The nearest restrooms are located in the breezeway by the Diamond Horseshoe toward Frontierland and toward Fantasyland is the Rapunzel bathroom, just beyond the Haunted Mansion. 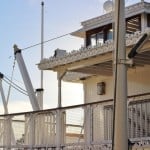 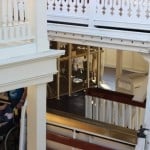 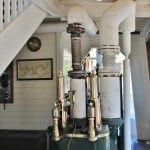 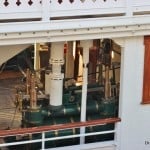 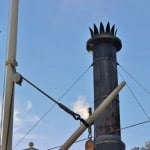 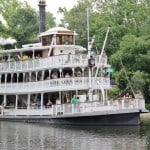 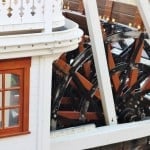 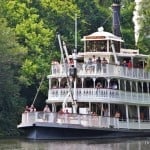 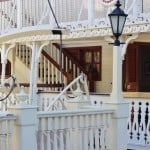 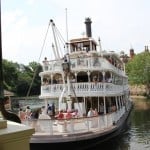 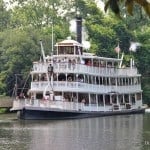 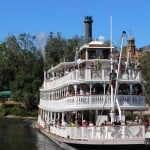 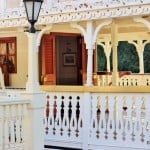 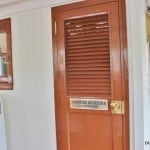 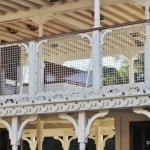 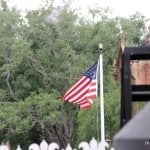 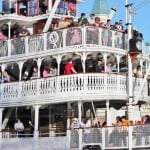