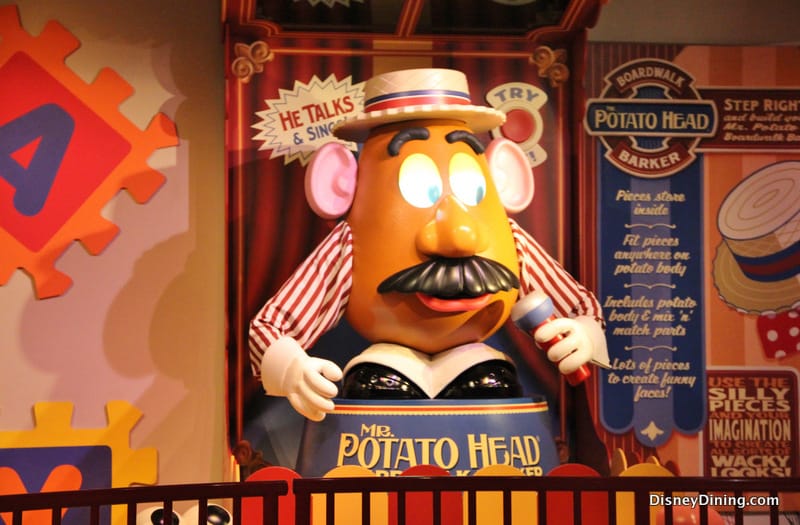 This is a challenging list to create. There are SO many truly great attractions at Walt Disney World! After much discussion, my family and I finally came into agreement on this short list of must-have FastPass+ selections. Once you have been to Walt Disney World, and see the lay of the land, and begin to experience all the magic here, you will find yourself favoring certain attractions over others and you will know which ones you want FP+ for. But, if this is your first time coming, and the whole FastPass+ is a complete mystery to you, you will want to consider the following list. Keep in mind the ages and height of the people in your party as you consider your FP+ selections.

6. Seven Dwarfs Mine Train in New Fantasyland at Magic Kingdom

Due to the uniqueness of this ride, it’s charming attention to detail, and it is new, this should be at the top of your list of Fast. Pass+. Although the ride queue is one of the best with interactive games both inside and outside, it is still too long a wait. If you cannot get a FP+ go first thing after park opening, or during a parade for a shorter wait. The ride vehicle is a train of barrels, built by the dwarfs, for moving gems out of the mountain. Each section holds two people, side by side, and it swings, side to side, as it makes its way over and through the mountain. It was designed to be a family ride, rather than a thrill ride. Height requirement: 38”

You really need to have your favorite “mountain”, so if Space is not your favorite of the Magic Kingdom mountains(Splash Mountain, Big Thunder Mountain Railroad, Space Mountain, and Seven Dwarf’s Mine Train) , choose your top one. Splash Mountain and Big Thunder Mountain have extremely low wait times during the afternoon parade. Space Mountain could be enjoyed without a FastPass+ if you are a Disney resort guest with morning extra-magic hours and you are there for that early opening at Magic Kingdom. Expedition Everest is the other Disney “mountain”, which is found in Disney’s Animal Kingdom. You can enjoy little to no wait times in its Single Rider Line. (Single Rider lines exist at EE, and Rock ‘n’ Roller Coaster, Test Track so having a FastPass+ for them is not a must.) Ride Tower of Terror first thing in the morning, or late at night. Height Requirement: 44”

This not-to-be-missed attraction is different every time, because the animal interaction is unpredictable and unrehearsed. It covers 100 acres and you will see about 34 different species on your “two week” journey. Enjoy seeing the wild animals on the Harambe Reserve without a fence in view. Some of the animals tend to get in the roadway, stopping the movement of several safari vehicles. There are often baby animals that can be seen along with the adults. You may learn a lot about animals and their habitats along the way. Another reason it is always different is the safari drivers tell different information, depending on what is occurring along the route. Some are better than others at spying the animals that are really very good at hiding, like the large cats. DINOSAUR is also a great choice for a FP+ at Animal Kingdom. No height requirement for Kilimanjaro Safaris.

3. Soarin’ inside the Living with the Land pavilion of Future World, Epcot

This attraction is one of Epcot’s hardest FP+ to get and the line is usually very long. They do have an interactive queue that is very entertaining for large groups of people to experience together making it more tolerable. Soarin’ takes you on a hang-gliders view over California’s vast lands, even injecting in smells such as citrus while flying over large orchards. Filming was completed in 2014 to transform the scenery to be specific to the state/park you are in. A Walt Disney World version is expected to debut in a much needed doubling of the size to better handle the large crowds that flock to it. Height Requirement: 40”

Who can resist a game that is a ride, a ride that is a game? No body I know! I agree that the queue for this attraction is incredibly cute and fun to look at as you move, slowly, through it. Having Mr. Potato Head talking to you and telling you jokes is pretty fun. I always try to get there for park opening and go through Stand By before it gets to be a 90-minute + line for the rest of the day, and if I am lucky enough to get a FP+ for it I enjoy it a second time. Then you can try to beat your score in the same day. You board ride vehicles, two in the front, two on the other side. You don your stylish 3-D glasses, grab your cannons and you are spun around to a practice screen where you do target practice to get the feel of the cannons and how they work. It is a carnival theme so the games are similar to what you would find in the cheesy games at the fair. Your cannons shoot a variety of items, such as rubber balls, darts, rings, pies, etc. at targets to get a higher score. The games have Toy Story characters in them to add to the appeal. Don’t miss the moving targets and those closest to you may have higher points than the ones in the middle. At the end you see your score, your accuracy at hitting targets, and then compare it to the high score for your vehicle, other guests within the hour, or for that entire day. It really is a blast! There is no height requirement.

1. A Meet & Greet of your choice, but with a special nod to Anna & Elsa at Princess Fairy Tale Hall, Fantasyland, Magic Kingdom

Seeing as how the royal sisters from Frozen have commanded audiences willing to wait in several hours long lines, Disney moved them to Princess Fairy Tale Hall in order to give out FastPass+ and limit the length they will allow for the Stand By line. Judging by the number of little girls in Frozen dresses in the parks, they are still as popular as ever. Choose which character(s) is/are most important to you for your FastPass+. If you do not care about a meet and greet, or you are dining with your favorite characters at a meal, you may want to choose a FP+ viewing of a parade or fireworks show. To not have to stand in the hot sun waiting hours for a parade, having a FP+ for it becomes extremely attractive. You will have a special viewing area that you enter minutes before a parade. I know parents who say they will never watch a parade any other way but FP+ now.