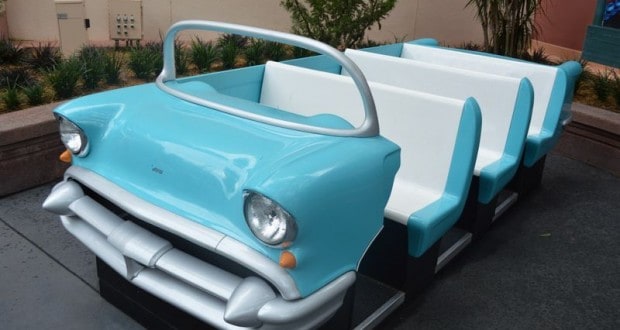 I love eating my way around Disney World and there is nothing I love more than a wonderful meal in an awesomely themed restaurant. When I go to Disney World, part of the fun of being there is that I can feel like I am in a totally different world, an escape from reality! So, when I am able to go into these delightfully themed restaurants it adds so much to the magic! Sci-Fi Dine-In is a true gem at Disney’s Hollywood Studios! Opened in 1991, Sci-Fi is one of five table service restaurants at Hollywood Studios and is often considered the most popular restaurant in the park. It has certainly been one of my family’s favorite spots over the years and here are 5 reasons you will also love the Sci-Fi Dine-In Theater Restaurant!

You knew that was going to be #1! After the booming popularity of the 50’s Prime Time Café, Imagineers decided to create another restaurant with a focus on the theme. When you enter the “box office”, which is the front door, you’ll then enter the “sound stage” where you’ll see convertibles that actually are the tables! There are stars in the sky and giant movie screens showing B rated Sci-Fi movie clips and coming attractions. There is a snack bar in the back, reminiscent of the experience of a 1950’s Drive In Theater. Each convertible can accommodate parties of 4, sometimes 6, and there are picnic tables for larger parties. There is a sky scape all around to really make you feel like you are there, enjoying a drive in movie on your first date!

4. The Movie Clips and Coming Attractions

You might actually have a cell phone and tablet free experience at the Sci-Fi because there is so much to watch on the screens! You’ll see clips and attractions from films like The Blob, Cat-Women of the Moon, Teenagers from Outer Space and Attack of the 50 Foot Woman to name just a few! You’ll also see some great animated cartoons, silly newsreels and monster movie clips! This is such a unique experience and will definitely have the kids asking questions about the good ‘ol days.

Star Wars Weekends are a HUGE hit for the park and we have been hearing rumors for years that the Star Wars presence at the Studios will be greatly expanded. The addition of the Star Ward breakfast at Sci-Fi was met with extreme enthusiasm by Star Wars Fans. The breakfast starts with a photo op with Darth Vader and Boba Fett. Inside, the movie screens have clips from Star Wars the movies and the cartoons, along with special musical appearances. Circulating while you eat are Storm Troopers, Jawas and Greedo. The menu features playful takes on Star Wars themed foods, including the chance to try Blue Milk from Tatooine. Star Wars fans are flocking and it is a hard reservation to get, but if you have a diehard Star Wars fan in your family, you can equate this experience to a child’s first meet and greet with Mickey!

This is my nephew’s absolute favorite part of eating at the Sci-Fi! At 5 years old, he very rarely gets to sit behind his parents and eat dinner in a car! Although it provides a slightly awkward conversation, with the people in the front seat having to turn to talk behind them, it is so true to the theming and it’s fun! Parties of two sometimes split a car and if you have a very friendly date, like I always do, you’ll have fun getting to know some strangers while you laugh at campy clips playing on the screens while you sit under the stars.

With the exception of the Star Wars breakfast, which was $47.99 for adults last year, the cost of eating here is actually quite reasonable as compared to most Disney locations. Entrees begin at $13.99 and go up to $31.99, but that is only for the NY strip. Appetizers range from $8-$11 and desserts from $6-$8 and the Disney Dining Plan is accepted for one table service meal. I’ve also heard from many friends that a must try treat is the Sci-Fi Popcorn Treat, which is described as popcorn soup with buffalo popcorn chicken and celery. It is on my list for my next visit!

2015-08-10
Lauren Wallis
Previous: 5 Things You Will Love About Les Halles Boulangerie-Patisserie
Next: 7 Things You Are Going To Love About Art Of Animation At Walt Disney World