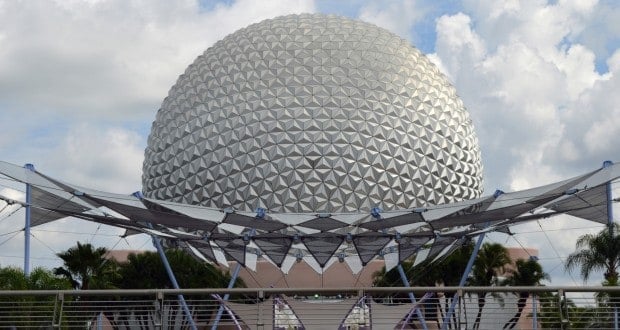 Since it’s opening in 1982, Epcot has housed Future World as well as the World Showcase. It’s a wonderful integration of technology and culture as they both come together to create a unique experience for all guests, young and old. Much like the other parks at Walt Disney World, Epcot also houses it’s fair share of secrets and mind-blowing facts. Some secrets seem obvious, while others may catch you by surprise. Here is our list of 5 secrets hidden within Epcot:

Starting with the iconic Spaceship Earth, there are a few things that Disney trivia buffs will boast about knowing. It is the largest free-standing geodesic sphere in the world, standing at 180 feet tall. Six pylons support the sphere, which weighs almost 16 million pounds (8 thousand tons). In order to support that much weight, the pylons are driven about 120 feet into the ground.

Spaceship Earth is covered by 11,324 isosceles triangles made of alucabond (a carbon/aluminum compound) which form the outer shell. Speaking of which, the structure actually contains two spheres – the outer shell that we see, and a smaller sphere, sitting two feet inside the outer sphere, which houses the ride. Without a system in place, guests standing underneath Spaceship Earth would be drenched. Instead, rain is collected through a series of gutters that redirect the water to replenish the World Showcase Lagoon.

Premiering in October 1999, Illuminations has been running nightly over the World Showcase Lagoon. Torches were installed to celebrate the centuries past. 19 torches sit around the perimeter of the lagoon with the 20th torch revealed in the globe. The 21st century isn’t represented by a torch, but by the blaze of bright white fireworks. Countries around the World Showcase all light up with roughly 5 miles of white lights outlining the structures. The only exception to that is temple in Morocco, which is not lit out of respect for local religious beliefs.

The control booth for Illuminations is located at the top of the Mexico pavilion, which communicates with each barge and directs the show. The second largest barge in the show is the Inferno Barge, which weighs 150,000 pounds and sends balls of fire 40-60 feet in the air using about 400 gallons of liquid propane every night. The largest barge is the Earth Globe, weighing 175 tons, and houses the world’s first spherical LED display (15,000 LEDs). Illuminations goes through 1,105 fireworks in the 13 minute run time.

Future World holds some of the most unique secrets at Epcot. While many guests know about the elaborate underground Utilidors that go under the Magic Kingdom, they may be surprised to learn that Epcot also has it’s own Utilidors. While the ones at Epcot are not as extensive, there is a large U-shaped tunnel that runs from Innoventions East to Innoventions West, curving under Spaceship Earth. Just inside the Electric Umbrella restaurant, be on the look-out for the talking trash can as you open it up, you’ll hear a voice (or a series of voices) talking about your trash. In the heart of Future World is the Fountain of Nations, which runs every 15 minutes. The largest jets can propel the water 150 feet in the air, just 30 feet shy of the top of Spaceship Earth. When all of the jets fire at the same time, there are 2,000 gallons of water in the air.

Designed to feel like a permanent “World’s Fair” the World Showcase has 11 different pavilions with space for up to 9 more countries to be developed. Many of the buildings in the pavilions use forced perspective to make them appear larger or smaller than they really are. In the American pavilion, a typical colonial house would only have been 2 stories, which would have been too small to be seen from across the World Showcase Lagoon. To achieve the proper size and keep the look of the time period, Imagineers constructed a 5 story building and put 2 stories of windows and doors (albeit large windows and doors) to maintain the illusion. On the other side of the scale, the Canadian pavilion has a 3 story building with 5 stories of windows to make it appear larger. The same technique is used for the Eiffel Tower in the France pavilion. It is larger at the bottom and gets smaller the higher it goes. If a bird were to land on the top, it would look enormous in comparison.

Hidden in the Germany pavilion is a hollow wall, which originally would have housed a ride similar to the Gran Fiesta Tour in Mexico. This boat ride would have taken you on a tour along the Rhine River, seeing sights of the German countryside. While the attraction was never built, the building is still there and was designed to look like a stone castle sitting next to the Biergarten Restaurant.

There are hidden secrets in many of the rides and attractions at Epcot throughout Future World and the World Showcase. The flight number of Soarin’ (5505) coincides with the date it opened, May 5, 2005. While Test Track doesn’t seem that large, it is both the longest and fastest ride at Walt Disney World, reaching a top speed of 65 mph while traveling almost a full mile. Each vehicle is has three onboard computers, which control the six braking systems and the 22 wheels used to keep the car on track (despite there only being four visible wheels).

The Seas aquarium is one of the largest saltwater tanks in the world. It is so large that Spaceship Earth could easily sit in it and the water in the tank could fill the sphere and still overflow. The American Adventure attraction takes you up to the theaters second-floor entrance only to bring you back down once you are inside. That’s because the audio animatronic figures in the show are on an automated steel framework that sits underneath the audience. Each scene is brought out from under the seats and then lifted vertically into view using hydraulic lifts. And finally, Aboard Mission:Space, every guest is given a set of instructions and will be asked to perform certain tasks at certain times in the ride. While each guest only has 2 main buttons to press, there are tons of other buttons and switches that are extremely tempting to try, but be forewarned, if you try to press them all, Mission Control (Gary Sinise) will tell you to cut it out.

Which secret at Epcot is your favorite? Is there one we missed? Let us know in the comments!