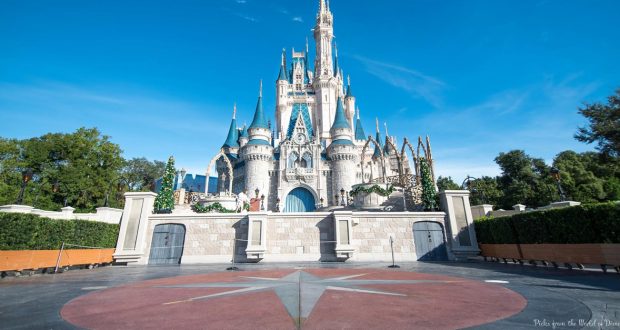 There are six main themed areas or lands that make up Magic Kingdom. They are Main Street USA, Adventureland, Frontierland, Liberty Square, Fantasyland and Tomorrowland. Each area has distinct theming with it’s own attractions, music, food and stories.

Main Street takes you back to the carefree days of an idealistic American town (inspired by Walt’s hometown of Marceline, Missouri) circa the turn of the 20th century, complete with City Hall and an ice cream parlor. The Jungle Cruise in Adventureland takes you on a boat tour along the world’s largest rivers and through jungles filled with exotic and dangerous animals, while Pirates of the Caribbean puts you right in the middle of the pirates’ mischievous exploits. In Frontierland you can hop in a log and float through Splash Mountain in search of Brer Rabbit’s laughing place all the while climbing higher and higher to that big fateful drop. Over in Liberty Square is the Haunted Mansion, complete with doombuggies and hitchhiking ghosts. Fantasyland brings fairytales to life at the Beast’s Castle where you can dine in the West Wing and try the Grey Stuff (it’s delicious). In Tomorrowland you can catch a glimpse of a different galaxy while riding Space Mountain, or sit back and relax on the Peoplemover.

No detail has escaped the Imagineers in each area, so take the time to listen to the soundscapes of each land, to smell the smells and take in your all of your surroundings because all of those small and seemingly simple details carry you deep into the story of each land and whisk you into the next.

The dining is wonderful everywhere on Disney property, but there’s something extra special about dining at Magic Kingdom. Magic Kingdom offers a number of dining experiences that put you right into a Disney movie or classic short. Casey’s Corner is a quick-service restaurant that takes the short Casey At the Bat and pairs it with our favorite things to eat at America’s favorite pass-time, like hot dogs, corn dogs and cracker jacks. There are other quick-service spots taken right out of Disney’s filmography. Pecos Bill’s Tall Tale Café in Frontierland has that same Old West feel as the short, and the quick-service counter spot Sleepy Hollow Refreshments features funnel cakes and waffles. But if you really want to feel immersed in the movies, you can feast on spaghetti like Lady and Tramp did over at Tony’s Town Square, or dine like royalty with Disney Princesses at Cinderella’s Royal Table. At the Be Our Guest restaurant in the Beast’s Castle, you can meet your host for the evening and dine in the ballroom as a light snow falls outside the window. The first restaurant themed after a ride is Jungle Navigation Co. Ltd. Skipper Canteen which is hilariously themed after the Jungle Cruise. The restaurants at Magic Kingdom offer the ultimate Disney dining experience with a little more pixie dust than you may find at some of the other parks.

The rides here are the best! There are also a lot of them, too many to do all in one day or possibly even two! The iconic Disney attractions are found here at Magic Kingdom, like Splash Mountain, The Jungle Cruise, Space Mountain, Peter Pan’s Flight, Big Thunder Mountain Railroad, Seven Dwarfs Mine Train, the Haunted Mansion, Pirates of the Caribbean and the list goes on. If you want a day full of fun and adventure, this is THE park to visit. There are a ton of classic rides that will appeal to the nostalgic Disney fan, thrill rides for those seeking excitement, and slow/dark rides that will suit the whole family. The best part about each ride is the story they tell and Disney starts that story as soon as you enter the queue. So don’t wait until you’re boarding the ride vehicle to start enjoying the attraction, or you might miss out on something special!

As you walk down Main Street and come upon the castle, you’ll see the famous Partners statue. It would be difficult to see the statue of Walt and Mickey Mouse and not stop to think of the man who started it all – the man that Roy Disney dedicated Disney World to.

Walt Disney’s legacy can be seen in so many of the attractions, new and old, in the Magic Kingdom. It’s a Small World and The Carousel of Progress in Magic Kingdom are versions of the attractions Walt created for the 1964/65 New York World’s Fair. The Hall of Presidents not only displays his patriotism and admiration for President Lincoln, but also his accomplishments in Audio-Animatronics. Walt’s passion for space and technological advancement is apparent throughout Tomorrowland in each attraction as well as the architectural theming. As Magic Kingdom changes and grows, you can see Dream Builder signs across the park with Walt’s words on them, showing that he continues to inspire new ideas and imagination in the Magic Kingdom. It’s truly amazing to be in the park and see what one man made possible.

Cinderella Castle is the iconic Disney image. It’s impossible to ignore as you stroll down Main Street, getting closer and closer. The castle is the embodiment of the magic and dreams that Disney has come to represent for so many. Dining at Cinderella’s Royal Table makes you feel as if you really are in a fairytale, if only for an hour. The castle represents the impossible as Tinker Bell flies overhead from the turrets each night. It magically transforms as our favorite Disney movies and characters are projected onto I, and then finally it becomes the perfect background for Wishes as fireworks explode above for a truly magical end to a perfect day at Magic Kingdom.

A picture in front of Cinderella Castle is a must because it’s proof that you truly are in the happiest place on earth. It may sound cheesy, but if you’ve been to Magic Kingdom and seen the castle than you know it’s true and you know the feelings it evokes – pure and simple magic!