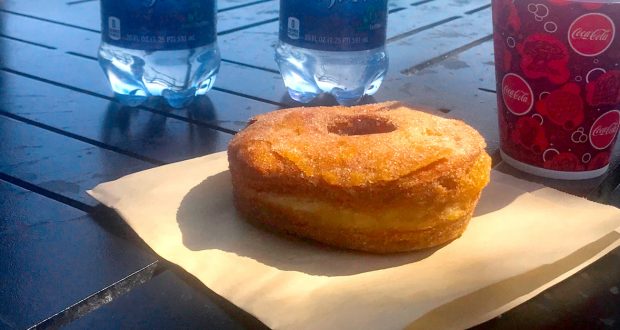 Walt Disney World is famous for many foods, including Dole Whips, Turkey Legs, and Mickey Ice Cream Bars. On the contrary, dining at Walt Disney World is not bland at all and is, in fact, home to many unique culinary offerings such as the Buffalo Chicken Waffle sandwich, many varieties of cous cous, or a banana filled chocolate cupcake. With that being said, here are six of the most unusual foods you can try at Walt Disney World.

Many visitors to Walt Disney World do not know that they can sample a cronut as they travel around the World Showcase in Epcot. Located at the Refreshment Port as you turn toward the Canada pavilion from the center bridge out of FutureWorld, the Cronut, or croissant doughnut as it must be called to protect from copyright infringement, is a culinary delight that shouldn’t be missed. Doughnut batter is expertly layered in such a way to resemble the flaky texture of a croissant and then deep fried while you wait. The cronut is then rolled in cinnamon sugar and served hot. This treat is large enough to share, but you probably won’t want to after your first bite.

Sleepy Hollow Refreshments, located in the shadow of Cinderella Castle in Liberty Square, is home to some unusual food items but many do not know it is where you can get a Sweet and Spicy Chicken Waffle Sandwich. The waffle is made to order so it is warm when it is served. The sweet and spicy combo is to die for! Don’t forget your fork and knife, because you’ll need them!

The fact that you could get Chinese take-out during a trip to Walt Disney World is certainly unusual. Generally, I would point you in the direction of a more interesting meal, but the Chinese take-out offered at Yak and Yeti Local Foods Café in the Asia are of Animal Kingdom is too unique of an option to pass up. Entrées are served with fluffy, steamed white rice and the same sauces found at your local take-out joint. Even though they no longer give you a fortune cookie to end your meal, Yak and Yeti Local Foods Café and its unusual Chinese take-out is a unique option for a quick meal.

Not only will dining in Beast’s Castle in the New Fantasyland area of the Magic Kingdom allow you to witness the Enchanted Rose or meet the Master himself, but it will also finally give you an opportunity to “try the grey stuff” like you have wanted to since Beauty and the Beast graced the silver screen. You can try this grey stuff both at lunch and at dinner when you order the Master’s Cupcake, which is a chocolate cupcake topped with this unusual delicacy – a cookies and cream mousse. After trying this dessert unique to the Magic Kingdom, you’re sure to say “It’s delicious!”

Lastly, we have zebra domes. Found within the walls of two restaurants at the Animal Kingdom Lodge – Mara and Boma – zebra domes are an unusual dessert that cannot be found elsewhere on Walt Disney World property. These bite-size desserts are a creamy mousse over a shortbread wafer. They taste like nothing you’ve ever tried both in consistency and flavor, because the vanilla mousse is flavored with another mousse made with Amarula Cream Liquer, which is derived from the African Marula tree. These tiny gems are then drizzled with chocolate syrup to resemble the animal for which they are named.