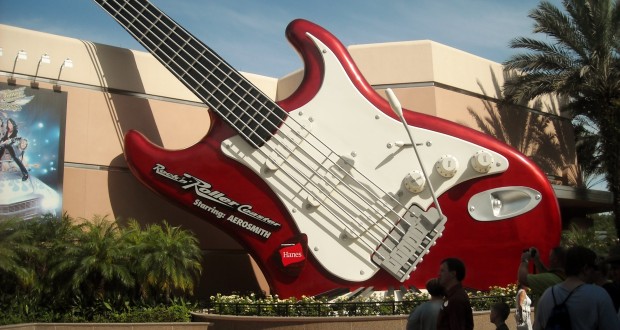 14 Things You May Not Know About Disney’s Hollywood Studios

Disney’s Hollywood Studios places you “in the movies” as you stroll down its streets, ride its attractions, and enjoy its entertainment. Disney Imagineers use all the tricks of the trade to create theme park magic for their guests. Some tricks are obvious while others are hidden, but if you know where to look, you can discover them. To begin your hunt for these hidden gems, consider the following fourteen things you may not know about Disney’s Hollywood Studios.

After passing through security and entering the park, check out the gas pumps at Oscar’s Super Service. Don’t try to pump any gas, though, because these tanks are dry. The pump on the right displays the opening date (May 1, 1989) of the theme park, then known as Disney-MGM Studios.

In the tradition reminiscent of Disneyland and Magic Kingdom, the second floor windows above Hollywood and Vine feature messages that only careful observers notice. One window refers to “Eddie Valiant, Private Detective,” the protagonist from Who Framed Roger Rabbit? Another window displays a sign advertising office space for rent, a reference to a sign Walt and Roy noticed above a real estate agency while looking for work space early in their careers.

The dinosaur shaped ice cream shop sitting at the edge of Echo Lake is modeled after a character from one of the earliest animated cartoons. Gertie the Dinosaur (1914) is the animated short by Winsor McCay that profoundly influenced the young Walt Disney, ultimately leading to his own projects with Oswald the Lucky Rabbit and Mickey Mouse.

The depiction of Mickey Mouse as a Pharaoh with Donald Duck as his servant is not easy to find. While riding The Great Movie Ride, you can spot a hieroglyph of this scene in the Raiders of the Lost Ark sequence. As you approach Dr. Jones and Sallah lifting the Ark of the Covenant to your right, look instead to the left and search the hieroglyphs to find them. Other hidden scenes feature Star Wars characters, C-3PO and R2-D2.

The Casablanca section of The Great Movie Ride features a real Lockheed Electra 12A airplane, or at least its front half. Imagineers fashioned the other half into a crash scene for the Jungle Cruise in Magic Kingdom. If you have tickets with the Park Hopper Option, you can visit the entire plane in the same day.

The Indiana Jones Epic Stunt Spectacular! brings the thrilling action of the epic film, Raiders of the Lost Ark, to its audience. At the beginning of the show, Indiana Jones’s stuntman must outrun a gigantic boulder to avoid being crushed to death…or so it seems. Even though it appears that cast members effortlessly roll the 12-foot diameter boulder made of rubber back into place after the stunt, it’s not light at 440 pounds.

Along the pathway to the Indiana Jones Stunt Spectacular!, you may notice the curious sign warning you not to pull the rope. The rope is tied off to a fence with the other end hanging in an excavation site. Actually, the “not” is crossed out, so feel free to pull it. You’ll hear a reaction from voices down below.

This popular attraction is the first roller coaster to be successfully synchronized to music. Others have tried it before, but screams, shouts, and ride noise drowned out the music. Also, Rock N’ Roller Coaster is Disney’s first launch roller coaster, catapulting its “super stretch limos” from zero to 57 miles per hour in less than three seconds, and its first to feature inversions.

Disney maintains a total of six “super stretch limos” in its Rock N’ Roller Coaster fleet with five kept in rotation and one always in refurbishment. Though you may be excited about your upcoming ride, pay attention to the license plates while you’re waiting in line. Each limo displays a different number, which indicates which Aerosmith songs are played during the ride.

The Twilight Zone Tower of Terror contains many secrets for park guests to discover. Some visitors wonder how Rod Serling, the host of The Twilight Zone, could’ve narrated the pre-show since he passed away in 1975. Actually, Disney took scenes from the episode, “It’s a Good Life,” and used an actor who sounded like Serling to add lines. Most of the other secrets are tributes to the show, although there is a peculiar reference to “Porcelains of Europe” being “susceptible to earthquake damage.” Imagineers purchased porcelain for the attraction, but the collection was damaged during the Northbridge earthquake in 1994.

The elevator engines in the Tower of Terror are so massive (12-feet tall and 35-feet long each) that they were sealed inside the building. The construction crew lifted each 132,000-pound engine into place by crane and built the attraction around it. These engines accelerate 15 times faster than the world’s fastest elevators, reaching a top speed of 39 miles per hour, which is faster than the acceleration of gravity. In other words, you’re not falling down an elevator shaft, you’re actually being pulled downwards by an engine.

Want to wow your friends and family with an insanely high score at Toy Story Midway Mania? The best way to achieve this goal is to find the “Easter eggs” hidden in each game. When struck, these eggs unlock high-value targets. For example, in the first game, hit the fox on the chicken coop at the bottom corner of the screen to release chickens worth 1,000 points each. You can also hit the tiny rat on top of the barn to cause the barn to flip, revealing several rats worth big points.

Walt Disney World is known for its perfect, pristine image. While this is true for most of what you see, the 1.9 million gallon moat used for Fantasmic! contains not-so-pretty algae. Though the water is filtered and treated, Disney maintains algae in it to mask the fact that it’s only 18 inches deep. You didn’t really think that all those boats were floating through the water, did you? There would be too many opportunities for collisions. 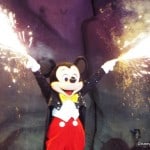 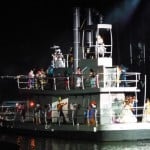 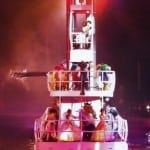 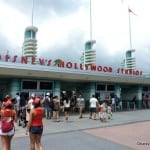 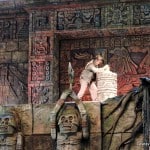 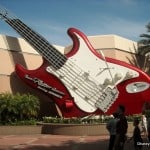