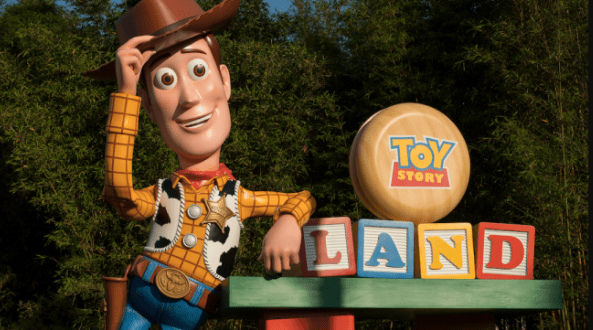 With the Pixar Pier open and the accompanying Pixar Fest at Disneyland Resort in California, and the opening of Toy Story Land at Walt Disney World. . . there is a lot of excitement about Pixar. I think it can be fun to theme a day of your vacation around a particular thing, and doing all things Pixar would be a very fun way to experience the parks.  Here are 12 ideas to add some Pixar to your day at Walt Disney World:

This 4D film presentation featuring your favorite creepy-crawlies from A Bug’s Life is found under the Tree of Life (appropriate spot for bugs, right?).  Through this film Flik attempts to convince the audience of all of the redeemable qualities of bugs.  It should be noted that this attraction can be scary for adults and downright terrifying for kids.  The last time I went I knew what to expect but they loud screams from the audience proved that yes, it is scary.  The 4D includes “feeling” bugs, and the appearance by the villain Hopper can be intimidating.  But, if you are a big fan of Pixar’s second film, A Bug’s Life you should see this attraction.

Back behind the jumping fountains at Epcot’s Imagination Pavilion is one of the hidden gems of the park:  the Disney & Pixar Short Film Festival.  Hosted in the theater that used to feature Captain EO and Honey I Shrunk the Audience, this 4D movie experience is a great new way to experience some of the great short films from the Pixar collection.  The Shorts shown vary, but they are all great.

One of my favorite shows at Animal Kingdom was always Flights of Wonder featuring the amazing birds of the world.  Recently reimagined, you can now experience these birds up close & personal with the help of Russell and Dug from Up.  You can find the show in Asia.

Finding Nemo the Musical at Animal Kingdom is a gorgeous production done with puppetry as a re-telling of the Finding Nemo story.  Sure to delight any Pixar Fan, the show features your favorite characters with a Broadway caliber soundtrack to convey the story of Nemo getting lost from Marlin and the two finding their way back to each other.  The colors, the artistry, the music and the performers make Finding Nemo the Musical a can’t miss show.

While you are at Animal Kingdom stop on your way in to be sworn in as a Wilderness Explorer just like in the Pixar Film Up!.  Some of Russell’s troop mates are on the bridge as you enter Discovery Island to give you your badge, your book and send you on your way to explore the wilderness of the Animal Kingdom collecting badges along the way as you learn about nature, animals, and the environment.  And kids LOVE to do this—my 6 year old spent one day at Animal Kingdom just earning his Senior Explorer badge.  And at the end don’t forget to stop by and meet Russell himself (& maybe Dug will be with him)!  Caw! Caw! Roar!

Woody’s Lunch Box, the quick service eatery in Toy Story Land in Disney’s Hollywood Studios, is serving up some of the best grub in the park.  To truly experience Pixar in the parks, mosey on over and sample one of the tempting menu items like the Monte Cristo Sandwich, the S’mores French Toast Sandwich (at breakfast), or the Chocolate-Hazelnut Lunch Box Tart.  Go ahead and sample all of it!

5. The Seas with Nemo and Friends, Epcot

The entire Seas with Nemo and Friends Pavilion is custom made for fans of Pixar’s Finding Nemo and Finding Dory films.  You start off your adventure in the queue for the ride walking down the beach and into Nemo’s underwater world (keep your eyes open for hints and details from the films).  Once you are on the attraction you are once again trying to find Nemo, and run into some of your favorite friends from the movies.  After the ride you can walk around and enjoy all of the aquarium viewing windows (you may just find Nemo or Dory swimming around), or let kids play in Bruce’s Shark World.  Another big hit for kids is Turtle Talk with Crush located right there in the pavilion.  This interactive show allows kids to ask Crush questions about his life under the sea, you know a 150 year old turtle knows a lot of stuff dude.

One of Pixar’s first appearances inside the a Disney Theme Park, Buzz Lightyear’s Space Ranger Spin in Magic Kingdom’s Tomorrowland squares you off against the Evil Emperor Zurg to score points and save the Galactic Alliance.  This fun dark ride is a family favorite (especially for those with a competitive side) allowing you to take control of your ride vehicle to spin and aim at the targets, then shoot your laser beam to score points.  What is your top score?

Toy Story Land in Hollywood Studios is an immersive experience shrinking you down to the size of Andy’s toys like the Green Army Men.  The perennial favorite, Toy Story Mania is now part of this new Land.  Like Buzz Lightyear’s Space Ranger Spin, Toy Story Mania allows you to interact and compete against your riding partner in various 3-D carnival type games.  It’s a rootin’ tootin’ good time!  The new Slinky Dog Dash coaster is where you board Slinky Dog himself to race around the track through Andy’s toys.  You can also find Alien Swirling Saucers, a spinning ride similar to the tea cups but closest to Mater’s Junk Yard Jamboree in California Adventure’s Cars Land. Both are family-friendly fun and a great way to enjoy your favorite Toy Story Characters at their size.  This is a very popular area for families!

2. Stay at Art of Animation Resort

One of the most highly themed resorts at Walt Disney World is Art of Animation where families can enjoy a little extra room in the very well designed Family Suites.  Art of Animation consists of 4 areas or themes, and two of those are related to Pixar Films:  Finding Nemo and Cars (and these happen to be my 2 favorite sections of the resort).  The design here is incredible and you truly feel like you’ve stepped into the animated features as you walk around outside the resort.  In the Cars area you’ll find the Cozy Cone motel which in this setting is covered cabanas around a “quiet” pool.  All of the Cars characters are out on the road and make for the perfect backdrops for photos.  My 6 year old LOVES this resort, and could spend an afternoon just walking around looking at everything.  In the Finding Nemo area you’ll feel like you are under the sea with Crush, Marlin, Nemo & Dory.  Everything from the larger than life statues, landscaping that looks like seaweed and coral, and the Seagulls atop the buildings shouting “Mine! Mine! Mine!” immerse you in the movie.  The main feature pool for the resort is found here (appropriately), and when you go under water listen . . . you just may hear some familiar fishy voices.  Inside the rooms the theming doesn’t stop with each section’s suites designed in colors and patterns to look like it’s Pixar Movie. Plus, take advantage of the Disney Skyliner, the complimentary gondola-style transportation system that goes to and from Epcot and Hollywood Studios. Art of Animation resort is the perfect back drop for your Pixar themed Walt Disney World vacation.

I don’t think you can get much closer to a Pixar film than to meet your heroes in person! Buzz, Woody, and Jessie are meeting their friends in Toy Story Land, so be sure to line up to say hello. You’ll also find the Green Army Men patrolling this area! Edna Mode from The Incredibles is available just outside of Toy Story Land. You can even meet Mike and Sulley from Monster’s Inc. at Hollywood Studios. Pixar characters are at Magic Kingdom too! Merida is by the Castle (toward the Tea Cups) and Buzz Lightyear stand near his attraction, Buzz Lightyear Space Ranger Spin. Russell, Dug and Kevin are over at Animal Kingdom. So many characters not to be missed!