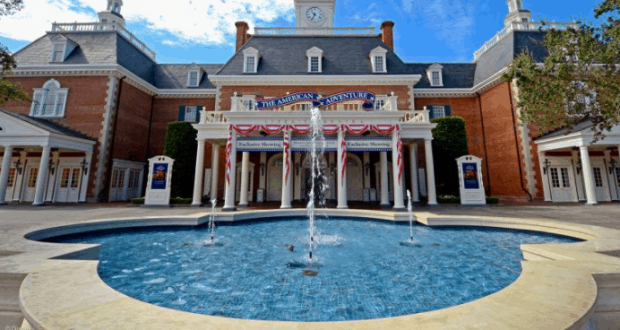 If there is one place that can evoke big feelings in anyone, it’s Walt Disney World. From the magic of childhood to the amazing love we all have for our families, this is the place that can pull our biggest and best emotions from our hearts. For this reason, Disney World is a great place to go to feel patriotic. Of course, in order to feel this dramatic patriotism, you will need to experience the right things while at Disney World. There are a number of great WDW attractions that can evoke patriotic feelings in nearly anyone. Here are our favorites.

1. The Hall of Presidents

Let’s start with what is quite possibly the most patriotic theme park traction of all time. The Hall of Presidents in Magic Kingdom is a great tribute to our country and the great leaders we’ve had throughout the years. Make sure to also see the awesome gallery in the lobby of the theater to round out the experience. The American Adventure is located in Epcot and is the only attraction on this list that rivals the Hall of Presidents in terms of patriotism. With a strong American theme, some seriously amazing storytelling, and an accurate account of many of our country’s early years…well, let’s put it this way: If this show doesn’t make you feel some American pride, we don’t know what will.

Usually found in the lobby of The American Adventure, the Voices of Liberty is an awesome musical group that sings many patriotic songs that every American will know and love. Listening to their amazing harmonies is sure to evoke strong emotions about our country and leave you feeling proud to be an American. While there is not one attraction in the area that feels distinctly patriotic, we have to say that simply strolling through Frontierland in Magic Kingdom does send you back to America’s simpler times. Its Wild West theme very clearly communicates the adventurous feeling of 1800s America, and certainly makes you feel proud of the brave men and women who helped cultivate the wild lands of the west to build the America we know today.

If early America interests you, then you’re sure to love dining at Liberty Tree Tavern in Magic Kingdom. This colonial-themed eatery sends guests back in time with waitstaff dressed in period clothing, a menu filled with era-appropriate foods, and decor that certainly feels like something out of the 1700s. Eating here will make you feel as though you’re a part of the American Revolution, something that will definitely leave you feeling at least a little patriotic.

We’ve already listed three Liberty Square attractions in this article. That said, even just walking through this small Magic Kingdom land is sure to ignite the American spirit in you. Everywhere you look, there are signs of the fight for freedom, reminding us just how lucky we are to be Americans. Very few things are quite as American as the Carousel of Progress found in Magic Kingdom’s Tomorrowland. This awesome attraction follows a typical American family throughout the 20th century as they acquire new gadgets and conveniences. It’s the perfect way to get a peek into American life through the ages, and can easily pique a guest’s interest in American history.

For the most part, Muppet*Vision 3D in Hollywood Studios is just what you’d think: a silly show filled with gags and other typical puppet humor. However, the end of the show is a grand finale that Sam Eagle proudly calls, “A Salute to All Nations…But Mostly America.” This is of course quite silly, but the music, fireworks, and general patriotic feel of the final number does give some warm fuzzies as well.

A quaint example of classic Americana that leaves every American feeling just a bit nostalgic, Main Street, U.S.A. in Magic Kingdom is a great place to spend some time basking in America’s glory days. Visit some turn-of-the-century shops, grab a hot dog from the corner restaurant, and be sure to catch the flag retreat at the end of the day.

Finally, we must mention the incredible Independence Day fireworks displays put on by the parks each summer. If you’re willing to brave the crowds, the shows at Magic Kingdom and Epcot are both patriotic performances, and both are absolutely spectacular!