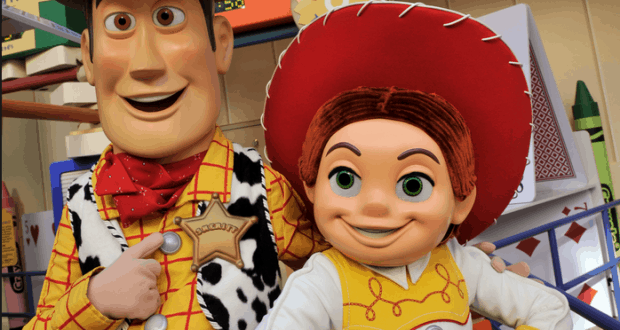 Finding the characters you want to get a picture with, or perhaps an autograph from, can make your Disney World vacation an extra special experience. Below is a list of the hardest characters to find in a meet and greet situation. You will find the Disney characters very welcoming and worth waiting in line for. Check the official Disney website for the more common characters schedules or just pick up a Times Guide for the park as you enter to see who, where and when to catch them. Any Cast Member should be able to answer your question about where to find a character in their park.

10. The Beast from Beauty and the Beast–Although you may expect to see Belle and Beast at Storytime with Belle, the actual Beast does not share in that experience, nor does he appear with Belle in France at Epcot’s World Showcase. You won’t find him outside his castle either. You will only be able to meet him for photographs at Be Our Guest during dinner time.

8. Genie and Abu from Aladdin–they come out only for hard ticket events such as Mickey’s Not So Scary Halloween Party and Mickey’s Very Merry Christmas Party. You can meet Aladdin and Jasmine in Morocco, Epcot, or Adventureland daily.

6. Bert appears with Mary Poppins and Mr. Penguin only appear together during Mickey’s Very Merry Christmas Party. Mary Poppins has been seen on Main Street at the Magic Kingdom or in the United Kingdom pavilion at Epcot’s World Showcase.

4. Jane Porter, Tarzan and Terk from Tarzan appears in Adventureland during Mickey’s Not So Scary Halloween Party. You will find them on the Verandah just after crossing into Adventureland from the Cinderella Castle hub.

2. Mike Wazowski and Sulley from Monsters Inc. appear near the Streets of America, at Disney’s Hollywood Studios.

1. Pocahontas can sometimes be found on Discovery Island at Disney’s Animal Kingdom but she is difficult to plan on since her appearances are somewhat random.