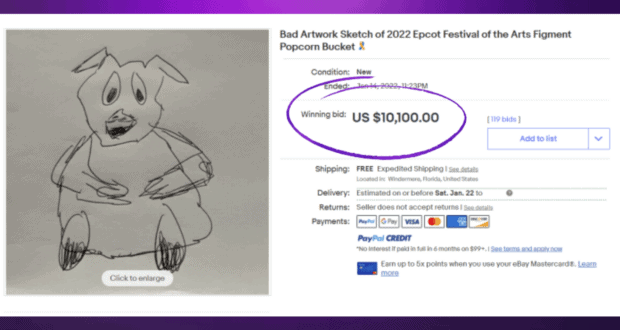 The Figment popcorn bucket craze has been all over social media and the news since the adorable purple plastic buckets became available on Friday, the first day of EPCOT’s International Festival of the Arts.

The buckets were available at Pop Eats inside EPCOT at the festival, and lines to get one on Friday would cost you between four and six hours of your park day. Some who were willing to spend that kind of time in line just for the honor of having Figment hold their popcorn left the park that day with a sense of completion and fulfillment. Others found their fulfillment by purchasing far more than the number of buckets allowed per Guest, taking them home, and listing them on sites like eBay, Mercari, and Poshmark for as much as $200 apiece.

Other Guests were completely selfless with their buckets, waiting four or more hours in line, just purchase the Figment buckets as gifts or–better yet–to give “just because” to a Guest at the back of the line for the buckets, like this man, Jason M., who bought a bucket for his mom for her birthday and a bucket to give away. The recipient was in shock. Grateful, but shocked. 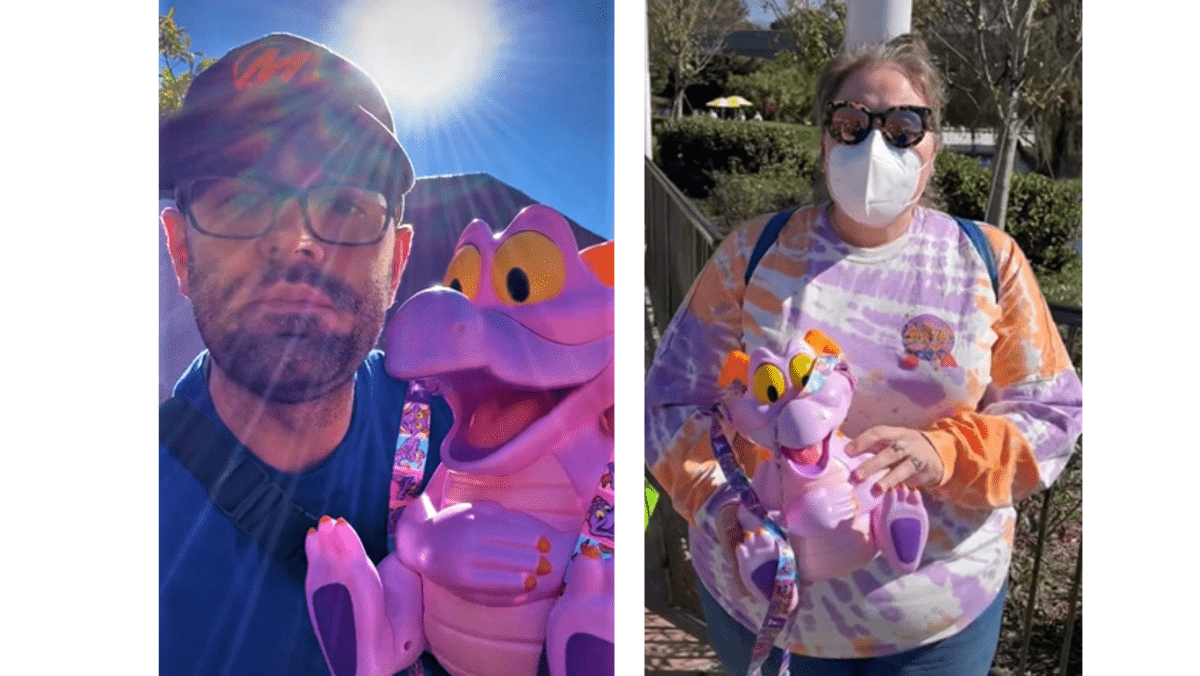 And you’ll be shocked to know that according to Guests in the park today, the lavendarly-adorable Figment buckets are ALL SOLD OUT.

But the most shocking thing you’ll hear today about the Figment popcorn buckets is that some are being sold on eBay, but not as actual buckets. Rather, bids are being placed on drawings of the Figment buckets. (And, admittedly, some of the drawings aren’t even very artistic.)

Just when we thought 7 hours in line for a Figment bucket was the craziest part of the dragon-bucket craze at EPCOT this weekend, we heard something that takes “craze” to a whole new level, but the amazing part is that this part of the phenomenon will benefit charity.

Some people took to eBay to list drawings, sketches, and even photos of the coveted Figment bucket. One of the drawings listed actually had the words “bad artwork sketch” in its listing title. The listing required an opening bid of $0.99 and opened on Friday morning at 11:16 a.m. local time. Almost immediately, eBay users began bidding on the drawing of the bucket.

Bids came in regularly until the total amount bid reached $10,000. Yes, ten thousand dollars. You can see the bid amount in the eBay screenshot below:

All of the proceeds from the sale of the “bad artwork sketch” were to go to charity, as stated in the listing. But sadly, the owner of the listing had to end the bidding and take down the listing due to some questions about the authenticity of the bids, according to a post from the seller himself/herself:

“I’m skeptical of the series of automated bids that pushed this over the $10K mark, so I’m ending the auction so I can start the clock going on having them pay eBay to give the money to Habitat for Humanity. If the high bidder is legit, I’m so thankful for your generous donation. If not, then we’ll go through the proper channels to get everything settled and get money to Habitat.”

Hopefully, the bids were legitimate, and the bidder will follow through with his or her donation, which will benefit the efforts of Habitat for Humanity. According to the seller’s post, the bidder–if authentic–can go through eBay to make the donation directly to the charity.

Wouldn’t that be an amazing thing? And it all began with an adorable plastic bucket that looks just like Figment!

2022-01-17
+Becky Burkett
Previous: Hoping to get one of those Figment Popcorn buckets? We have some sad news . . .
Next: Best Places to Stay Cozy in the Parks