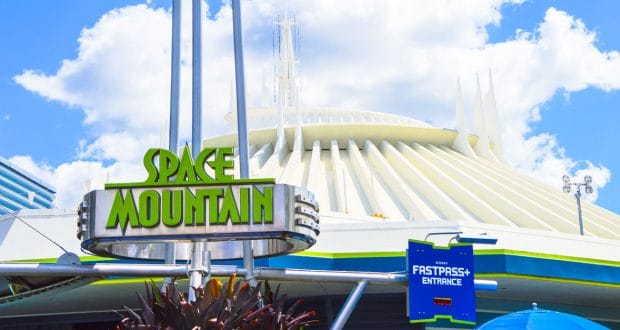 7. This was the world’s first completely indoor roller coaster. There are now Space Mountain attractions, although each a bit different from the other, they still share this element of being an indoor coaster, in every Disney park around the world.

6. This was a landmark in roller coaster technology being the first controlled by a computer. Space Mountain has brake zones that can determine the weight in each rocket ship and control how fast it will move down the track, depending on where the other ships are on the track. This is commonplace today, but almost 40 years ago it was ground breaking. This finally brought the technology Walt needed to make the Space Mountain he had dreamed about a decade earlier.

5. A Mercury 9 and Gemini 5 astronaut, Gordon Cooper, became part of the design team for this attraction because he wanted to bring his experiences with NASA to make the attraction more lifelike. With the help of Gordon Cooper Disney has created an attraction that still is the most popular almost 40 years later.

4. Walt had the vision for this ride in the ‘60’s but the technology required for this type of attraction did not support his vision, not at least until the mid 1970’s. Walt was a big supporter of the Space Race and always wanted space-themed attractions in his parks. Walt Disney was always a forward thinker and either invented something on his own to make his dream come true, or found people that could help him with it. Space Mountain was Walt’s idea and helped meet the need for thrill rides in his parks. The immediate and lasting popularity of Space Mountain in the teens to adult category proved more thrill rides were needed in the parks. When the attraction opened guests were encouraged to experience the pre- and post-show without riding, and without using their E-ticket. This gave guests a “free” way to experience part of Space Mountain without giving up that precious E-ticket.

3. It has an unmistakable appearance. Guests view Space Mountain from a variety of perspectives, such as from the Monorail, Ferry Boat, walking, onboard Tomorrowland Transit Authority People Movers, or perhaps from their rooms at the Contemporary resort. Space Mountain has the same basic appearance, although with different colors or finishes, at each one around the world. Approaching Space Mountain in the early years we saw RCA’s logo high above it and one of the rocket ships on display holding two adult astronauts and two children astronauts who look like they are really enjoying themselves. Below them there was a plaque that read “ONE GIANT STEP…Dedicated to the men and women whose skills, sacrifice, courage and teamwork opened the door to the exploration of man’s exciting new frontier…outer space. Because they dared to reach for the stars and the planets, man’s knowledge of his universe, earth and himself has been greatly enriched. Presented by missile, space and range pioneers. January 15, 1975.”

2. To make sure Space Mountain did not take away from the splendor of Cinderella Castle, the attraction sits about 15 feet below the rest of Tomorrowland. Part of being so low in the ground means you descend into the queue tunnel that is dark, but has great air-conditioning. The queue runs below the ride track and leads you to the load area on the opposite side of the building. If you enter on the Standby side you will find some interactive training games to get you ready for space travel. Using video gaming technology to maneuver your way through three different tasks: targeting troublesome asteroids threatening your ship, getting space junk out of your way, or taking cargo from one area of your ship to another. Each of these tasks takes about 90 seconds each and are spread down the queue giving you an opportunity to try another one. These training stations can be used by up to 86 players at a time. Moving along you find your way to the neon lights of the space station, control tower and launch pad.

1. You board your rocket ship, which holds three people in single file, separate seats, with lap bars, two ships travel together. The secret experience of this ride is that you feel almost like you are traveling this space mission alone. You sit in your own seat and because of the darkness, after you “launch” you no longer see your rocket ship mates. It feels, to many riders that they are flying alone through space. You travel first through a pulsating light tunnel, and then 180-feet into the air. You begin to descend into total darkness. You will hear space age music, as you travel through space. As your eyes adjust to the blackness, you begin to see stars, satellites, comets and meteors that you whiz past. You experience dips in the track, more hills and drops, and sudden turns. Before we can reenter earth’s atmosphere we experience the wormhole. The longest drop is 18-feet. The speed is only about 28mph, depending on the weight, but can feel as much as 40mph due to its setting in the dark.

More about the attraction:

Although the ride now warns that it “May be too intense for very young children” I remember taking my 3 year old on this ride, yes, it was possible in the late 1980’s. She hated the first ride, but by the time we were ending our Walt Disney World vacation, she wanted to ride it again. That is, in fact, the response that most riders have to Space Mountain, that they want to ride it again! Today, if your child is under 44” they cannot ride and if they are under 7 years of age, they must have an adult ride with them. (Note: the ride vehicles were a different design when my daughter first rode it and it allowed for both her height and her age. She now has kids of her own and she still loves to ride Space Mountain. It is her personal must-so ride at Magic Kingdom.)

I think it is important to obey the safety warnings for every ride at Walt Disney World. Don’t try to force your child onto a ride, or misrepresent the ride to them, it is unnecessary since Rider Switch exists where one parent can stay with the child while the other parent rides, then they switch off with the second adult going on through FastPass+ queue. The ride warnings and restrictions are based on the current form of the attraction. Track changes, speed changes, ride vehicle changes, and new science all shape the current safety warnings.

Attraction details:
• Tomorrowland section of Magic Kingdom at Walt Disney World
• 44” height requirement
• Thrill ride with big drops, in the dark, at reaches speeds up to 28.7 mph
• Duration: 2 ½ minutes
• 60 speakers deliver “Starry-O-Phonic Sound” of space travel and music
• Has two tracks: named Alpha and Omega (Alpha is 3,196-feet long; Omega is 3,186-feet long)
• First coaster to be completed controlled by computers
• Walt Disney World holds the first Space Mountain in any Disney park
• The attraction is 180 feet high, 300 feet in diameter
• The ride track height is 65 feet and length is 3186 feet
• New track in 2009 (no change to layout) MK1 TOMORROWLAND STATION
• Steel track
• There is a Space Mountain in every Disney park around the world
• Capacity is 900-1200 guests each hour with one track open, 2057-2500 guests per hour with both tracks open

Ride Vehicle:
• Shaped like a rocket ship
• 3 Riders are in single file in each rocket ship, two ships connected
• Guests in ECV’s must be able to transfer, first to a wheelchair, then to the ride vehicle in order to ride.

TIP: If you are taking a child on the ride, make sure they understand that they will not be riding in the same seat as you. You will sit in the same rocket, but in individual seats with your own ride restraints.

Gift Shops: The attraction exits into a gift shop with space-related souvenirs and a D-Tech area to design MagicBands and cell phone cases plus more.

Restaurants: Tomorrowland Terrace Restaurant, Cosmic Rays Starlight Café are both counter-service food locations not far from Space Mountain. Cosmic Ray’s offers a big variety of items and they are open year round. Tomorrowland Terrace is open seasonally, so check your park Times Guide to see if and when they are open. There are quick service carts nearby and The Lunching Pad, under Astro Orbiter and PeopleMover, ice cream or breakfast items at Auntie Gravity’s Galactic Goodies are all pretty close to Space Mountain in Tomorrowland. There are packaged snacks, sweets, and bottled beverages in the Space Mountain gift shop.

Cast Member costumes: black pants and light gray shirts with black and dark gray accents
Restroom: closest one is in the building just to the right of Space Mountain, as you are looking at the front of it.
RATING: This is a must-do classic Walt Disney World ride! 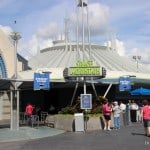 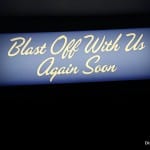 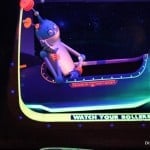 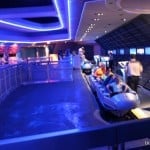 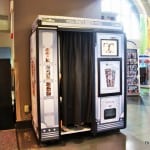 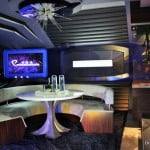 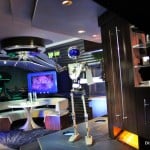 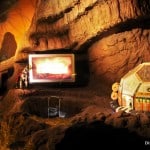 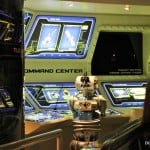 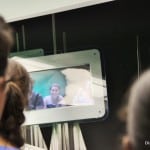 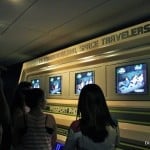 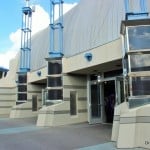 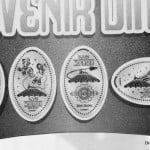 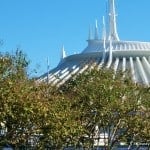 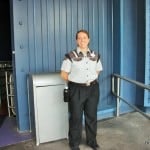 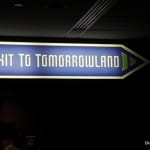 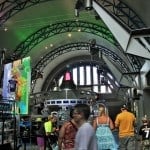 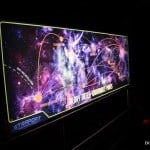 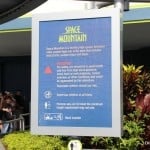 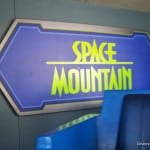 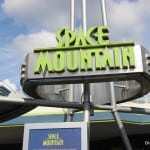 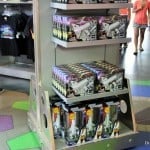 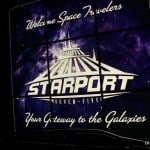 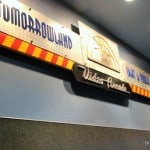 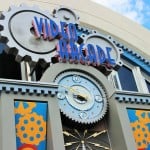 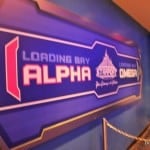 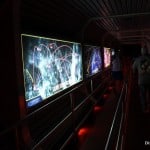