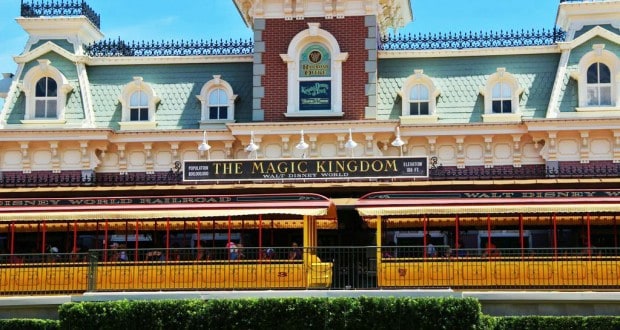 10. 5 Miles – The Walt Disney World Railroad runs along the entire exterior of the Magic Kingdom in a massive 1.5 mile loop. Many guests might notice the various trains rumbling by at different vantage points in the park, but many don’t realize just how much distance they travel. Guests who choose to enjoy the entire loop around the park are treated to a twenty minute relaxing journey that offers some beautiful views of attractions like Big Thunder Mountain Railroad and The Tomorrowland Speedway that guests can’t get anywhere else.

9. Antique Trains – There are four different trains in operation daily on the Walt Disney World Railroad and they are all authentically steam powered! Originally built between 1916 and 1928, the four trains were found and painstakingly restored by Disney. All that hard work paid off in the four beautiful trains that guests get to enjoy today.

7. Lilly Belle – Walt Disney’s wife Lillian was his constant loving companion for decades of marriage and it is fitting that one of the four steam trains of the Walt Disney World Railroad is named after her. While Lillian died in 1997, guests can still honor her every day in the Magic Kingdom by enjoying a loop of the park on her namesake.

6. Roy O. Disney – The third steam train is named after another integral member of the Disney family who not only was a great friend to Walt, but a business partner and collaborator. Roy was Walt’s brother, and his business partner from an early age. After Walt Disney’s death in 1966, it was Roy who continued to help make the dream of Walt Disney World a reality and who delivered the dedication speech on the Magic Kingdom’s opening day in 1971. Roy died shortly after the opening of the Magic Kingdom, but guests can still honor him today.

5. Roger E. Broggie – The fourth and final steam train of the Walt Disney World Railroad is named after a man who literally was responsible for the existence of the attraction. Broggie began his career with Disney as a machinist helping to work the multiplane camera used in animation. Broggie eventually went on to contribute in the creation of the Walt Disney World Railroad by leading the restoration of the trains ultimately resulting in one of them being named after him.

4. Three Stations – Many guests know that the Walt Disney World Railroad exists since they have to pass under its tracks to enter into the Magic Kingdom, but some don’t realize that there are three stations scattered throughout the park. There is the Main Street Station, the Frontierland Station located next to Splash Mountain, and the Storybook Circus Station located next to the Barnstormer. A great way to enjoy some time on the attraction is to hop on at one of the stations and take a relaxing ride to another area of the park. This allows guests a chance to get off their feet, effectively move throughout the park, and enjoy the ride!

3. Carolwood Pacific – Walt Disney was a massive train and locomotive enthusiast, and one of his earliest endeavors into using them as attractions happened in his own backyard. Disney had the Carolwood Pacific built in 1950 and it featured a scaled down steam powered train which could be ridden and enjoyed by his guests. Disney so loved the idea of transporting his guests around via steam train that the idea for the Disneyland Railroad and eventually the Walt Disney World Railroad was born.

2. Character Props – Guests who board or disembark at the Main Street Station can check out a shelf inside that holds various interesting props. Upon closer inspection, each of these props is connected to a memorable Disney character. Guests can have a lot of fun figuring out which prop belongs to who!

1. A Special Message – Also found in the Main Street Station is a special audio clip which pays homage to the opening of the Magic Kingdom. Guests who listen closely might pick up on a clicking noise that might not sound like anything special. This noise is actually Morse code and features the entre dedication speech given by Roy O. Disney.